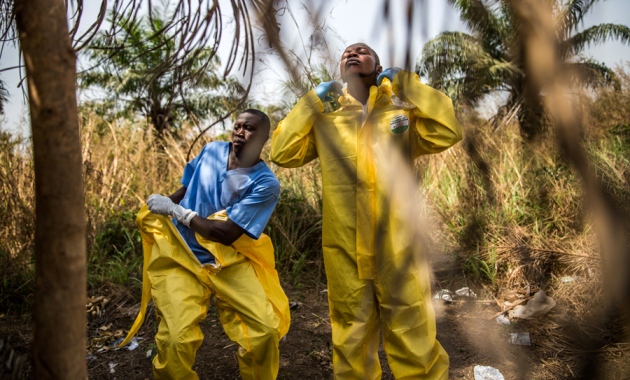 Sierra Leone is one of the countries hardest hit in the current Ebola epidemic.

The Ebola virus evolved as it spread through West Africa last year — but its mutation rate did not accelerate, as some had thought, according to an analysis of genetic sequence data published on 13 May in Nature1. The data offer reassurance that the scope of the current epidemic did not make it possible for the virus to evolve into a more virulent or deadlier form.

The virus's evolution rate during the current epidemic, and whether it is changing in ways that make it easier to transmit, or more or less lethal, has been hotly debated. To address these questions, a team led by Wu-Chun Cao, an epidemiologist at the State Key Laboratory of Pathogen and Biosecurity in Beijing, sequenced 175 Ebola virus genomes from people who were infected with the virus, including some who died.

The samples were collected between 28 September and 11 November 2014 by the China Mobile Laboratory Testing Team, a diagnostic lab deployed by the Chinese government. Cao’s group combined the sequencing data from these specimens with sequences published in August by Pardis Sabeti, a computational geneticist at the Broad Institute in Cambridge, Massachusetts, and her colleagues2. Sabeti's study examined virus samples collected from patients in May and June. The combined data allowed Cao and his colleagues to track how the Ebola virus changed as it spread east to west across Sierra Leone. Ebola entered the country in May and reached the capital city, Freetown, in July.

The analysis finds that the virus evolved as it spread to new areas. But it did not change at a faster rate than it has in past outbreaks — even though those outbreaks were localized to much smaller areas and infected fewer people. And there is no evidence that Ebola evolved harmful mutations as it spread through Sierra Leone. “This is just the virus doing what it does,” says David Robertson, a computational and evolutionary biologist at the University of Manchester, UK.

Cao’s team reports that the virus continued to evolve more diversity as it spread, meaning that the viruses involved in each localized outbreak evolved independently of each other. “As the epidemic spread, it created many chains of infections, each of which was mutating in a different direction,” says viral geneticist Trevor Bedford at the Fred Hutchinson Cancer Research Center in Seattle, Washington.

Cao’s team catalogued a total of 440 new mutations, and found that changes occurred most often in Ebola's glycoprotein gene, which encodes instructions for the surface protein that helps the virus attach to human cells. This could mean that human immune response was driving the virus's evolution, or it could be down to chance. “It’s surprisingly difficult to gauge functional change from sequence data alone,” Bedford says.

Other researchers continue to examine such shifts as more data come out; for instance, Robertson has noted that in Sabeti’s data, many of the genetic changes that could potentially alter the virus's function occurred in regions that are more likely to affect how the virus interacts with human cells3. “It would be interesting to see if this is still the case” in the latest data, Robertson says.

The paper by Cao and colleagues greatly increases the publicly available data on Ebola viruses, but there is still a paucity of sequence data from Guinea and Liberia. That appears to be changing, however: a consortium led by Public Health England has released sequencing data on 179 Ebola samples collected in Guinea by the European Mobile Laboratory consortium.