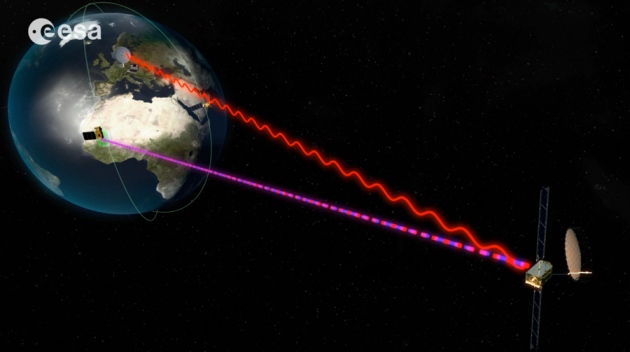 Lasers will allow Alphasat to collect information from other satellites.

Before NASA even existed, science-fiction writer Arthur C. Clarke in 1945 imagined spacecraft that could send messages back to Earth using beams of light. After decades of setbacks and dead ends, the technology to do this is finally coming of age.

Two spacecraft set for launch in the coming weeks will carry lasers that allow data to be transferred faster than ever before. One, scheduled for take-off on 5 September, is NASA’s Lunar Atmosphere and Dust Environment Explorer (LADEE), a mission that will beam video and scientific data from the Moon. The other, a European Space Agency (ESA) project called Alphasat, is due to launch on 25 July, and will be the first optical satellite to collect large amounts of scientific data from other satellites.

“This is a big step forward,” says Hamid Hemmati, a specialist in optical communications at NASA’s Jet Propulsion Laboratory in Pasadena, California. “Europe is going beyond demonstrations for the first time and making operational use of the technology.”

These lasers could provide bigger pipes for a coming flood of space information. New Earth-observation satellites promise to deliver petabytes of data every year. Missions such as the Mars Reconnaissance Orbiter (MRO) already have constraints on the volume of data they can send back because of fluctuations in download rates tied to a spacecraft’s varying distance from Earth. “Right now, we’re really far from Earth, so we can’t fit as many images in our downlink,” says Ingrid Daubar, who works on the MRO’s HiRISE camera at the University of Arizona in Tucson. Laser data highways could ultimately allow space agencies to kit their spacecraft with more sophisticated equipment, says John Keller, deputy project scientist for NASA’s Lunar Reconnaissance Orbiter (LRO). That is not yet possible, he says. “We’re limited by the rate at which we can download the data.”

Today’s spacecraft send and receive messages using radio waves. The frequencies used are hundreds of times higher than those put out by music stations on Earth and can cram in more information, allowing orbital broadcasts to transmit hundreds of megabits of information per second. Lasers, which operate at higher frequencies still, can reach gigabits per second (see ‘Tuned in’). And unlike the radio portion of the electromagnetic spectrum, which is crowded and carefully apportioned, optical wavelengths are underused and unregulated. 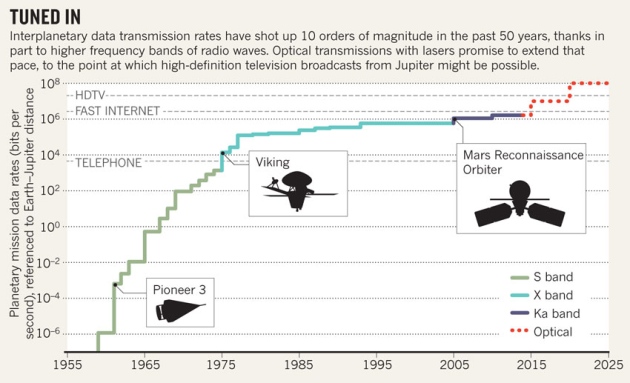 Efforts to develop laser communication systems struggled for much of the twentieth century: weak lasers and problematic detectors derailed project after project. But recent advances in optics have begun to change the situation. “The technology has matured,” says Frank Heine, chief scientist at Tesat-Spacecom, a company based in Backnang, Germany.

In the 1980s, Europe took advantage of improved lasers and optical detectors to begin work on its first laser communication system, the Semiconductor Laser Intersatellite Link Experiment (SILEX). Equipped with the system, the ESA satellite Artemis received 50 megabits of information per second from a French satellite in 2001and then exchanged messages with a Japanese satellite in 2005. The project taught engineers how to stabilize and point a laser in space. But it was abandoned after its intended application — a constellation of satellites to provide Internet services — was dropped in favour of the network of fibre-optic cables now criss-crossing the globe.

Since then, Heine’s team at Tesat-Spacecom has created a laser terminal for satellite-to-satellite communication, at a cost to the German Aerospace Center of €95 million (US$124 million). The laser, amplified by modern fibre-optic technology, achieves a power of watts — compared with the tens of milliwatts reached by SILEX. In 2008, terminals mounted on two satellites transferred information at gigabits per second over a few thousand kilometres.

ESA’s Alphasat will extend the range of this laser terminal to tens of thousands of kilometres once it is positioned high in geostationary orbit. Future satellites that sport laser terminals in lower orbits will be able to beam as much as 1.8 gigabits per second of information up to Alphasat, which will then relay the data to the ground using radio waves. Alphasat’s geostationary orbit means that it can provide a constant flow of data to its ground station — unlike low-Earth-orbit satellites, which can commuicate with the ground for only an hour or two each day as they race by overhead. “Other satellites will be able to buy time on our laser terminal,” says Philippe Sivac, Alphasat’s acting project manager.

One client will be another ESA mission due to launch this year: Sentinel-1, the first of several spacecraft to be sent up for Europe’s new global environmental-monitoring programme Copernicus. It will beam weather data to Alphasat until the end of 2014. At that point, Europe plans to start deploying a network of dedicated laser-relay satellites that will ultimately handle 6 terabytes of images, surface-temperature measurements and other data collected every day by a fleet of Sentinel spacecraft.

But Europe’s space lasers have a significant drawback. Although they can shuttle information between spacecraft, they have trouble talking to the ground — a task that must still be performed by radio waves. This is because these lasers encode information by slightly varying the frequency of light in a way analogous to modulating an FM radio station. A beam modulated in this way is protected from solar interference but is vulnerable to atmospheric turbulence.

“Laser communication becomes more advantageous the farther out you go.”

The laser on NASA’s upcoming LADEE mission will communicate directly with Earth using a different approach that is less susceptible to atmospheric interference. It encodes information AM-style by tweaking the amplitudes rather than the frequency of a light wave’s peaks.

NASA hopes that the LADEE demonstration will extend laser communications beyond Earth’s immediate vicinity, to the Moon and other planets. Deep-space missions currently rely on radio transmissions. But radio waves spread out when they travel long distances, weakening the signal and reducing the data-transfer rate.

In 1992, the Galileo probe, on its way to Jupiter, spotted laser pulses sent more than 6 million kilometres from Earth. A laser on Earth pinged the Mars Global Surveyor in 2005. Another struck the MESSENGER mission en route to Mercury, which responded with its own laser pulses. In January this year, the Lunar Reconnaissance Orbiter received the first primitive message sent by laser to the Moon — an image of the Mona Lisa that travelled pixel by pixel in a sort of Morse code.

LADEE carries NASA’s first dedicated laser communications system. With a bandwidth of 622 megabits per second, more than six times what is possible with radio from the distance of the Moon, the system can broadcast high-definition television-quality video. But even though its AM optical system is good at penetrating Earth’s turbulent atmosphere, it will still need a backup radio link for cloudy days when the laser is blocked. To minimize this problem, LADEE’s primary ground station is in a largely cloudless desert in New Mexico, with alternative sites in two other sunny spots: California and the Canary Islands.