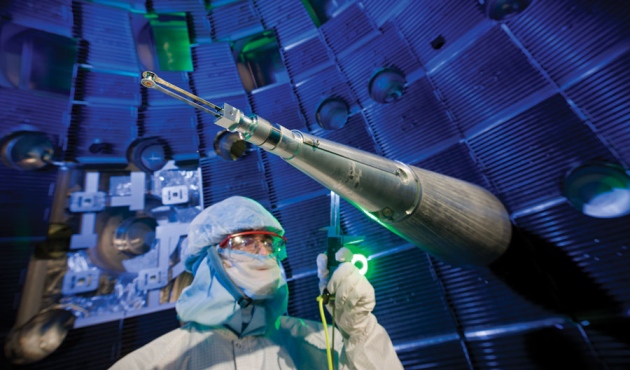 After an unsuccessful campaign to demonstrate the principles of a futuristic fusion power plant, the world’s most powerful laser facility is set to change course and emphasize its nuclear weapons research.

For the past six years, scientists and engineers at the US National Ignition Facility (NIF) have been working flat out to focus 192 laser beams on a gold-lined ‘hohlraum’ capsule, just a few milli­metres long, containing a pellet of hydrogen isotopes. As 500 terawatts of laser power hits the capsule, it generates X-rays that blast into the pellet, causing the atoms of deuterium and tritium inside to fuse. The fusion converts a tiny amount of their mass into a burst of energy (see ‘The NIF’s fusion strategy’).

The goal of the National Ignition Campaign (NIC) is reflected in its name: ‘ignition’, in which the fusion reaction generates as much energy as the lasers supply. Success, NIF officials say, could pave the way to developing a power plant that would implode nearly 1,000 pellets a minute (see Nature 483, 133–134; 2012). But unexpected technical problems left the NIF well short of its goal when the campaign finally ended in September. 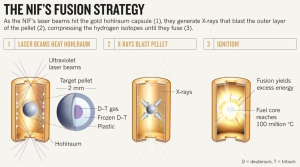 Now federal officials and the US Congress are preparing to set a new direction for the US$3.5-billion facility at the Lawrence Livermore National Laboratory in California. A series of reports commissioned by the government, Congress and the University of California, which administers the lab, are all due later this month. They are expected to outline plans to cut its time for ignition research from 80% to 50% and to give the National Nuclear Security Administration (NNSA), which is responsible for maintaining the US nuclear arsenal, a more central role in determining the NIF’s priorities. The NNSA is planning to emphasize experiments that mimic conditions inside nuclear weapons, generating data to validate the computer codes used to check that the nation’s warheads remain viable — essential work, given the voluntary moratorium on underground testing that began in 1992.

Nobody has given up on ignition, declares Donald Cook, deputy administrator for defence programmes at the NNSA. But a new programme for generating net energy will take a slower, more methodical approach. “We’re now going to get right into the science of what issues are preventing ignition and work through them,” he says. “But we believe that’s going to take a fair amount of work.”

Significant progress has already been made towards ignition, according to physicist Robert Byer at Stanford University in California, who is leading the University of California’s review of the NIF. “The laser itself has been quite remarkable,” he says. One shot can deliver 1.85 megajoules of energy, roughly what the lab originally promised. The instruments used to study the pellet are also performing well, he says.

Yet on the basis of data obtained from the imploding pellets, researchers think that they are still far from reaching the conditions necessary for ignition. One problem seems to be that too much of the laser light is scattering back out of the capsule. Another is that the pellet is being squeezed asymmetrically, which lowers the pressure at its centre. The asymmetry also causes the isotopes to mix unevenly, lowering the temperature in the pellet. “Nature pushes back: that’s my shorthand version of what’s going on,” Byer says.

Nature isn’t the only one pushing back — the NIF’s funders in Congress also want answers. “We’re disappointed,” says one congressional staff member, who spoke to Nature only on condition on anonymity. Critics say that the lab’s enthusiastic promotion of the idea that laser fusion could generate electrical power led many in Congress to believe that they were funding an energy project, when in fact laser fusion is decades from producing electricity. “The lab overemphasized and oversold the energy aspect of the NIF, at the expense of the very important and successful work it was doing in stockpile stewardship and basic science,” says a senior scientist familiar with the NIF programme.

The NIF’s current director Ed Moses bridles at accusations that ignition was over­emphasized. “I don’t think it was oversold or undersold. It just was.” Moses insists that “remarkable progress” has been made in the past 16 months, since the NIF began working with hydrogen-pellet targets. “The goal was to do the initial exploration of the ignition conditions and see where we were, which is what we’ve done.”

But there is likely to be less time for ignition experiments in the coming year, says Cook. Livermore will still control the programme’s day-to-day operation, but the NNSA’s headquarters in Washington DC will set priorities as the facility expands its stockpile stewardship work. Already, the NIF has been able to address crucial questions about how energy passes from the fission stage of a nuclear weapon to its much more powerful fusion stage. Future research will assess the ‘boost phase’ of the weapon — during which a small quantity of deuterium and tritium at the centre of the first stage is used to boost the initial fission phase of the explosion.

The shift in priorities worries Riccardo Betti, a laser fusion researcher at the University of Rochester in New York. “They have to make sure that the ignition effort doesn’t become subcritical,” he warns.

Keeping momentum in the ignition campaign may be crucial, because many in Congress still believe in the energy-research mission being pushed by the lab. Lawmakers have mandated that a new plan for reaching ignition be delivered to them by the end of the month. Politicians are ready to accept that it may take longer than originally stated, but they need to see evidence that it is on course, the congressional staff member says: “It can’t just be an open-ended: ‘Just give us money, we promise we will do good science’.” And if the NIF fails to reach its ignition goal in a few more years? “Then we’ll have to evaluate whether it’s worth continuing to fund the facility.”