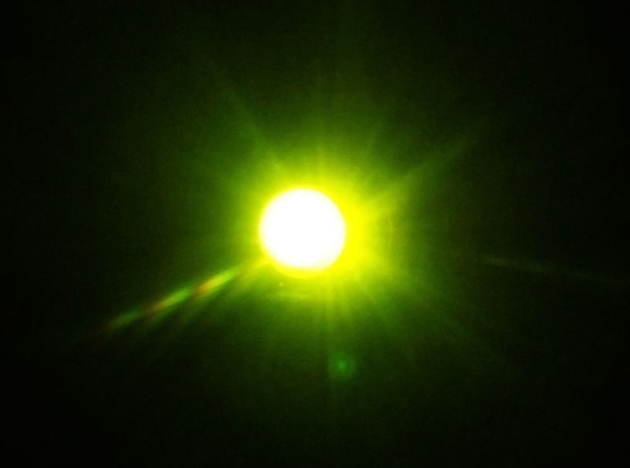 Laser light can make a powdery material shine by so-called Raman scattering, essentially turning it into another laser.

Lasers can be used to identify chemical powders such as explosives or fertilizers from hundreds of metres away, a team of researchers reports in Proceedings of the National Academy of Sciences1.

The authors exploited a technique called Raman spectroscopy, in which a laser sets molecules in a substance vibrating, twisting and wagging. The molecules then re-emit, or scatter, photons of slightly lower energies than the incoming ones. The difference in the energy is determined by the properties of the molecules, and thus the scattered photons carry a unique fingerprint of the substance.

But Raman spectroscopy suffers from a major drawback — the scattered signal is weak, meaning that light is ordinarily difficult to collect even tens of metres away from a sample. So most experts did not think that it would be feasible over longer distances, says Vladislav Yakovlev, a physicist at Texas A&M University in College Station. “All the conventional ways of trying to do this remote chemical sensing basically failed at distances beyond 50 metres or so,” he says.

To boost the signal, Yakovlev's team turned the sample itself into a laser. Whereas a normal laser traps light with mirrors that reflect the beam, a fine powder can trap light within its dancing particles, which then scatter the photons. At a critical threshold of the incoming light's intensity, the signal is exponentially amplified, and the laser light imprinted with the chemical’s signature emerges from the sample in all directions.

The phenomenon is called random lasing, and the researchers report that they used it to identify a variety of chemicals that have been found in improvised explosive devices (including ammonium nitrate, sodium nitrate, and potassium chorlate) in lab tests in which the laser beams travelled nearly 400 metres, reflected by a series of mirrors. They calculate that if they could eliminate the mirrors — which absorb some of the light — they could achieve a straight-line detection distance of 1 kilometre.

One major limitation is that the technique requires materials to be in powder form. Still, the research offers potential military and security applications, including identifying explosives and roadside bombs, says Ali Passian, a physicist at Oak Ridge National Laboratory in Tennessee, who was not involved with the study. After the terrorist attacks of 11 September 2001, he says, “we’ve been bombarded by calls from different defence agencies to do exactly this”.

Passian cautions that success in the laboratory does not always translate to the field. Dust, wind and rising warm air could weaken and distort the laser beams — both to and from the sample. Furthermore, it is not clear how much powder must be present for the detection to work, or in what concentration. If a hazardous powder is mixed into soil, it will be much more difficult to detect, says Passian.

The latest work was supported in part by the US Air Force and conducted at its research facilities in San Antonio, Texas. The study’s authors declined to discuss whether the Air Force has plans to develop the findings, but they suggest other possible uses, such as monitoring farmland and measuring the presence of fertilizing nitrates in soil. Identifying human remains — such as in mass graves — is another area of interest, says Yakovlev, albeit one that the team has not yet considered.