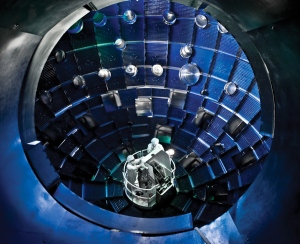 Lasers are used to crush pellets of hydrogen to the point of fusion inside a target chamber at NIF.

Following the failure of an ambitious six-year campaign to demonstrate fusion in the lab, the US government is plotting a more methodical path for harnessing the world's most powerful laser.

The government's new plan, revealed to Nature, calls for a slower, more deliberate approach to achieving ignition: the point at which more energy is produced by a fusion reaction than is consumed. Many physicists believe that this would be an important proof of concept for controlled fusion.

The plan sets a new course for the laser at the National Ignition Facility at the Lawrence Livermore National Laboratory in California. It also promotes the exploration of several alternative ways to reach ignition, including one not involving the laser. And it is more tentative than the previous strategy: it sets a three-year deadline for finding out whether ignition is possible at all, whereas the last one aimed to demonstrate actual fusion.

But even with its scaled back ambitions, critics question whether the campaign will deliver. "It's not a path forward to achieving ignition, it's a path forward to continued funding," says Christopher Paine, director of the nuclear programme at the US Natural Resources Defense Council in Washington DC and a long-time opponent of the NIF.

The US$3.5-billion NIF uses lasers to crush a 2-millimetre pellet of hydrogen fuel to the point of fusion. Rather than irradiating the fuel directly, the lasers shine into a cylindrical capsule. The capsule walls then emit X-rays that squeeze the fuel pellet until it explodes (see diagram).

This indirect approach mimics the ignition system in a thermonuclear weapon, which uses radiation from a fission 'primary' stage to squeeze hydrogen isotopes in the fusion 'secondary' — creating a powerful explosion. 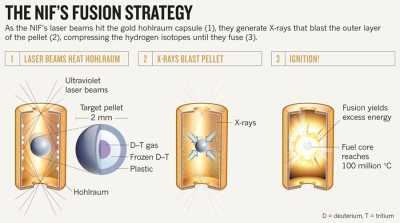 The NIF's main mission is to gather laboratory data on the process to help weapons scientists to care for the ageing US nuclear stockpile. The United States has adhered to a voluntary moratorium on testing nuclear weapons since 1992, so nuclear scientists must use computer simulations to check that the weapons still work, and NIF data feed into these models (see 'Laser lab shifts focus to warheads').

Physicists at the NIF also hope that the process might pave the way for producing electrical power through thermonuclear fusion.

The latest plan was drafted by the US National Nuclear Security Administration (NNSA), which oversees the lab, in response to a congressional request for a strategy for achieving ignition.

Over the next three years, researchers will conduct reduced-power tests to refine their computer simulations and understand why ignition has been so elusive. They will also look at possible improvements to the capsule design.

Other promising approaches to be studied include using lasers to ignite the hydrogen fuel inside the pellet directly, and using a machine called the Z-pinch to squeeze the fuel inside a magnetic field.

By October 2015, the NNSA hopes, it will be able to say whether ignition can be achieved using the NIF or the Z-pinch. Failure, it warns, could have serious implications for the nuclear-weapons programme.

The more sedate approach follows "common sense", says Ricardo Betti, a physicist at the University of Rochester in New York. But he worries that the plan does not give enough time to ignition experiments, focusing instead on other nuclear-weapons experiments and fundamental science. Devoting less time to ignition reduces the probability of success, he warns.

Paine remains sceptical. There are formidable barriers to achieving ignition, and even if the facility did succeed, he says, the results might not be significant. US nuclear weapons are already reliable, he says, and the NIF will never be a source of electrical power.

"What this programme has been from the beginning is part of the nuclear-weapons pork barrel," says Paine. "It should stop."