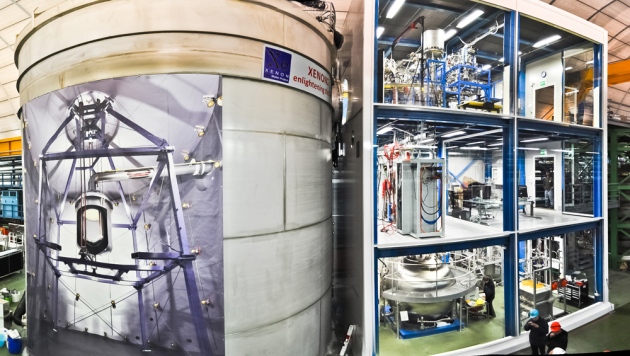 Underground XENON1T experiment should be super-sensitive to dark matter.

The world's most sensitive detector for dark matter — the mysterious stuff thought to make up 85% of matter in the Universe — was inaugurated on 11 November under the Gran Sasso mountain in central Italy.

If the experiment, called XENON1T, finds dark matter, it will enter the history books. Meanwhile a failure to do so, say many theorists, would go a long way to ruling out a popular candidate for the elusive substance — a type of weakly interacting massive particle (WIMP) predicted by supersymmetry, an elegant extension to the standard model of particle physics.

Supersymmetric WIMPs are also being hunted at the Large Hadron Collider (LHC) at CERN, Europe's particle-physics laboratory near Geneva, Switzerland; XENON1T, located at the Gran Sasso National Laboratory run by Italy's National Institute for Nuclear Physics (INFN), is expected to start collecting data by the end of March 2016.

Dark matter neither emits nor absorbs light, but a gravitational influence on stars and galaxies provides strong indirect evidence for its existence. To look for it directly, scientists attempt to measure the tiny amount of energy given off when particles in the ‘halo’ of dark matter — thought to envelop the Milky Way — interact with atoms of ordinary matter on Earth. But this interaction is extremely weak, and more than two decades of searching has yet to turn up convincing evidence for it (see 'Take the dark-matter tour').

In their bid to make the discovery, the 125 scientists on the XENON collaboration will monitor 3.5 tonnes of liquid xenon — an order of magnitude more than is contained in the world's current leading dark-matter detector, the 370-kilogram Large Underground Xenon experiment (LUX) in the Homestake mine in Lead, South Dakota.

There is some disagreement as to exactly when XENON1T's sensitivity will surpass that of LUX's. Elena Aprile, a physicist at Columbia University in New York City and a spokesperson for XENON1T says that will happen after just a week of operation; LUX co-spokesperson Richard Gaitskell of Brown University in Providence, Rhode Island, by contrast, puts the figure at more like two months.

Either way, within a few weeks of switching on, the new detector could in principle detect dark matter at any moment. The longer it goes without doing so, however, the lower the limits it will impose on the strength of WIMP interaction with normal matter.

LUX has already ruled out tentative signals of low-mass WIMPs detected by several other experiments. Two of these — CRESST, also at Gran Sasso, and CoGeNT, based in the Soudan mine in Minnesota — have since confirmed that their signals were caused by background processes1; Xenon1T's superior sensitivity will enable scientists to rule out much of the remaining range of interaction strengths that supersymmetric WIMPs could have.

Jonathan Davis, a particle theorist at King's College London, is excited that XENON1T will act as an independent test for any supersymmetric WIMPs detected by the LHC. If both experiments come up empty-handed, however, “it will be increasingly hard to find experimentalists interested in continuing looking for supersymmetric WIMPs”, says physicist Juan Collar of the University of Chicago in Illinois, who works on CoGeNT.

It will also be bad news for supersymmetry more generally, adds Collar: “A negative result combined with the same from the LHC could mean a near-death blow to these theories."

Dan Hooper, a particle theorist at Fermilab in Batavia, Illinois, is less emphatic. He believes that about ten years' worth of data from XENON1T and a number of planned, even more sensitive experiments will be needed to rule out supersymmetric WIMPs, or confirm the existence of dark matter. 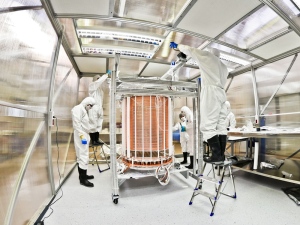 The XENON1T detector takes shape in a clean room.

One thing physicists agree that XENON1T will not be able to do, however, is rule out an ongoing claim to have discovered dark matter by the DAMA collaboration at Gran Sasso, which dates back 17 years. The team maintains that a seasonal variation of signals observed in its sodium-iodide detector can be explained only by the slight change in Earth's speed relative to the dark-matter halo as the planet orbits the Sun2.

Although other physicists doubt that the DAMA detector has really seen dark matter, Davis points out that theorists have put forth models suggesting that dark-matter particles would interact more strongly with sodium iodide than they would with xenon. As such, he says, only another detector that uses sodium iodide could truly resolve the DAMA mystery.

A collaboration called COSINE is planning to do just that, using two sodium-iodide detectors, one in South Korea and one in Spain, according to collaboration member Walter Pettus of Yale University in New Haven, Connecticut.  The hope is that COSINE will have collected enough data by the summer of 2018 to rule out the DAMA claim, or to observe the same characteristic annual cycle. If the latter occurs, COSINE will repeat the exercise in the Southern Hemisphere where the seasons are reversed: if the signal really is dark matter, then the annual modulation should not change, says Pettus.

This story was updated to include the Gran Sasso National Laboratory, where XENON1T is located, and Italy’s National Institute for Nuclear Physics (INFN), which runs the laboratory.