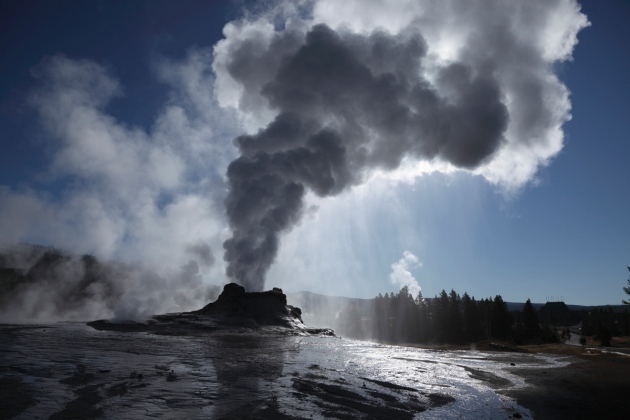 The Castle Geyser at Yellowstone National Park is a dramatic manifestation of a giant magma reservoir — which turns out to be two and a half times larger than previously thought.

The reservoir of molten rock underneath Yellowstone National Park in the United States is at least two and a half times larger than previously thought. Despite this, the scientists who came up with this latest estimate say that the highest risk in the iconic park is not a volcanic eruption but a huge earthquake.

Yellowstone is famous for having a ‘hot spot’ of molten rock that rises from deep within the planet, fuelling the park’s geysers and hot springs1. Most of the magma resides in a partially molten blob a few kilometres beneath Earth’s surface.

New pictures of this plumbing system show that the reservoir is about 80 kilometres long and 20 kilometres wide, says Robert Smith, a geophysicist at the University of Utah in Salt Lake City. “I don’t know of any other magma body that’s been imaged that’s that big,” he says.

Smith reported the finding on 27 October at the annual meeting of the Geological Society of America in Denver, Colorado.

Yellowstone lies in the western United States, where the mountain states of Wyoming, Montana and Idaho converge. The heart of the park is a caldera — a giant collapsed pit left behind by the last of three huge volcanic eruptions in the past 2.1 million years.

Jamie Farrell, a postdoctoral researcher at the University of Utah, mapped the underlying magma reservoir by analysing data from more than 4,500 earthquakes. Seismic waves travel more slowly through molten rock than through solid rock, and seismometers can detect those changes.

The images show that the reservoir resembles a 4,000-cubic-kilometre underground sponge, with 6–8% of it filled with molten rock. It underlies most of the Yellowstone caldera and extends a little beyond it to the northeast.

Above the buried blob — in the topmost 5–10 kilometres of the crust — the rocks are cooler and more brittle, and fracture easily in earthquakes. Yellowstone is known for its swarms of earthquakes — in recent years, the Utah team has discovered tiny quakes that repeat as often as every few seconds2. Volcanic fluids build up in the crust and the small earthquakes probably act as relief valves to release the pressure. “It’s a living, breathing, shaking and baking place,” says Smith.

Yellowstone’s last mammoth volcanic eruption took place 640,000 years ago. Since then, some 50 to 60 smaller eruptions have occurred, with the most recent of these about 70,000 years ago. A much more likely risk than volcanoes, says Smith, is posed by earthquakes of magnitude 7 or greater like those that have struck the region in modern times. “They are the killer events which we’ve already had,” he says. For instance, the magnitude-7.3 Hebgen Lake earthquake that hit near Yellowstone in 1959 killed 28 people.

This area of the western United States is being stretched and thinned by geological forces, causing the crust to fracture in large quakes. The risk of more of these quakes occurring remains high, says Smith, making them a much bigger problem than any chance of a mammoth eruption.

The work underscores just how much remains to be learned about some of the world's most iconic volcanoes. A second study at the meeting, led by Aaron Pietruszka of the US Geological Survey in Denver, looked at the famous Kilauea volcano on the Big Island of Hawaii. Analyses of isotopes of lead in Kilauea's magma suggest it erupted from two small magma reservoirs just beneath the summmit. Volcanologists knew these two magma bodies were there, but the new work indicates the shallower one is smaller than scientists had thought.