A mutation that appeared more than half a million years ago may have helped humans learn the complex muscle movements that are critical to speech and language.

The claim stems from the finding that mice genetically engineered to produce the human form of the gene, called FOXP2, learn more quickly than their normal counterparts.

The work was presented by Christiane Schreiweis, a neuroscientist at the Max Planck Institute (MPI) for Evolutionary Anthropology in Leipzig, Germany, at the Society for Neuroscience meeting this week in Washington DC this week. 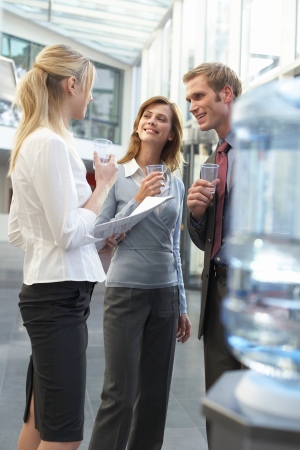 Water-cooler moments may owe their existence partly to a mutation that wires our brain for faster learning.

Scientists discovered FOXP2     in the 1990s by studying a British family known as 'KE' in which three generations suffered from severe speech and language problems1. Those with language problems were found to share an inherited mutation that inactivates one copy of FOXP2.

Most vertebrates have nearly identical versions of the gene, which is involved in the development of brain circuits important for the learning of movement. The human version of FOXP2, the protein encoded by the gene, differs from that of chimpanzees at two amino acids, hinting that changes to the human form may have had a hand in the evolution of language2.

A team led by Schreiweis’ colleague Svante Pääbo discovered that the gene is identical in modern humans (Homo sapiens) and Neanderthals (Homo neanderthalensis), suggesting that the mutation appeared before these two human lineages diverged around 500,000 years ago3.

A few years ago, researchers at the MPI Leipzig engineered mice to make the human FOXP2 protein4. The ‘humanized’ mice were less intrepid explorers and, when separated from their mothers, pups produced altered ultrasonic squeaks compared to pups with the mouse version of FOXP2.

Their brains, compared with those of normal mice, contained neurons with more and longer dendrites — the tendrils that help neurons communicate with each other. Another difference was that cells in a brain region called the basal ganglia were quicker to become unresponsive after repeated electrical stimulation, a trait called ‘long-term depression’ that is implicated in learning and memory.

At the neuroscience meeting, Schreiweis reported that mice with the human form of FOXP2 learn more quickly than ordinary mice. She challenged mice to solve a maze that involved turning either left or right to find a water reward. A visual clue, such as a star, along with the texture of the maze's surface, showed the correct direction to turn.

After eight days of practice, mice with the human form of FOXP2 learnt to follow the clues to the water 70% of the time. Normal mice took an additional four days to reach this level. Schreiweis says that the human form of the gene allowed mice to more quickly integrate the visual and tactile clues when learning to solve the maze.

In humans, she says, the mutation to FOXP2 might have helped our species learn the complex muscle movements needed to form basic sounds and then combine these sounds into words and sentences.

Another MPI team member, Ulrich Bornschein, presented work at the neuroscience meeting showing that the changes to brain circuitry that lead to quicker learning come about with just one of the two amino-acid changes in the human form of FOXP2. The second mutation may do nothing.

“That makes sense,” says Genevieve Konopka, a neuroscientist at the University of Texas Southwestern Medical Center in Dallas, who also studies FOXP2. Carnivores, including dogs and wolves, independently evolved the other human FOXP2 mutation, with no obvious effect on their brains.

Faraneh Vargha-Khadem, a neuroscientist at University College London who has studied the KE family in which FOXP2 is mutated, thinks that the new findings could help explain the gene's role in perfecting the facial movements involved in speech.

But she does not see how changes in basic learning circuitry could explain how FOXP2 helps humans to automatically and effortlessly translate their thoughts into spoken language. “You are not deciding how you are going to move your muscles to form these sounds,” she says.