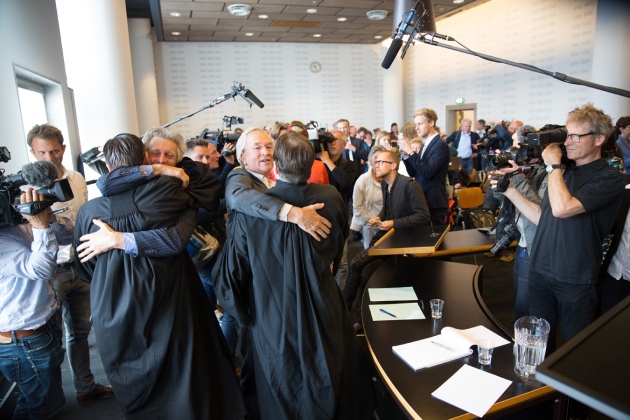 Celebrations in The Hague after a Dutch court ordered the government to do more to cut greenhouse-gas emissions.

In a precedent-setting judgment, a Dutch court has ruled that the Netherlands must step up its efforts to reduce domestic greenhouse-gas emissions. Citing science as the basis of its verdict, a District Court in The Hague said that the state must take measures to reduce greenhouse-gas emissions by at least 25% by 2020, relative to 1990 levels, in order to prevent possibly dangerous climate change.

The Dutch government can appeal the ruling — although it has not yet said whether it will do so. Nor is it clear what happens if the government fails to take action. But legal experts say that it is the first time that a judge has required a state to take precautions to mitigate the effects of climate change.

“This is a landmark ruling,” says James Thornton, the London-based chief executive of Client Earth, an international group of environmental lawyers. “Most remarkably, it is based in essence on established science and the ancient principle of a government’s duty of care. That reasoning is applicable in any legal system and will certainly be used by courts in other countries.” A similar lawsuit has been filed in Belgium, he says.

Two packed courtrooms hosted journalists and worried citizens, who greeted the 24 June verdict with cheers and applause. “We are overjoyed by the result,” says Marjan Minnesma, director of the Urgenda Foundation, a Dutch citizens' climate-change platform that filed the landmark lawsuit in 2013 on behalf of nearly 900 plaintiffs, including children. The foundation specifically sued the government for violating human rights by failing to take adequate action to prevent the harmful impacts of climate change.

“States are meant to protect their citizens,” she says. “If politicians will not do this of their own accord, then the courts are there to help.”

The Intergovernmental Panel on Climate Change (IPCC) says that aggregated greenhouse-gas emissions by developed countries must drop by 25–40% by 2020 (compared to 1990 levels), to give the world a reasonable chance of staying below 2 °C warming — the IPCC's threshold for "dangerous" climate change. But the Netherlands, which is among the largest per-capita emitters worldwide, has failed to cut its carbon dioxide emissions to below 1990 levels; emissions peaked around 2010 and have decreased by scarcely 10% since. The District Court noted that on the basis of current policies, the country will, at most, achieve reductions of 17% below 1990 levels by 2020.

Even so, the Netherlands is well on target to meeting the obligations placed upon it by the European Union (EU), points out Robert Koelemeijer, a climate-policy expert at the PBL Netherlands Environmental Assessment Agency in Bilthoven.

Overall, the EU has a target to cut the bloc's greenhouse emissions by 20% by 2020, compared to 1990 emissions (a goal which it is well on track to achieve). Some of those cuts come from the EU-wide emissions trading system, which sets limits on industrial greenhouse-gas emissions across the region by allotting emissions permits among power stations and industrial plants, and in which Dutch companies participate.

Separately, the EU has given member states legal obligations to reduce emissions in other sectors (such as transport, heating and agriculture). The Netherlands is also on target to meet that second goal — a 16% reduction by 2020 relative to 2005 levels — and so the Dutch government’s room for manoeuvre to reduce emissions further is very small, Koelemeijer says.

“Climate and emission reduction policies are set to a large extent by the EU,” he says. “It would be very hard to oblige Dutch companies participating in the EU emissions trading system to do more than what they are already doing.”