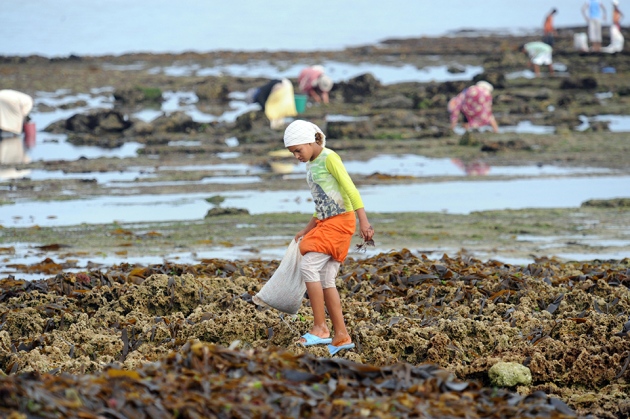 Restrictions on harvests and exports of Gelidium seaweed in Morocco have affected the global supply of the lab reagent agar.

Microbiology’s most important reagent is in short supply, with potential consequences for research, public health and clinical labs around the world.

Agar — the seaweed-derived, gelatinous substance that biologists use to culture microbes — is experiencing a global downturn, marine biologists, agar producers and industry analysts told Nature. “There’s not enough seaweed for everyone, so basically we are now reducing our production,” says Pedro Sanchez, deputy managing director of Industrias Roko in Polígono de Silvota, Spain, which processes seaweed to make some 40% of the world’s agar.

The shortage can be traced to newly enforced trade restrictions on the seaweed, arising from environmental concerns that the algae are being overharvested. It is unclear how deeply the dearth will hit researchers, but it has already pushed wholesale prices of agar to an all-time high of around US$35–45 per kilogram — nearly triple the price before scarcities began. Individual researchers, who buy packaged agar from lab-supply companies, can pay many times this amount.

One major supplier, Thermo Fisher Scientific of Waltham, Massachusetts, says that it has stopped selling two ‘raw’ agar products —  agar that has not been mixed with other ingredients — until 2016, so that it can prioritize more-popular products that contain a mixture of agar and growth nutrients. The company reports that about 200 of its customers have been affected. Another major lab-supply company, Millipore Sigma in Billerica, Massachusetts, has also halted sales of raw agar, and it says that it will re-evaluate its supplies early next year.

Millipore Sigma blames the shortage on competition from food companies for purified agar. The global demand from food-makers, at several thousand tonnes annually, dwarfs the 900 tonnes that go to lab-supply companies.

Formed of long chains of sugar molecules, agar is prized by microbiologists for its ability to form hard gels when mixed with water and growth nutrients. When a solution of bacteria is spread onto an agar-lined plate, individual cells grow into distinct colonies, allowing researchers to isolate each different strain in the mixture.

Adam Roberts, a microbiologist at University College London, drew attention to the agar-supply problem last month, when he tweeted a letter from Thermo Fisher announcing its suspension of some agar sales. His lab depends on the product to identify new antimicrobial compounds in soil bacteria.

“It’s not cultivated, and it’s not possible to cultivate. We’ve wasted money trying to do it in the past.”

Roberts managed to source raw agar from another supplier, but he says that his lab may have to begin rationing it and prioritizing some experiments over others. “It would be a bloody nightmare,” he says. When a colleague at another institution heard about Roberts’s agar-supply problem, she started to hoard her own stash. “If it gets more serious and hard to come by, I don’t know what we’ll do,” says Roberts.

Since the introduction of agar plates in the 1880s — which enabled researchers to isolate tuberculosis, cholera and other disease-causing bacteria for the first time — bacteriological agar has been derived from a clutch of red seaweed species belonging to the genus Gelidium.

Algae of this type grow atop rocky sea beds, forming vast underwater lawns of bushy, red fronds, and they favour cool, turbulent waters that provide a steady supply of oxygen and other nutrients — a preference that makes industrial-scale farming impossible. “It’s not cultivated, and it’s not possible to cultivate — although we’ve wasted a lot of money trying to do it in the past,” says Sanchez. In some places, Gelidium is harvested by underwater divers or when the tides roll in, but the seaweed is most commonly collected when storms wash it ashore.

The geographical sources of Gelidium have shifted over the decades. Before the Second World War, Japan was king; Portugal was also once a leading supplier. Now, most of the world’s agar derives from Gelidium grown in Morocco, with Spain in second place and Portugal, France, Mexico, Chile, South Africa, Japan and South Korea all contributing smaller quantities (see ‘Seaweed shortage’). 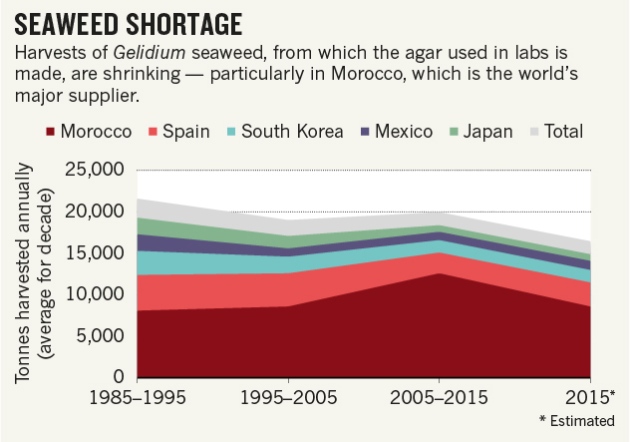 Current agar deficiencies are due mostly to an unsteady supply of Moroccan Gelidium, say industry insiders. Throughout the 2000s, the nation regularly harvested as much as 14,000 tonnes per year, which was sold on to foreign and domestic agar producers. But citing concerns over dwindling Gelidium populations, the Moroccan government cut the legal annual harvest to around 6,000 tonnes, and has limited foreign exports of the algae to around 1,200 tonnes. Although the changes were imposed in 2010, the country only began to enforce these trade limits last year, says Sanchez.

There is evidence, says marine ecologist Ricardo Melo at the University of Lisbon, that Moroccan Gelidium stocks were being overharvested by throngs of beach-combers in search of ‘red gold’, as the seaweed is known. But Melo says that the trade restrictions make little sense from a conservation point of view.

The domestic Moroccan market is now flooded with Gelidium, while the rest of the world struggles with a massive shortage. This has benefited Morocco’s lone agar producer, which can now buy the seaweed at rock-bottom prices, but the move has vastly increased the cost for producers elsewhere.

And that means that companies such as Thermo Fisher and Millipore Sigma, which buy purified agar from producers and sell it on to researchers as packaged products, have little choice but to pay the skyrocketing prices that agar now commands, says Dennis Seisun, who runs an industry-analysis firm called IMR International in San Diego, California. “The ones that had contracts with the suppliers are getting preferential treatment, but I’m pretty sure they’re not getting all they want.”

The European Commission has complained to the Moroccan government that the country’s export restrictions violate its free-trade agreements with European Union countries, but to little avail. And prospects for new sources of Gelidium are bleak. Unexploited populations of the seaweed exist off the shores of North Korea, but “it’s not easy to work in a country like North Korea”, says Sanchez.

Agar substitutes, such as a seaweed product called carrageenan, have proved unsuitable for culturing microbes. Before a technician introduced agar to his lab, pioneering German microbiologist Robert Koch isolated bacteria on potato slices. “Unless we go back to what Koch used to do — use a potato,” Roberts says, “there’s no real alternative.”