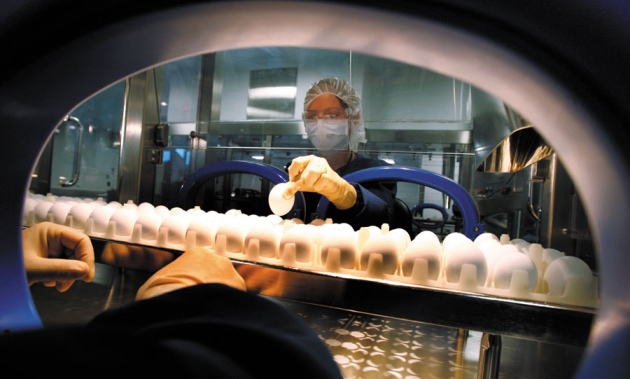 To make flu vaccines, the virus is grown in hens' eggs — a slow, complex process adequate for seasonal vaccines but ill-suited to responding to a pandemic.

Now that laboratory studies have yielded a glimpse of H5N1 flu viruses that might spread rapidly in humans and cause a devastating pandemic, vaccine makers will be better prepared if one develops. Or will they?

It is an appealing argument, and one that some scientists have made in recent weeks as controversy has swirled over two experiments that created H5N1 strains able to spread in mammals. But most experts contacted by Nature say that the work is unlikely to speed up the vaccine response in a pandemic. Jeremy Farrar, director of the Oxford University Clinical Research Unit in Ho Chi Minh City, Vietnam, calls such expectations “a red herring”.

Farrar and others say that the studies, from teams led by Ron Fouchier at the Erasmus Medical Center in Rotterdam, the Netherlands, and Yoshihiro Kawaoka at the University of Wisconsin-Madison, could benefit flu surveillance in the long term. The detection in naturally circulating viruses of genetic changes similar to those of the lab strains might provide an early warning of a pandemic — although researchers stress that current surveillance systems are nowhere near up to that job, and that a pandemic might be heralded by a completely different set of mutations (see Nature 481, 417–418; 2012). But many agree with Richard Webby, a flu virologist at the St. Jude Children's Research Hospital in Memphis, Tennessee, who says, “I think the research is important, but not for vaccine purposes.”

Producing vaccine faster, and in larger amounts, when a pandemic breaks out is a key public-health goal (see 'Jab lag'). In 2009, a vaccine only became available months after the H1N1 pandemic began — and even then there was enough for only about 20% of the world's population. Fouchier and Kawaoka have both argued that their research could improve pandemic preparedness. Should a wild H5N1 virus be detected with combinations of mutations similar to those of the lab viruses, they say, manufacturers could ramp up production of the 'pre-pandemic' vaccines that have been produced in small quantities against current H5N1 viruses.

In a Comment piece in Nature this week (see page 155), Kawaoka notes that existing H5N1 vaccines are effective against his lab-created strain, suggesting that these might provide some cross-protection against any natural human pandemic strain resembling it. Anthony Fauci, director of the US National Institute of Allergy and Infectious Diseases in Bethesda, Maryland, adds that seeing the lab mutations accumulating in field isolates of H5N1 could “get us to be a little more attentive to revving up the capability of expanding the doses of vaccine we have”.

But others say that such mutants are unlikely to be spotted in time. Moreover, they say, governments are unlikely to take the political or economic risks of plunging ahead with a vaccine on the basis of a putative pandemic threat. “Nobody is going to ramp up production of a pre-pandemic vaccine based on these two experimental viruses,” says Webby. “That's 100% sure.” Ab Osterhaus, a co-author on Fouchier's paper also at Erasmus, agrees that industry will wait on the actual pandemic strain for any major roll-out, but says that screening for mutations could detect variants that could be used to make new seed strains, which might help with the initial response.

Daniel Perez, a virologist at the University of Maryland in College Park, has argued that the lab strains themselves could be added to the current panel of pre-pandemic vaccine strains. But the existing pre-pandemic vaccines are probably just as good. For vaccine purposes, what counts most is the overall antigenic properties of the virus's two surface proteins, haem-agglutinin (HA) and neuraminidase (NA).

“The antigenicity of the virus depends less on any mutations than on where the HA and NA come from,” says Ilaria Capua, an avian-flu researcher at the Veterinary Public Health Institute in Legnaro, Italy. Seed strains representing the major variants of circulating HA and NA are regularly revised for use in pre-pandemic vaccines.

In any case, vaccine makers seem unlikely to take substantial pre-emptive action, regardless of any ominous changes in wild H5N1. Bram Palache, the global government affairs director for vaccines at Abbott Biologicals in Weesp, the Netherlands, says that industry will not switch its limited plant capacity from making the seasonal flu vaccines to making a pandemic vaccine until a human pandemic has actually emerged and government orders are in hand. And once a pandemic is under way, neither industry nor governments will be content to use existing pre-pandemic vaccines — they will insist on one matched to the pandemic strain itself, says Palache.

Given the current technology and infrastructure, developing and manufacturing such a vaccine will take many months. Now that the mutant-flu studies have suggested that an H5N1 pandemic is a real possibility, health authorities should focus on shortening that timescale, says Farrar. He urges much greater investment in better and faster vaccine technologies, including universal flu vaccines — because H5N1 is far from the only possible pandemic strain.