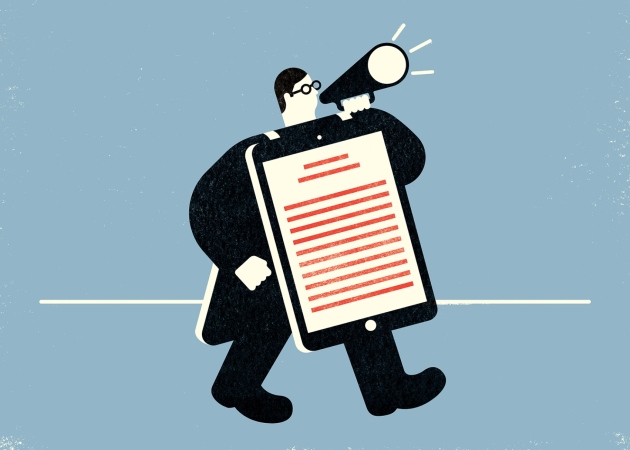 Few people have heard of Michele Tobias's research field — and even fewer study it. Tobias is an environmental scientist at California State Parks in Sacramento, but in her spare time she is a biogeomorphologist — someone who investigates the effects of organisms on landscapes. In her case, she studies how plants shape the development of sand dunes on the California coast. “I'm pretty much, as far as I know, the only person who has been studying this phenomenon,” she says.

But Tobias thinks those who make decisions about California's coastal management should care about her work. She has become adept at pushing her message on social media to draw as many eyes to her papers as possible. “Being someone who's fairly young in the field of scientific publication, I need to spread out and find an audience. I can't just publish something and expect it to go somewhere,” she says.

It's not the job of researchers to become experts in public relations — that's why universities have press offices, says Matt Shipman, research communications lead at North Carolina State University in Raleigh. But he recommends scientists toot their own horns as well. Increasingly, researchers across the scientific spectrum are coming to the same conclusion. That demand has led to the emergence of an online tool for managing the practice: a free site called Kudos, which aims to help researchers maximize the reach and impact of their papers on social media, and measure the effects of their efforts.

Tobias is a fan, and so are many others. Since its launch in May 2014, the website's user base has grown to more than 100,000 users with around 4,000 sign-ups each month, says co-founder Charlie Rapple, who — like most of Kudos's staff — is based in Oxford, UK.

“With so much more research being undertaken and published, the current system of dissemination can no longer guarantee that your work will find its audience,” says Rapple. Kudos, she says, aims “to make research more discoverable” and to “help researchers get more credit for what they do and achieve more with their work”. Kudos gives each research paper its own profile page, which users can flesh out with a plain-language summary, external resources, reviews, presentations and more. Tobias says that more than 830 individuals have viewed a summary of one of her papers on the site. She also linked one of her studies to a YouTube video in which members of her contemporary dance company represented the role of plants in sand dune formation through improvisational dance. “It's kind of an interesting experiment, but it's related to the paper so I linked it in the resources section.”

Another Kudos user, Antony Williams of the National Center for Computational Toxicology in Research Triangle Park, North Carolina, likes that the site provides a forum for linking to post-publication commentary and related articles — which he calls “forward citation”. Users also create their own overall profile page, which can automatically pull in data from research-profiling services such as ORCID.

This material isn't only visible on Kudos's site: it can also appear in a small box next to a paper on external sites thanks to 'widgets' that Kudos provides to third parties such as research publishers. The International Union of Crystallography, for instance, displays Kudos profiles next to papers in the structural-biology journal Acta Crystallographica Section D.

To help researchers promote their work to others, Kudos also provides its users with trackable URLs, which they can send out by e-mail, Twitter, Facebook or other social-media platforms. Kudos tallies the resulting clicks — allowing researchers, as well as institutional press offices and funding agencies, to look at which outlets produce the best return on investment, says Rapple. The site also aggregates data from Altmetric.com, which finds mentions of papers on mainstream and social media, as well as citation figures from Thomson Reuters and article-download counts from publishers.

Some of the services Kudos provides are available elsewhere, notes Greg Tananbaum, who owns the California-based ScholarNext consultancy and focuses on scholarly communication and academic technology issues. But integrating them into one site is unique, he says. In particular, Kudos makes it easier for mid-to-late-career academics, who often are wary of social media, to engage on those platforms and measure the impact of that activity. “Creating a mechanism that makes it easier to onboard them into that world, is novel,” he says.

The site is free for academics because scholarly institutions, societies, publishers and other commercial clients pay for its upkeep. Kudos helps these customers to track and evaluate their researchers (or, in the case of publishers, their authors) and foster a stronger relationship with them, explains Rapple. By encouraging researchers to do outreach, the site also indirectly builds the profile of their institution or their journal, she adds. And Rapple hopes that publishers and institutions can build up valuable intelligence from the Kudos database about the effects of different kinds of outreach. The site has established partnerships with some 65 publishers so far, including well-known firms such as Wiley and Taylor & Francis.

Kudos's support for displaying plain-language summaries, which researchers can write to make their articles accessible to a wider audience, is particularly useful, Tananbaum says. The family members of someone with cancer, for example, may be better able to understand the context and significance of a medical study from a simple description than from the published abstract, he says. Tobias, similarly, says she hopes that the summary she has written for one of her papers will bring it to the attention of policymakers and resource managers.

But even researchers within one's immediate field can benefit from such summaries, says Matthew Bowler, a scientist at the European Molecular Biology Laboratory in Grenoble, France, and a Kudos user. The plain language makes it easier for them to understand a study's context and significance, and to find research papers through general keyword searches.

That said, it takes time and dedication to make such resources pay off, Shipman says. It isn't easy to translate research findings into something accessible to other disciplines, let alone to the general public. “Having access to a platform like Kudos is great in that it gives a place for your research story to live. But it does not make you a better story teller, and it does not help you reach and find an audience for that story,” he says. A poorly worded plain-language summary would be little better than the article abstract.

Some research journals already provide plain-language summaries for non-specialist readers, but these are often written by editors, not the authors themselves. Nature is one, and in June it started a trial of author-written summaries (although they are still edited by journal staff before publication). Over June and July, the journal released 500-word summaries of 12 previously published articles, says Nature editorial director Ritu Dhand. Meanwhile, eLife, which hires writers to produce plain-language summaries, as well as writing some in-house, posts around 10% of its 'digests' on the popular blogging platform Medium to broaden the journal's audience, says Stuart King, associate features editor at eLife.

Each researcher must make a personal choice about how much time to spend promoting their work on social media. But judicious use of self-promotion, says Shipman, leads to visibility, which in turn can lead to increased citations and attract talented graduate students and postdocs to the lab. Yet scientists cannot simply flit in and out of the social-media landscape and hope to make a significant impact, Shipman adds. “Like any other relationship, it takes time and effort to build and sustain an online network.”

For researchers who might feel daunted by the breadth of the social-media landscape, Williams, who has given seminars in the United States and internationally on social media for scientists, offers simple advice: choose two or three social-media platforms, invest the time to get them set up, and then spend perhaps two hours a month keeping them current. If nothing else, he says, build a LinkedIn profile as an online CV, claim and update an ORCID ID, and log peer-review activities on Publons.com.

That said, a research paper is itself the end product of an extraordinary investment of time and energy. It takes thousands of hours of research, data analysis, writing and peer review, he says. “Shouldn't you put at least 10 to 20 hours of work into making sure that you can get the message out to relevant people?”

This article should have made clear that Altmetric.com collects data from both mainstream and social media. The text has been updated to reflect this.