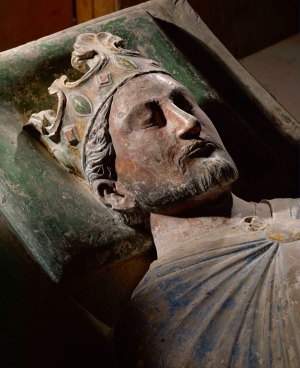 They called him Lionheart — a name that has become the epitome of courage in battle. More than eight centuries after the death of King Richard I of England, forensic scientists have now revealed the secrets of his most feted organ.

Richard was a warrior king who fought against the Muslim sultan Saladin during the third Crusade in the twelfth century. But domestic difficulties were waiting when he returned to Europe, and he spent the last years of his life trying to suppress revolt in his French territories.

On 25 March 1199, while laying siege to the castle of Châlus-Chabrol in the Limousin region, he was pierced in the left shoulder by an enemy crossbow bolt. Richard I died 12 days later, probably from infection in the wound.

His entrails were removed and stored in a coffin in Châlus, and his body was sent to Fontevraud Abbey in Anjou; but his heart was embalmed so that it would be preserved for the 500-kilometre journey to Notre Dame cathedral in Rouen, the base for English forces in Normandy at the time.

During an excavation of the cathedral in 1838, local historian Achille Deville found the remains of the heart inside a lead reliquary roughly the size of a shoebox, now kept at the Museum of Natural History in Rouen. A Latin inscription on the lid proclaims: “Here is the heart of Richard, King of England”.

Deville and others examined the contents of the reliquary, but until now the remains have never been subjected to a rigorous forensic analysis.

Enter Philippe Charlier, a forensic pathologist and anthropologist at the Raymond Poincaré University Hospital in Garches, France. Charlier has previously found that sacred bones thought to belong to Joan of Arc, the fifteenth-century martyr, were in fact taken from an Egyptian mummy. He also identified an anonymous preserved head as that of Henry IV of France, who was assassinated in 1610 and posthumously decapitated during the French Revolution1.

For their analysis of Richard's embalmed heart published today in Scientific Reports2, Charlier and his team took just 2 grams of the heart’s powdered remains and subjected it to a battery of tests. Scanning electron microscopy identified pollen grains from myrtle, mint and other known embalming plants, as well as poplar and bellflower, which were in bloom when the king died.

Elemental analysis turned up high concentrations of calcium, suggesting that lime may have been used as a preservative. Mass spectrometry identified organic molecules characteristic of creosote and frankincense, both used for preserving tissue.

The scientists also found bacteria, although none could be related to Richard’s cause of death. “We were surprised to get so much information,” says Charlier. He believes that this is the first forensic analysis of an embalmed heart ever done and the first physical evidence of ancient embalming using frankincense.

“It proves that embalming of Christians did happen,” says Stephen Buckley, an archaeological chemist at the University of York, UK, who has conducted forensic analyses of Egyptian mummies. “The Church has tried to downplay the use of embalming in religious leaders and royalty” in the past because of the pagan origins of the practice, he adds. But mediaeval texts show that many elite members of society could have expected similar treatment.

Charlier was not allowed access to heart-residue samples large enough for carbon dating or genetic analysis, but he insists that the regal provenance of the samples is not in doubt. For his next project he plans to investigate the body of John of Lancaster, First Duke of Bedford, who ordered the execution of Joan of Arc.