Lythronax is the oldest tyrannosaurid known to science.

Palaeontologists have unearthed a close relative of Tyrannosaurus rex in the red rocks of southern Utah.

The newfound fossil, called Lythronax, which translates as 'king of gore', is a tyrannosaurid — a hulking, two-legged predator that had a large head and small arms similar to T. rex. The fossil dates back 80 million years and is the oldest tyrannosaurid known, scientists report in PLoS ONE1.

The same research group also uncovered the best fossils yet of a second tyrannosaurid, one that lived 76 million years ago and is called Teratophoneus. Together, the creatures help to show how these T. rex relatives evolved and came to dominate western North America for a time. (T. rex itself arrived on the scene around 70 million years ago.)

“They’re both important discoveries that should go a long way in helping us piece together the family tree of tyrannosaurs,” says Stephen Brusatte, a palaeontologist at the University of Edinburgh, UK, who was not involved in the work. 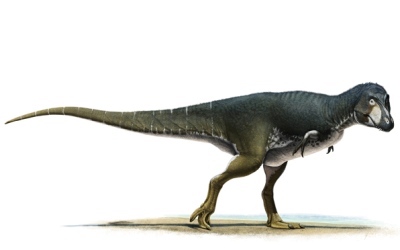 Artist's reconstruction of the 'king of gore'.

A large team led by researchers at the Natural History Museum of Utah in Salt Lake City found Lythronax in 2009 in the Grand Staircase-Escalante National Monument near Kanab. These rocks have yielded a bonanza of dinosaur discoveries, including a pair of horned dinosaur species that lived side by side2.

Some 80 million years ago, the region lay on the eastern edge of a long, skinny island that stretched from what is now Alaska to southern North America. Earlier work showed that many animals along this island, called Laramidia, tended to cluster in separate species in the north and in the south, rather than intermixing across latitudes (see 'Triceratops-like dinosaur reveals regional diversity').

“Something’s keeping them from marching up and down from Alberta to Utah,” says Mark Loewen, a palaeontologist at the Utah museum who led the team.

As southern dinosaurs, Lythronax and Teratophoneus show that this clustering pattern holds true for the large meat-eating animals of the time. “It seems to be an ecosystem-wide signal,” says team member Randall Irmis, another palaeontologist at the Utah museum.

Rising sea levels may have cut off certain regions, causing the animals that lived there to evolve in isolation, Irmis suggests.

Brusatte, however, is not so sure. “I’m sceptical of their biogeographical argument because it hinges on how they draw their family tree,” he says. Change one branch on that tree, Brusatte says, and suddenly it is unclear whether rising sea levels dictated how dinosaurs moved around. 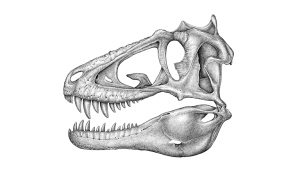 Lythronax's broad skull suggests the dinosaur could see in three dimensions as well as T. rex.

At 8 metres long and weighing in at around 2.5 tonnes, Lythronax was about two-thirds the size of T. rex. But it was almost certainly the top predator of its time, stalking the coastal marshes of Laramidia and scanning for prey. The animal had an unusually wide skull, which set its eyes far enough apart to give it a fair amount of three-dimensional vision, similar to T. rex.

The researchers were surprised to find an evolved, broadened skull in a tyrannosaurid that is many millions of years older than T. rex. “It actually works out backward from what you’d expect,” says Loewen. “You’d expect the most primitive animal to be the oldest.”

Exactly how and when the wider skull arose in these dinosaurs remains a mystery. But Utah may hold the answer in even older rocks, those dating between 90 million and 80 million years ago. Loewen’s team, as well as others, are busy hunting in Grand Staircase-Escalante for fossils from that time.