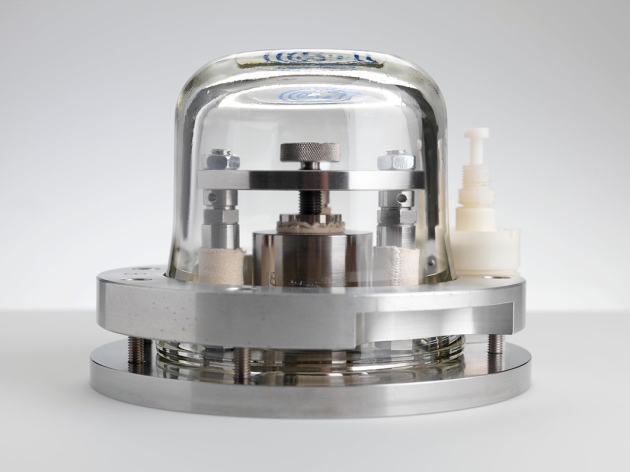 A replica of the kilogram mass reference, which is set to be replaced by a definition based on constants.

For decades, metrologists have strived to retire ‘Le Grand K’ — the platinum and iridium cylinder that for 126 years has defined the kilogram from a high-security vault outside Paris. Now it looks as if they at last have the data needed to replace the cylinder with a definition based on mathematical constants.

The breakthrough comes in time for the kilo­gram to be included in a broader redefinition of units — including the ampere, mole and kelvin — scheduled for 2018. And this week, the International Committee for Weights and Measures (CIPM) will meet in Paris to thrash out the next steps.

“It is an exciting time,” says David Newell, a physicist at the US National Institute of Standards and Technology (NIST) in Gaithersburg, Maryland. “It is the culmination of intense, prolonged efforts worldwide.”

The kilogram is the only SI unit still based on a physical object. Although experiments that could define it in terms of fundamental constants were described in the 1970s, only in the past year have teams using two completely different methods achieved results that are both precise enough, and in sufficient agreement, to topple the physical definition.

Redefinition will not make the kilogram more precise, but it will make it more stable. A physical object can lose or gain atoms over time, or be destroyed, but constants remain the same. And a definition based on constants would, at least in theory, allow the exact kilogram measure to be available to someone anywhere on the planet, rather than just those who can access the safe in France, says Richard Davis, former head of the mass division of the International Bureau of Weights and Measures (BIPM) in Sèvres, France, which hosts the metal kilogram.

In 2011, the CIPM formally agreed to express the kilogram in terms of Planck’s constant, which relates a particle’s energy to its frequency, and, through E = mc2, to its mass. This means first setting the Planck value using experiments based on the current reference kilogram, and then using that value to define the kilogram. The CIPM’s committee on mass recommends that three independent measurements of Planck’s constant agree, and that two of them use different methods.

One method, pioneered by an international team known as the Avogadro Project, involves counting the atoms in two silicon-28 spheres that each weigh the same as the reference kilogram. This allows them to calculate a value for Avogadro’s constant, which the researchers convert into a value for Planck’s constant. Another method uses a device called a watt balance to produce a value for Planck’s constant by weighing a test mass calibrated according to the reference kilogram against an eletromagnetic force.

Reaching agreement proved difficult. In early 2011, some researchers contemplated simply averaging measurements from the two different devices. “I think every metrologist worried, ‘What if they never converge?’” says Davis.

“I think every metrologist worried, ‘What if they never converge?’”

Such a fudge did not prove necessary, thanks to three years of intense work, says Joachim Ullrich, president of the German National Metrology Institute (PTB) in Braunschweig, which coordinates the Avogadro Project, and chair of the CIPM’s Consultative Committee for Units. The first sign of progress came after the Measurement Science and Standards laboratory in Ottawa, part of Canada’s National Research Council (NRC), bought and rebuilt a watt balance originally constructed at the UK National Physical Laboratory in Teddington.

In a new lab, a fresh NRC team factored in some predicted but as yet unaccounted for systematic errors, and the result, published1 in January 2012, inched closer to the Avogadro Project’s silicon-sphere result.

That still left the result from NIST as an outlier, says Newell, chair of the international CODATA committee’s group on fundamental constants, which provides a best value for constants such as Planck’s every four years by taking into account the results of all the experiments done so far. “We brought in a whole new research team, we went over every component, went through every system,” he says. They never found the cause for the disagreement, but in late 2014 the NIST team achieved2 a match with the other two3, 4, who in the meantime had shrunk their relative uncertainties to within the required levels.

In August 2015, when CODATA published its latest value for Planck’s constant, the uncertainty was 12 parts per billion, just over one-quarter of its value in CODATA’s previous report — and within the CIPM’s requirements.

The CIPM will discuss its next moves during its meeting at the BIPM on 15 and 16 October. This will include a discussion of the draft resolution that is expected to redefine the ampere, mole, kelvin and kilogram at the General Conference on Weights and Measures in 2018. The BIPM is still working on a protocol that will allow teams without access to a watt balance or silicon-sphere set-up to use a new kilogram definition.

There is still scope for upset. The teams have until 1 July 2017 to publish further data before the value of Planck’s constant is fixed. Before this deadline, Ullrich’s team plans to use a new batch of spheres from Russia in experiments that he hopes will lead to even more-certain values for Planck’s constant, but could cause the results to diverge again. “Then we would be in trouble,” he says. “But I’m very confident this will not happen.” Newell agrees: “This train has a lot of momentum and there has to be something seriously wrong to derail it.”

If they are proved right, in 2018, Le Grand K will join the metre as a museum piece. “We’ll keep it,” says Davis, “but it won’t be defining anything anymore.”