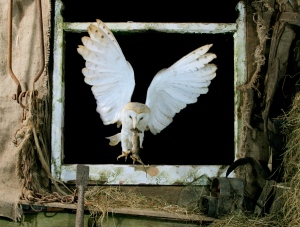 Owls that eat poisoned rats can be poisoned themselves.

Law-makers in Canada and the United States are making moves to restrict the use of rodent poisons based on blood thinners, as studies show that the toxins accumulate in birds of prey and other animals.

The chemicals in question are anticoagulant rodenticides (ARs), which work like the human blood-thinning drug warfarin. Warfarin is itself used as a rat poison, but is what environmental toxicologists call a first-generation AR, less lethal and less prone to bioaccumulation than its second-generation successors.

Ecologists have long known that pesticides such as DDT can build up in, and sometimes kill, animals that prey on target pests, but until recently scientists had not realized the degree to which this can also happen with second-generation ARs. "It seems that every time anybody goes out and gets a bunch of dead birds of prey and looks at their livers, they find surprisingly high incidence of these compounds," says John Elliott, an ecotoxicologist at Environment Canada in Delta.

In a study of  more than 130 dead birds of prey found in and around Vancouver, Canada, "virtually 100%" of the owls and a large proportion of the hawks had residues of at least one second-generation AR in their livers, Elliot announced this week at the 2012 meeting of the North American division of the Society of Environmental Toxicology and Chemistry in Long Beach, California.

"From a regulatory point of view [second-generation ARs] are 'PBT'," he says. "Persistent, bioaccumulative and toxic."

Presumably, these birds of prey are eating poisoned rats. But other birds can also be poisoned if insects eat the rat bait and the birds then eat the insects. Some birds may even eat the bait directly. In a test, Elliott put sparrows in a cage with rat-bait pellets. "They went straight for the bait," he says.

ARs work by interfering with the blood's ability to clot. But there is a huge variation in how susceptible individual birds and animals are to the poisons, says Maureen Murray, a wildlife veterinarian from Tufts Cummings School of Veterinary Medicine in North Grafton, Massachusetts, who has worked with hundreds of injured birds of prey, many suffering from AR poisoning. Similar variation is seen among humans who take blood-thinning drugs such as warfarin. "It is a medication that requires really intensive monitoring," says Murray.

Governments are moving to address the problem. On 1 January, Canada will start restricting most outdoor household use of ARs to the less-toxic first-generation compounds, says Elliott. And in most situations, bait will have to be contained in tamper-resistant bait stations or in other locations not accessible to non-target wildlife.

The US federal Environmental Protection Agency is considering banning second-generation ARs from the consumer market. There is also a move towards increased use of a potent neurotoxin called bromethalin, said Anne Fairbrother, director of ecosciences at Exponent, a science and engineering consultancy in Bellevue, Washington.

However, she thinks that household bans won’t have much effect, because most outdoor use of rodenticides is by professional pest-control operators. A survey conducted last summer found that "a lot" of operators put their products outside and leave them there for a long time. "That will significantly increase wildlife exposures," says Fairbrother.

Nor is she enamoured with the idea of switching to bromethalin. "There is no antidote," she says, noting that this makes the compound a potential risk to children and pets. AR poisoning, by contrast, can be treated using vitamin K.

Better policy, says Fairbrother, might be to ban permanent bait stations and to require pest-control operators to use ARs only as needed. Consumers should also be told about the potential ecological effects of such compounds.

"We know consumers can comprehend and respond to warnings about wildlife exposures," says Fairbrother. A few years ago, she adds, a survey asked consumers whether they knew that rodenticides could affect non-target wildlife. "They had no idea," she says. But once alerted, their response was, "Now that I know, I’m going to be a lot more careful about how I use them".