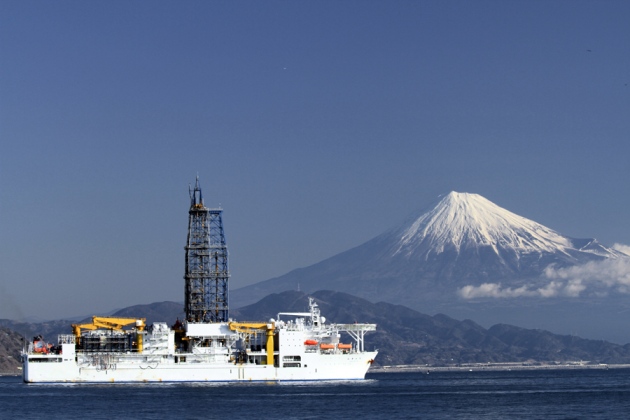 The deep-sea drilling vessel Chikyu investigated the nature of the seismic fault that shook Japan in 2011, triggering the giant tsunami that led to the meltdown of three nuclear reactors at the Fukushima Daiichi power plant.

The devastating 2011 earthquake and tsunami in Japan shocked researchers who did not expect that the seismic fault involved could release so much energy. Now the world's deepest-drilling oceanographic ship has been able to pin down the odd geology that made this disaster so horrific.

The fault turns out to be unusually thin and weak, the researchers report in Science this week1–3. The results will help to pin down whether other offshore faults around the world are capable of triggering the same scale of disaster.

“If this kind of thing is more common than thought, we have to rethink our risk assessments,” says Kelin Wang at the Geological Survey of Canada in Victoria, who was not involved with the new study.

The magnitude-9 Tohoku-Oki earthquake of 11 March 2011 was really two quakes in one: a conventional, deeper quake near the epicentre that caused the ground to shake; and an odd, shallow quake further out to sea that caused an astonishing, record-breaking 50 metres of sideways land slip. It was this displacement of the sea floor that kicked up a massive tsunami. In the textbook version of so-called ‘subduction zones’, where an oceanic plate dives under another tectonic plate, as it does in this area, the shallow portions near the sea floor should be resistant to slipping: as the soft sediments move, friction is meant to build up and stop further sliding. But in this case, the slip was severe.

In an attempt to understand why, a team of researchers quickly put together the Japan Trench Fast Drilling Project. They enlisted a Japanese research ship, the Chikyu, which drilled nearly 1 km deep into the sea floor under nearly 7km of water. After some initial technical problems, the team managed to extract a core from the fault in May 2012, and to install temperature sensors in one of the boreholes in the following July.

The coring revealed a very thin clay layer, about 5 metres thick, separating the two sliding tectonic plates1. “That’s just weird,” says Emily Brodsky of the University of California, Santa Cruz (UCSC), who is an author on all three Science papers this week. “Usually it’s tens of metres or more.” Lab tests confirmed that this wet clay layer is extremely slippery, and gets even more so under stress2. As sliding creates friction and heat, water in the clay gets pressurized and pushes up against the impermeable rock around it. That “jacks open the fault” says Brodsky, allowing it to slip even more.

The temperature sensors found that more than a year after the quake, the fault was still up to 0.31 °C warmer than its surroundings3. From this they could extrapolate how much heat was generated from friction during the sliding event. Their calculations confirmed the very low friction of the 5-metre-thick clay layer.

“The rule of thumb is that fault-zone rocks have a friction six to eight times greater than what we see here,” says Brodsky. “That’s a big deal.” Wang confirms that the finding is odd: “What’s surprising is that this is the friction during a quake,” he says, a time when the textbooks say that friction should be higher, not lower, than normal. It’s reassuring that all three lines of evidence — the core, the lab work, and the temperature sensors — all give the same friction results, says Brodsky. “Any one of them might lead you to say ‘that’s a weird result’. All together, you start to believe it.”

The results mesh with a theoretical model, published by Nature this January, which proposed how supposedly-sticky faults might overcome their supposed resistance to sliding4. It too suggested that fluid pressure could make such faults — including the middle section of the San Andreas fault in California — capable of giant slips.

And does the same odd geology appear in offshore faults elsewhere, making them capable of producing giant waves? It could, says Casey Moore, also at UCSC and an author on the new work. “There’s a lot of clay in the ocean,” he says. Alaska, Indonesia and South America could theoretically have similar clay layers, he says, although there have not been enough boreholes drilled to find out.

Only a handful of underwater faults are within reach of drill ships: researchers have so far breached faults in Barbados, at the Nankai trough further south in Japan, and in Costa Rica. The Nankai trough, in particular, has a very different geology to the Tohoku fault. Says Brodsky: “At least, we now know what to look for.”