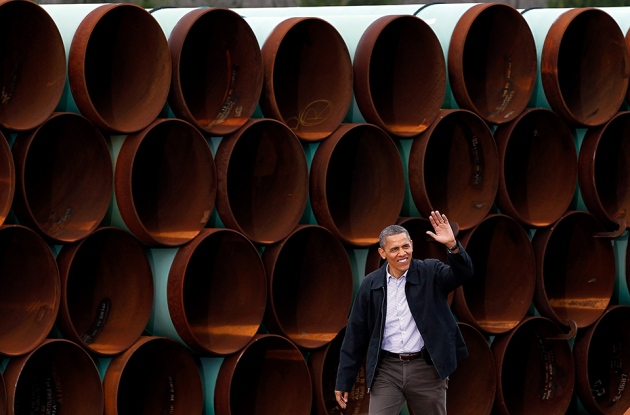 US President Barack Obama says that concerns about climate change drove his decision.

“America is now a global leader when it comes to taking serious action to fight climate change,” he said in remarks at the White House. “And frankly, approving this project would have undercut that global leadership.”

The 1,900-kilometre pipeline was to have carried crude oil from the tar sands of Alberta, Canada, to existing pipelines in the US Midwest that run to refineries along the Gulf of Mexico. The project, backed by pipeline firm TransCanada, was controversial in part because cumulative greenhouse-gas emissions from tar-sands oil are up to 20% higher than those from conventional crude, on average.

Obama’s announcement comes less than a month before the start of United Nations climate talks in Paris, which are expected to produce a new international agreement to combat global warming. The timing pleases environmentalists, who have pushed the pipeline to the top of the US political agenda with a sustained campaign that included public demonstrations at the White House.

“Rejecting the pipeline makes it tougher to dig up tar sands that would only add more fossil fuels to the fire,” said Lou Leonard, vice-president for climate change at the World Wildlife Fund in Washington DC, in a statement. “We hope it continues the momentum we’re seeing to ratchet up climate ambition for Paris and beyond.”

Republican lawmakers have argued just as vociferously for the pipeline, accusing environmentalists of trying to kill jobs and drive up energy prices. Keystone XL vaulted into the US presidential campaign agenda in 2012, and its spectre will haunt next year’s race to pick Obama’s successor. Several Republican presidential candidates quickly vowed to reverse Obama’s decision on the pipeline if given the chance.

“When I'm president, Keystone will be approved, and President Obama's backwards energy policies will come to an end,” tweeted Republican contender Marco Rubio, a Senator from Florida.

Obama addressed his critics head on in his White House speech, arguing that there is no economic justification to approve Keystone XL. Oil production in the United States is at its highest level in years, he said, and oil prices have fallen sharply. Obama also noted that the US economy is growing even as greenhouse-gas emissions decline — due in part to his administration’s regulations to curb vehicle emissions of carbon dioxide.

Climate science: A line in the sands

Some industry analysts argue that the cancellation of Keystone XL will have a minimal impact on the tar sands’ overall greenhouse-gas output, however, because energy companies can merely ship their product to market by rail or through other pipeline projects that are already in the works.

“Keystone was a very prominent project given the symbolic nature it took on, but there are a lot of projects and options out there,” says James Burkhard, vice-president of the energy consultancy IHS Energy in Washington DC.

His firm estimates that oil production from the tar sands could increase by up to 25% by 2020 compared to the 2014 level, based on projects that are already approved and under construction. The price of oil exerts the strong influence over oil-sands investment, Burkhard says — but the cancellation of Keystone XL boosts uncertainty about tar-sands development after 2020.

And there is some evidence that this uncertainty is already having an impact: on 27 October, energy giant Shell cancelled its Carmon Creek tar-sands extraction project, citing the difficulty in shipping Canadian oil to markets. Another energy firm, Statoil, voiced similar concerns when it cancelled another tar-sands venture last year.

Pipeline emissions up to four times worse than predicted

Shell is not abandoning Alberta altogether, however. Hours after Obama rejected the pipeline, the company formally launched a project to capture and store more than 1 million tonnes of CO2 each year at an oil-processing plant in the province. But the Can$1.35-billion (US$1-billion) project relies heavily on subsidies, and there is as yet no plan to make such projects economically viable moving forward, says Simon Dyer, regional director for Alberta at the Pembina Institute, an environmental think-tank in Calgary.

Dyer says that Obama’s decision on Keystone XL could help to reshape Canada’s climate policy. The country’s new prime minister, Justin Trudeau, is a supporter of Keystone XL who has also pledged to combat climate change. And Alberta’s new premier, Rachel Notley, plans to release parts of a climate policy for the province before the UN Paris meeting begins.

If Canada wants to develop markets for its oil, Dyer says, it has to create a credible climate policy and decide how much of its carbon budget should go to the tar sands. “This is an extremely controversial and polarizing thing to say in Canada, even though logically and scientifically it makes a lot of sense,” Dyer says. “The conversation is long overdue.”

The story has been updated with information on political reaction in the United States and Canada.