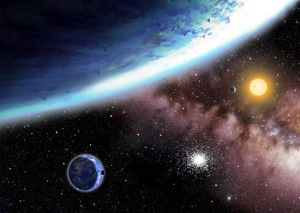 NASA’s Kepler spacecraft has discovered two planets that are the most similar in size to Earth ever found in a star’s habitable zone — the temperate region where water could exist as a liquid.

The finding, reported online today in Science1, demonstrates that Kepler is closing in on its goal of finding a true twin of Earth beyond the Solar System, says theorist Dimitar Sasselov of the Harvard-Smithsonian Center for Astrophysics in Cambridge, Massachusetts, who is a member of the Kepler discovery team.

Both planets orbit the star Kepler-62, which is about two-thirds the size of the Sun and lies about 1,200 light years (368 parsecs) from the Solar System. The outermost planet from the star, Kepler-62f, has a diameter that is 41% larger than Earth’s and takes 267 days to circle its star. The inner planet, Kepler-62e, has a diameter 61% larger than Earth’s and a shorter orbit of 122 days.

Kepler detected the planets by recording the tiny decrease in starlight that occurs when either of them passes in front of their parent star. Astronomers used those measurements to calculate the planets’ relative size compared to that star.

In the Science paper, the Kepler team — led by principal investigator William Borucki of NASA — suggests that the planets are solid, but may be rocky or icy. But Sasselov believes that the two orbs are likely to be covered entirely by oceans, based on his own analysis in an arXiv preprint2 co-authored with colleagues at Harvard-Smithsonian and the Max Planck Institute for Astronomy in Heidelberg, Germany. They theorize that the two water worlds are either liquid all the way down to their core or have a solid surface just beneath a shallower ocean. The latter model would be more conducive to life as we know it on Earth, where a recycling of material and energy from hydrothermal vents can sustain organisms, Sasselov says.

But some recycling could also occur in a much deeper ocean, owing to deposits of methane and other volatiles trapped in a layer of high-pressure, underground ice that could later be released by convection into the liquid, he notes. Sasselov and two other collaborators describe that model in a preprint on the arXiv server3, which is due to be published in the Astrophysical Journal.

The planets’ properties “are all consistent with being habitable”, says Lindy Elkins-Tanton, who directs the department of terrestrial magnetism at the Carnegie Institution for Science in Washington DC. However, it is not guaranteed that the two planets have enough carbon dioxide, a greenhouse gas, to keep the planet warm enough so surface water can exist as a liquid as the researchers have assumed, she cautions.

Jonathan Lunine, a planetary scientist at Cornell University in Ithaca, New York, says that it is impossible to know the composition of the two exoplanets because scientists have not been able to calculate their masses. That is because Kepler-62e and Kepler-62f exert too feeble a gravitational tug on their parent star to be detected by any existing telescope.

The planets also lie too far away from Kepler-62 for astronomers to use its light to hunt for chemical elements in the planets' atmospheres. Nonetheless, “these are the closest yet to the Earth twin everyone wants to see,” Lunine says.