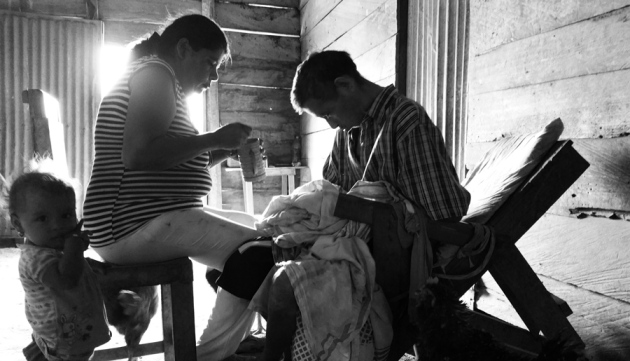 People in developing nations are aiding research into the genetics behind Huntington’s disease.

Dilia is the oldest of an unusual crowd of people due to meet Pope Francis this week at the Vatican. The 79-year-old widow from rural Colombia married into a family whose members carry the gene for Huntington’s disease, a hereditary neurodegenerative disorder. Fate was cruel. Of her 11 children, 9 inherited the disease. Five have died and the remaining four are sick. The next generation is affected, too. One grandchild has died and five more show symptoms.

Those symptoms — involuntary, jerky movements accompanied by mood swings and cognitive decline — are aggressive and carry stigma. Patients and their families often live out of sight and in dreadful conditions, especially in developing nations. Dilia’s village has limited access to running water.

Despite their own hardship, many have helped research into the condition — with little tangible reward. Most of them are Catholics, so their meeting with Pope Francis is a thank you from the scientists who arranged the event. These researchers are acutely aware of how much they have relied on the patients — the gene that causes Huntington’s was discovered thanks to tissue donations from poor Venezuelan families — and that they have not been able to do anything to change their dire situation.

The fact that Pope Francis quickly agreed to meet the families speaks to his hallmark philosophy of reaching out to poor and disadvantaged people. But it is also further evidence of a new openness towards science, which has followed a 2015 encyclical — a letter of guidance on particular themes written by a pope to his bishops — called Laudato si’. The encyclical argued for better stewardship of the planet and excited scientists with its forthright pronouncements on the need to control greenhouse gases and with its implicit acceptance of the principles of evolution in well-informed discussion of the need to protect biodiversity. It also acknowledges the value of scientific and academic freedom in society, and the need for open scientific debate on advances in biology.

The Huntington’s event is a gesture that shows in a small but significant way in which religious leaders and science can work towards a common goal.

While the Vatican has supported its elite Pontifical Academy of Sciences for more than 80 years, other grass-roots initiatives are emerging. For example, last month Italian researchers collaborated with The Lancet to organize a conference in Rome called (with undeniable hubris) The Future of Humanity Through the Lens of Medical Science. Attended by Nobel laureates and Vatican officials, its discussions ranged beyond biomedicine to encompass themes such as climate change and migration, mirroring the spectrum of Laudato si’.

There is a chasm between religion and science that cannot be bridged. For all its apparent science-friendliness, Laudato si’  sticks to the traditional Vatican philosophy that the scientific method cannot deliver the full truth about the world. However, there is still much to be discussed on how each side can help the other to converge on shared goals.

The Catholic Church has more than 1.2 billion members and can thus have broad influence on the acceptance of facts that some politicians choose to distort — such as the existence of anthropogenic climate change. Scientists can provide technical solutions for poor and sick people, thereby assisting the work of missionaries.

In Rome, Huntington’s researchers still desperately seeking a treatment for the disease will have an opportunity to discuss with Pope Francis sensitive issues relating to avoidance of the disease, namely contraception and embryo selection. Francis rarely misses an opportunity to reiterate his view of the sanctity of the human embryo (a theologically debatable Vatican position that has hindered important stem-cell research in some countries) but he seems to keep his views on contraception — outlawed by the Church — deliberately ambiguous. The special audience may help to encourage a much-needed move from the Vatican towards the mercy (and reality — Catholics in rich countries routinely ignore the ban) of finally allowing followers, including those with devastating hereditary disease, to take control of their fertility.