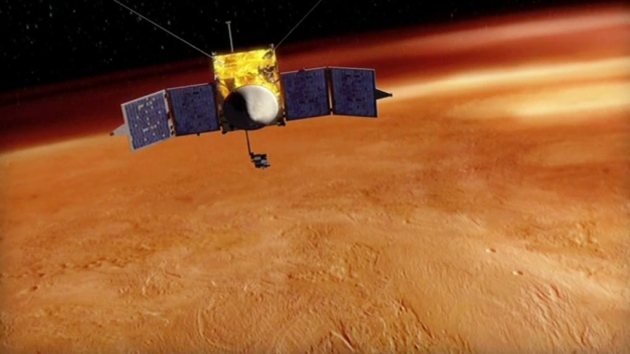 The MAVEN probe is now on an elongated elliptical orbit around the red planet, and will perform additional manoeuvres to get to its final, lower orbit.

In the end, there were zero minutes of terror for NASA’s latest Mars probe as it closed in on the red planet. After a 10-month, 711-million-kilometre journey, the probe fired its engines flawlessly for 34 minutes and 26 seconds on 21 September, then let itself be gravitationally captured into Martian orbit.

Ecstatic engineers and scientists crowded the hallways outside the mission-control room for the the US$671-million MAVEN (Mars Atmosphere and Volatile Evolution) at Lockheed Martin Space Systems in Littleton, Colorado.

“You get one shot with Mars orbit insertion, and MAVEN nailed it tonight,” says David Mitchell, the mission’s project manager at NASA’s Goddard Space Flight Center in Greenbelt, Maryland.

In its current orbit, the closest that MAVEN will get to the Martian surface is 380 kilometres. Controllers will spend the next six weeks shrinking the orbit to a narrower ellipse that will dip the craft to 150 kilometres during each 4.5-hour revolution.

As it orbits, MAVEN will fly through the rarefied upper atmosphere and measure how various atoms and molecules interact with the solar wind. Project scientists aim to calculate how fast the solar wind is stripping the atmosphere away, then use that to determine the history of habitability on Mars.

The Martian atmosphere, which consists mostly of volatile compounds such as carbon dioxide, nitrogen and water, has mostly disappeared over millions of years, and the planet has become a cold, dry desert. “This is a global climate-change mission for Mars,” says John Clarke, a mission investigator and a planetary scientist at Boston University in Massachusetts.

Scientists think that a number of processes could be at play. In some cases, the kinetic energy of atoms and molecules bouncing against one another may be enough to eject some from the atmosphere. In others, the Sun’s ultraviolet rays strip electrons away, and when the remaining ionized particles re-combine with other electrons, some gain enough speed to escape. Figuring out which of these processes dominate, under regular and changing conditions such as solar storms, is MAVEN’s main goal.

The engine burn consumed about 1,000 litres of the more than 1,900 litres of fuel it had on board when it left Earth. Some 400 litres remain for mission controllers to perform five more engine burns to get it into orbit, and control it through and beyond its nominal mission of one Earth year.

MAVEN’s eight science instruments will be deployed gradually over the coming weeks. Some of them, such as a pair of tools to measure solar-wind interactions, began taking data while the spacecraft was on its way to Mars; the remainder will start operating over the coming weeks. The first formal announcement of results is not expected until early next year.

In addition to the science instruments, MAVEN carries a communications package that NASA is counting on to relay data to and from the rovers on the surface. Currently, that role is being fulfilled by the nine-year-old Mars Reconnaissance Orbiter, but the craft is not expected to last much longer.

The probe is joining five other missions — three orbiters and two rovers — already operating at Mars. But principal investigator Bruce Jakosky of the University of Colorado Boulder says that there is still plenty to learn. “We make fundamental discoveries every time we go,” he says. “We’re looking at a part of the Mars environment system we haven’t explored in detail.”

And on 24 September, the Indian Space Research Organisation (ISRO) will attempt to join by guiding its Mars Orbiter Mission spacecraft into orbit. If it succeeds, it will become only the fourth space agency to have successfully sent a spacecraft into orbit around Mars.

“Mars is still really hard — half the spacecraft we lose,” says John Grunsfeld, NASA’s associate administrator for science. Entering Martian orbit “will be a nail-biter for the Indians as well”, he says.

All Mars spacecraft will make a coordinated set of observations on 19 October, when comet Siding Spring zips within 138,000 kilometres of the planet, offering a rare close look at a long-period comet. Among other things, MAVEN will use its ultraviolet spectrograph to study the Martian atmosphere two days before and two days after the comet’s passage and check for any changes as a result of dust bombardment.