An extinct primitive marine vertebrate had the sharpest dental structures ever known — with tips just one-twentieth of the width of a human hair, but able to apply pressures that could compete easily with those from human jaws.

The razor-sharp teeth belonged to conodonts, jawless vertebrates that evolved some 500 million years ago in the Precambrian eon and went extinct during the Triassic period, around 200 million years ago. The creatures roamed the planet for longer than any other vertebrate so far–– and despite their lack of jaws, they were the first creatures to evolve teeth. 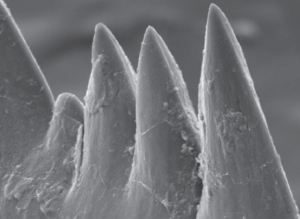 Fossilized conodont teeth, seen here in a scanning electron microscope image, are sharper than any other teeth ever found. The tips are just 2 micrometres across.

To find out how these proto-teeth may have functioned, researchers used X-rays to create computer models of eight paired, food-processing structures from fossils of the conodont species Wurmiella excavata. Using finite-element analysis — a method commonly applied to model the effects of physical forces on aeroplanes — the team then compared the conodont teeth with similarly sized bat molars. The results are published today in Proceedings of The Royal Society B1.

“We wanted to find out how these delicate teeth fitted together and how they could perform feeding functions,” says Philip Donoghue, a palaeobiologist at the University of Bristol, UK, and a co-author of the paper.

The team found that the conodonts did not process food using a mechanism based on muscular force, as mammals do. Instead, they relied on minuscule forces that became extremely concentrated as a result of their teeth’s extreme sharpness, and the special way in which they gnawed.

Unlike mammalian teeth, which close perpendicularly (up and down), conodont teeth turned that action 90 degrees, slicing food from left to right. “The inter-angles of the blade-like teeth would have been trapped first at the back, rocked forward and separated again,” explains Donoghue.

But super-sharp teeth can cause problems. “If you have sharp teeth they are more likely to break,” says Donoghue. To overcome this, the animals seem to have been able to re-sharpen and repair worn teeth throughout their lives — a quality that other vertebrates have failed to evolve.

"Conodonts were the first vertebrates to 'experiment' with the evolution of complex food-processing teeth,” says Mark Purnell, a palaeontologist at the University of Leicester, UK. The latest work, he adds, “reveals conodonts’ independent lineage. They evolved dentitions including both slicing and interlocking crushing teeth millions of years before mammals or other vertebrates with jaws."

This discovery sheds light on the dental evolution of vertebrates. Fossilized conodont teeth are abundant in marine sedimentary rocks — the long-extinct animals could therefore provide many opportunities to test whether different groups of vertebrates independently converged on the same solutions to the problems of breaking down their food, says Purnell.

Conodonts, he says, demonstrate the power of natural selection. Facing feeding problems, these small animals explored food processing using materials and mechanisms similar to those of vertebrates with jaws, despite their physiological differences. "In some cases the resemblance of conodont teeth to those of other vertebrates is very striking, but they also produced some elegant and novel solutions tailor-made to their own needs," says Purnell.