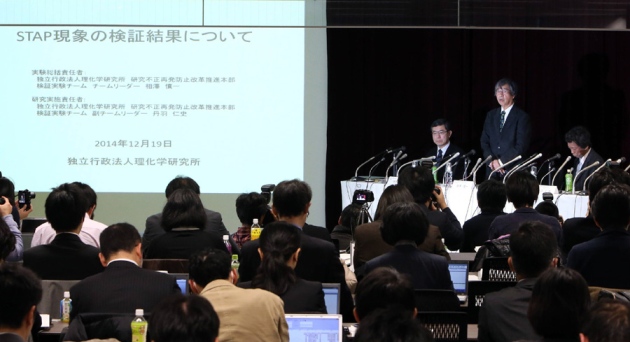 A RIKEN team announced on 19 December that it was unable to reproduce Obokata's controversial results.

Haruko Obokata, the stem-cell biologist whose papers caused a sensation earlier this year before being retracted, has resigned from the RIKEN Center for Developmental Biology in Kobe, Japan.

Her emotional resignation letter was posted on RIKEN’s website on 19 December alongside results of the organization’s own investigation, which failed to confirm her claims of a simple method to create pluripotent stem cells.

Such cells are scientifically valuable because they can develop into most other cells types, from brain to muscle. But they are difficult to make.

Obokata’s method — known as stimulus-triggered acquisition of pluripotency, or STAP — was published in Nature in January1, 2. However, the results immediately came under suspicion, and the papers were retracted in July. A few weeks later, one of the paper’s co-authors, Yoshiki Sasai, took his own life.

Obokata wrote she could not “find words enough to apologize... for troubling so many people at RIKEN and other places”.

In an accompanying statement, RIKEN president Ryoji Noyori wrote that Obokata had been subject to extreme stress over the affair, and that in accepting her resignation he hoped to save her "further mental burden".