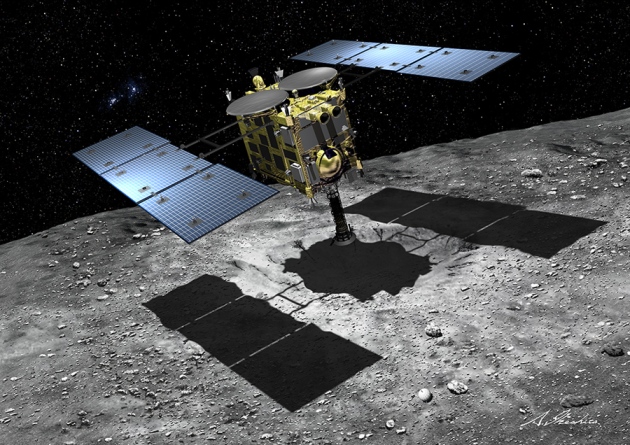 Hayabusa-2 was due to blast off this weekend on a mission to asteroid 1999 JU3.

Japan's space agency has today delayed the launch of the Hayabusa-2 spacecraft after bad weather was forecast for the planned launch date of 30 November. The new launch will be no earlier than 1 December.

Scheduled to lift off from the Tanegashima Space Center in southern Japan, Hayabusa-2's target is a 900-metre-long space rock that is thought to hold chemical secrets from the Solar System’s infancy.

Hayabusa-2 is a beefed-up version of the first Hayabusa spacecraft, which touched down on the asteroid Itokawa in 2005 and returned to Earth five years later. That was the world's first mission to bring back asteroidal dust. Its battle to survive a series of challenges — from rough landings to lost communications — captivated millions. Scientifically, the first Hayabusa confirmed a suspected link between the compositions of certain classes of asteroids and meteorites1, and discovered evidence of space weathering and other recent cosmic changes2.

Now, Hayabusa-2 aims to raise the bar with an ambitious suite of experiments to probe the asteroid 1999 JU3. This space rock is a 'C-type' asteroid, meaning that it is darker and probably more carbon-rich than the 'S-type' Itokawa. The goal is to collect material that is relatively unchanged from 4.5 billion years ago, when gas and dust were clumping into particles around the newborn Sun. The asteroid may contain organic compounds, hints of water, or both.

“We think of C-type asteroids as being less altered than others,” says Lucy McFadden, a planetary scientist at NASA’s Goddard Space Flight Center in Greenbelt, Maryland. “Bringing that material back and being able to look at it in the lab — I think it’s going to be very exciting.”

If the mission launches successfully without any further delays, it will loop once around the Sun and then slingshot past Earth to reach 1999 JU3 in July 2018. It will then settle in for an 18-month stay, manoeuvring by expelling tiny bursts of charged plasma from its ion engines as it orbits the asteroid.

As it circles 1999 JU3, Hayabusa-2 will probe the asteroid with a set of infrared instruments to determine how heat is radiating from it and how minerals are distributed across its surface. The spacecraft will also study exactly how the asteroid is spinning, so that mission managers at the Japan Aerospace Exploration Agency (JAXA) can determine where to land.

Three separate forays to the asteroid's surface are planned. Each time, the tip of a sampler probe will make contact with the surface as the spacecraft hovers above, scooping up materials that are collected in a catcher cup. Before its third and final sample run, Hayabusa-2 will drop a 2-kilogram copper saucer onto the asteroid, aiming to create a small crater that would expose fresh material beneath the surface, which would then be collected.

As if three sampling visits are not enough, Hayabusa-2 also carries a bevy of other probes that it will toss onto the surface. It will drop a shoebox-shaped lander called MASCOT that carries a camera, microscope and other instruments to explore the asteroid surface close up.

Three smaller MINERVA-II rovers will also be dropped onto the asteroid, which will tumble across the surface while photographing it. The first Hayabusa carried one of these robots, but it missed the asteroid.

The MASCOT lander team is taking several lessons from the European Space Agency's Philae lander, which touched down on comet 67P/Churyumov–Gerasimenko earlier this month, says Tra-Mi Ho, MASCOT project leader at DLR, the German Aerospace Center. Philae bounced several times on landing and came to rest in a unexpected location where its batteries quickly drained.

Hayabusa-2's lander will be controlled by the same operations team that controlled Philae, and "we will profit from the same expertise" in dealing quickly with landing obstacles, says Ho. The science team also plans to switch on MASCOT's four instruments as soon as possible after landing, to extract as much as possible before the lander's energy runs out, says team member Ralf Jaumann, a DLR planetary researcher.

Whatever samples Hayabusa-2 manages to gather, it will depart the asteroid in 2019 and fly back to Earth. In December 2020, it is scheduled to parachute into the skies over Australia and land.

Hayabusa-2 scientists plan to share samples and data with the first US asteroid-sampling mission, OSIRIS-REx, which is due to launch in 2016. The US spacecraft will visit the asteroid Bennu, which at 500 metres across is smaller than 1999 JU3 but is also thought to be rich in carbon.

Comparing and contrasting the two asteroids is scientifically important, says OSIRIS-REx principal investigator Dante Lauretta, a planetary scientist at the University of Arizona in Tucson. “It’s going to be a really great collaboration.”