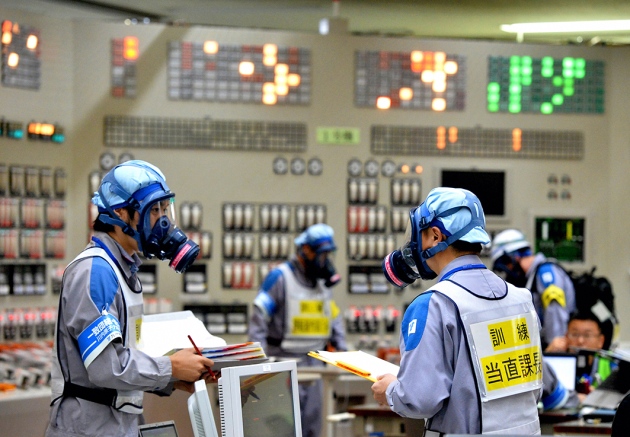 Workers at the Sendai nuclear power plant conduct an emergency safety drill ahead of the restart that ended Japan’s two-year nuclear freeze.

The Sendai Nuclear Power Plant on the island of Kyushu broke a four-year lull on 11 August when it switched one of its reactors back on. The restart is the first since Japan’s nuclear-power industry ground to a halt two years ago following safety concerns in the wake of the 2011 Fukushima Daiichi disaster.

It will help the world’s third-largest economy to lower its carbon emissions. But the government energy plan that includes this shift in policy is much too modest if Japan is to help keep global temperatures from rising by more than 2 °C above pre-industrial levels, say analysts.

The plan essentially returns the nation to its pre-Fukushima energy mix of mainly coal and nuclear power, apart from a small but substantial increase in solar. “The mindset of the government and the heavy industry is still the same: to try to keep nuclear and also coal,” says Tetsunari Iida, head of the Institute for Sustainable Energy Policies in Tokyo.

Before the disaster, Japan had aimed to produce about half of its electricity from nuclear sources. Following the meltdowns, the short-lived cabinet of then prime minister Yoshihiko Noda considered phasing out nuclear energy entirely (see Nature 486, 15; 2012) and replacing it with renewables and fossil fuels.

However, the current government of Prime Minister Shinzo Abe, which took over in 2012, has put nuclear back into the picture, with plans to restart as many reactors as possible (see Nature 507, 16–17; 2014). In July, the government submitted its targets for reducing greenhouse-gas emissions to the United Nations, ahead of a UN global-warming summit in Paris this December. The pledge included a goal for nuclear energy to fulfil at least 20% of Japan’s electricity needs by 2030. Renewable sources — mostly hydropower but also solar — would contribute a minimum of 22%.

This would reduce Japan’s carbon footprint compared with the years since Fukushima, when electricity companies bridged the nuclear gap by ramping up the use of coal, oil and, especially, liquefied natural gas. But fossil fuels would still account for more than half the power generated in 2030. Nuclear and renewables would help keep carbon dioxide emissions in check, but overall emissions would be cut by only 18% from 1990 levels. The European Union, by comparison, pledged 40% cuts from 1990. “I think that the government understands and acknowledges the climate goal and tries to make its target consistent with it, but industrial and economic criteria such as lowering electricity costs are given higher priority,” says Seita Emori, who heads a climate risk-assessment team at Japan’s National Institute for Environmental Studies in Tsukuba. The 2030 emissions target “doesn’t look really sufficient for the climate goal”.

The government sees an especially modest role for wind, projected to contribute only 1.7% of electricity generation by 2030. (Germany, by comparison, already derives around 8–9% of its power from wind.) Iida says there is an “irrational bias” against wind that is deep-rooted in Japan’s energy industry.

Moreover, the way Japan’s energy market is structured, with a few de facto regional monopolies, is stacked against wind, favouring instead sources that are established, such as nuclear and fossil fuels. “Power companies control both the grid and existing power plants,” says Tomas Kåberger, head of the Tokyo-based Japan Renewable Energy Foundation. Wind would take a share of the market away from the utilities’ power plants, but the same utilities could deny wind-power companies access to the grid, says Ali Izadi-Najafabadi, who heads the Tokyo office of the consulting company Bloomberg New Energy Finance. The utilities must cite “technical grounds” for such a refusal, but “there is no independent grid operator, so it’s hard to judge those technical grounds”, he says.

To switch back on, the Sendai plant had to satisfy increased scrutiny from regulators and the courts. Following the 2011 meltdowns, the Japanese government overhauled its nuclear safety policy, reviewed its atomic-energy infrastructure and created the independent Nuclear Regulation Authority (NRA). Izadi-Najafabadi says that the NRA showed that it can bite as well as bark when it forced utilities to decommission some of their more troublesome reactors. Still, anti-nuclear advocates complain that reforms have not gone far enough, in particular on evaluating seismic and volcanic risks and preparing evacuation plans, and that the NRA has bowed to political pressure to speed up its reviews.

Nuclear-safety culture has made progress since Fukushima, says Amory Lovins, co-founder of the Rocky Mountain Institute, an energy think tank in Snowmass, Colorado. But, he adds, “there is still a troublesome and pervasive lack of transparency”.