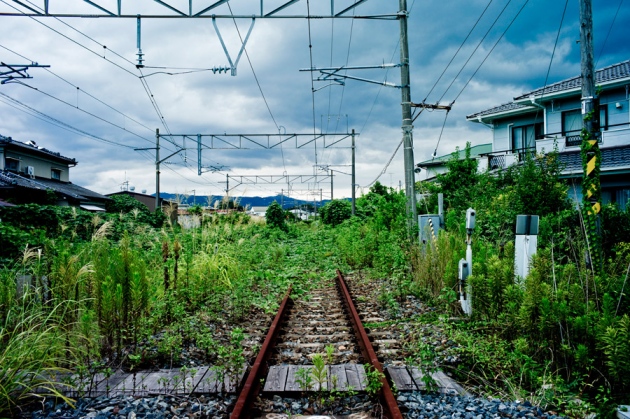 An abandoned train line in Namie, Japan, inside the restricted area around the Fukushima Daiichi plant.

Three years after a tsunami led to reactor meltdowns at Japan’s Fukushima Daiichi nuclear power station, the country is at a crossroads in terms of energy policy. A draft law released last week suggests that, despite the previous government’s promise of a ‘zero-nuclear’ future in the wake of the disaster, the current administration is ready to re-embrace the technology. Yet the announcement came just weeks before the opening of a ¥10-billion (US$98-million) renewable-energy research centre in Fukushima prefecture that aims to be at the forefront of green technology. Which way will Japan turn?

The reformist wave that swept Japan after the 2011 disaster included proposals to supply all of the country’s energy from renewable sources. Nowhere is taking this more seriously than Fukushima prefecture, which plans to use an array of giant solar panels, biomass plants and windfarms to supply all of its energy by 2040. Two floating, 7-megawatt wind turbines, the world’s largest, are scheduled to come online in the next year.

The opening of the Fukushima Renewable Energy Institute in April will bolster the prefecture’s vision. The institute is in Koriyama, 60 kilometres west of the stricken nuclear plant, and has been established by the Tsukuba-based National Institute of Advanced Industrial Science and Technology (AIST). It has attracted interest from electronics companies such as Panasonic and Sharp, and foreign collaborations are also in the pipeline, including one with the Fraunhofer Institute for Solar Energy Systems in Freiburg, Germany. Inside, about 100 researchers will work across areas including solar, hydrogen, wind and geothermal power.

Deputy director Tetsuo Munakata says that the institute will expand on the long-running research programmes of AIST, and he points to concrete goals such as reducing the thickness of silicon wafers for solar cells to 80 micrometres in seven years.

But some see the institute as a showpiece with little chance of success. Critics point out that Japanese solar-panel makers are already struggling to compete with the lower costs of Chinese manufacturers. Tetsunari Iida, head of the Institute for Sustainable Energy Policies in Tokyo, says that the Fukushima institute lacks experienced hands and will get bogged down with ministerial bureaucracy. “I don’t think we can expect much in terms of practical results,” he says.

Sceptics also point to what seems to be a government move towards nuclear energy. Despite continued leaks of radioactive water stored at Fukushima Daiichi, and extensive exclusion zones remaining around it (see ‘Fukushima: the legacy’), the draft energy plan says that the government will push to restart Japan’s 48 operable reactors, all of which were closed after the earthquake that triggered the disaster. The plan is expected to be approved in the spring.

But Munakata says that the new institute also underlines the government’s commitment to renewable energy. “There’s no way it isn’t going to keep investing in renewables,” he says. 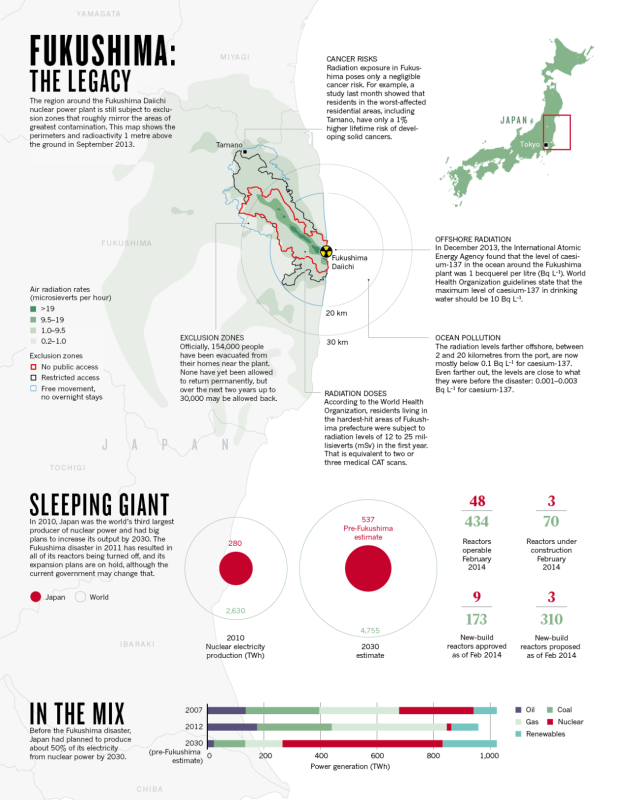