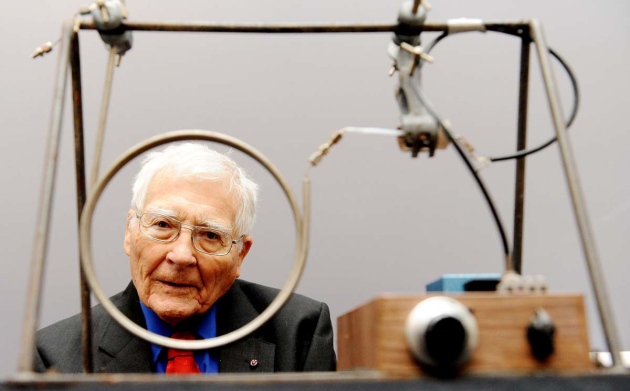 The new exhibition features some of scientist James Lovelock's inventions, including this homemade gas chromatography device.

A new exhibition at the Science Museum in London features the personal archives of one of the most influential modern scientists; James Lovelock. ‘Unlocking Lovelock: Scientist, Inventor, Maverick’ tells the story of the British scientist's work in medicine, environmental science and planetary science, and displays documents ranging from childhood stories, doodle-strewn lab notebooks and patents to letters from dignitaries such as former UK prime minister (and chemist) Margaret Thatcher. Also included are several of Lovelock’s inventions, such as the electron-capture detector that enabled the measuring of ozone-destroying chlorofluorocarbons in the atmosphere in the 1970s.

Lovelock, born in 1919, is best known for the ‘Gaia hypothesis’, which proposes that the Earth functions as a self-regulating system, similar to a living organism. The idea sparked controversy when Lovelock and microbiologist Lynn Margulis proposed it in the 1970s, but environmental and Earth scientists now accept many of its basic principles. In 2006, his book The Revenge of Gaia predicted disastrous effects from climate change within just a few decades, writing that  “only a handful of the teeming billions now alive will survive”.

This week Lovelock spoke to Nature about his career, his earlier predictions and his new book, A Rough Ride to the Future (reviewed last week in Nature).

Is climate change going to be less extreme than you previously thought?

The Revenge of Gaia was over the top, but we were all so taken in by the perfect correlation between temperature and CO2 in the ice-core analyses [from the ice-sheets of Greenland and Antarctica, studied since the 1980s]. You could draw a straight line relating temperature and CO2, and it was such a temptation for everyone to say, “Well, with CO2 rising we can say in such and such a year it will be this hot.” It was a mistake we all made.

We shouldn’t have forgotten that the system has a lot of inertia and we’re not going to shift it very quickly. The thing we’ve all forgotten is the heat storage of the ocean — it’s a thousand times greater than the atmosphere and the surface. You can’t change that very rapidly.

But being an independent scientist, it is much easier to say you made a mistake than if you are a government department or an employee or anything like that.

That’s impossible to answer. All I can say is that it will be nowhere as near as bad as the worst-case scenario.

Are you still pessimistic about the prospect of finding a political solution to climate change?

In your latest book you advocate not trying to halt climate change but exercising what you call a sustainable retreat. Why is that?

I think it is the better approach. To rush ahead and advance is very much the Napoleonic approach to battle. It is far better to think about how we can protect ourselves. If we’re going to do any good, we should be making more effort to keep our own home a suitable place to live in for the future than desperately trying to save somewhere remote. This is particularly true of Britain. We nearly died in the Second World War for lack of food. Our agricultural production hasn’t gone up enough to supply today’s population with what we would need. This is something we should be looking at carefully, not just applying guesswork and hoping for the best.

Will nuclear energy be part of the future, despite the Fukushima nuclear disaster in Japan?

The business with Fukushima is a joke. Well, it’s not a joke, it is very serious — how could we have been misled by anything like that? Twenty-six thousand people were killed by the magnitude-9 earthquake and tsunami [that caused the nuclear meltdown], and how many are known to have been killed by the nuclear accident? None.

[On the Chernobyl nuclear disaster, Lovelock writes in A Rough Ride to the Future: “The most amazing lies were told, still are told and widely believed… Despite at least three investigations by reputable physicians, there has been no measurable increase in deaths across Eastern Europe.”]

A lot of investment in green technology has been a giant scam, if well intentioned.

Do you feel vindicated about the way many of the ideas in the Gaia hypothesis have now been accepted by Earth-systems scientists?

I think it is a matter of scientific politics. In practice, most of the senior biologists I encountered in later times had no problem with the notion at all. But they fought bitterly at first. It was very funny to talk with John Maynard Smith, Bill Hamilton and Robert May [eminent evolutionary and population biologists], and to discover that none of them had read any of my books or papers — they were judging the idea by what their students told them.

Was some of that criticism helpful?

In the early stages it wasn’t. And on the geology side it was something quite different — the tendency of some geologists to keep their heads in the sediments is very strong, and they won’t shift it. I’m very intrigued by the latest attempt to resuscitate the idea that all of climate regulation is done by rock weathering. The geologists keep on ignoring the bacteria.

A 1984 rejection letter from Nature of your paper outlining the Gaia hypothesis is displayed in the exhibition. What do you think of peer review — is it necessary?

Well, as far as I’m concerned, I don’t have any peer review. But I don’t think it is practical to get rid of it. For run-of-the-mill papers, say if somebody comes up with a really neat method for analysing some component of urine or that kind of thing, it is important to keep it. But not on larger topics.