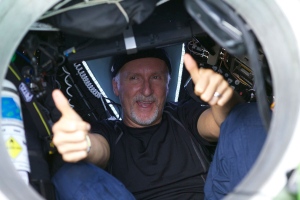 James Cameron is the first person to dive solo to Challenger Deep in the Mariana Trench.

Canadian film-maker James Cameron has become the first person to venture alone to the deepest spot in the ocean. Although technical problems prevented the collection of most of the planned scientific samples, researchers are excited about the accomplishment, which is igniting public interest in deep-sea exploration.

After numerous bad-weather delays, before dawn on Monday morning Cameron began descending through 10,898 metres of water to the Challenger Deep at the bottom of the Mariana Trench, in his purpose-built submersible called DEEPSEA CHALLENGER. “Everyone yelled for joy when we heard that Jim had made it to the bottom,” says the expedition's chief scientist Douglas Bartlett, a marine microbiologist at the Scripps Institution of Oceanography in La Jolla, California. The last time anyone made this dive was in 1960.

Cameron returned with reports of a desolate landscape that he compared to the Moon. “It was a very, very soft, almost gelatinous, flat plane,” he says. It went “as far as I could see.” Throughout the dive the only signs of life were small, free-swimming crustaceans called amphipods. The vast sediment plane appeared lifeless.

Tim Shank, a deep-sea biologist at the Woods Hole Oceanographic Institution in Massachusetts, says that the waters above Challenger Deep are extremely unproductive; there is little algal life at the surface, and, therefore, less food is cycled down to deeper waters. “If it had been a trench with a productive water column, like the Kermadec Trench near New Zealand, I think he would have seen much more biology,” says Shank. However, sediment samples are certain to contain billions of microbes.

“This is the culmination, from my perspective, of a lifelong dream,” Cameron said during a press conference just hours after surfacing. “Most people know me as a film-maker, but honestly, the ocean and the idea of exploration has really kind of always been a stronger driver in my life.”

Deep-sea biologist and former submersible pilot, Cindy Van Dover, director of the Duke University Marine Laboratory in Beaufort, North Carolina, says she has a new hero. “I’ve always admired Cameron, but to pull this off and to do it with such engagement of the public is just really exciting,” she says.

Cameron, along with expedition partners the National Geographic Society in Washington DC and the Swiss watchmaker Rolex, is making a three-dimensional film about his dive, but he had also hoped to collect samples of sediment, water, rock and animal samples using both his sub and a lander that sinks to the bottom and returns to the surface autonomously. But technical problems stymied the plans.

After grabbing one sediment sample, the sub’s hydraulic system failed, freezing the collection devices just as Cameron was about to use them to pick up rocks. “That just means we’ve got to go back and do some more,” Cameron says. The team now hopes to complete three or four more dives in coming weeks. The expedition's scientists are anxious to learn more about life on the rocky sides of the trench.

Cameron says that he is committed to deep-sea exploration. “If we’re successful in proving that this type of vehicle is viable and these technologies have a place, we’ll look to attract some research funding and some additional partners and come back for phase two,” he told Nature.

Shank, who was one of many scientists who consulted with Cameron on the science plan for his expedition, is a co-leader of a programme called Hadal Ecosystem Studies (HADES), which has been designed to answer key questions about life in the deepest parts of the ocean, including Challenger Deep. Cameron and leaders of HADES have discussed potential collaboration on upcoming expeditions. “That’s something we’ll be more than happy to get involved with,” says Cameron.

Van Dover is confident that expanded deep-sea exploration will pay off. “There have got to be amazing ecosystems and odd habitats we hadn’t even imagined before in these trenches,” she says. “I have no doubt that they’re there, I just have no idea what they will be — which is why we do this stuff, right?”