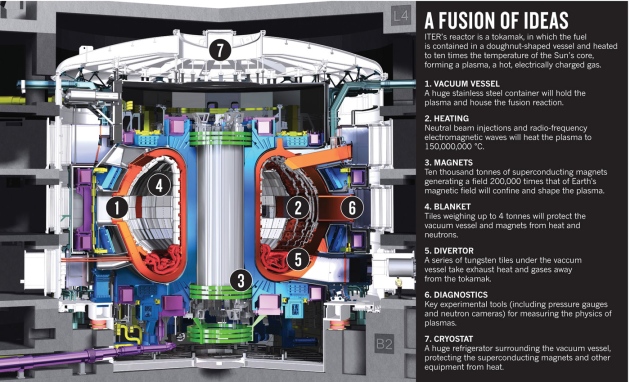 Delays in the installation of key parts of ITER, a multibillion-euro international nuclear-fusion experiment, are forcing scientists to change ITER’s research programme to focus exclusively on the key goal of generating power by 2028. As a result, much research considered non-essential to the target, including some basic physics and studies of plasmas aimed at better understanding industrial-scale fusion, will be postponed.

Nature has learned that the plans form the main thrust of recommendations by a 21-strong expert panel of international plasma scientists and ITER staff, convened to reassess the project’s research plan in the light of the construction delays. The plans were discussed this week at a meeting of ITER’s Science and Technology Advisory Committee (STAC).

The meeting is the start of a year-long review by ITER to try to keep the experiment on track to generate 500 MW of power from an input of 50 MW by 2028, and so hit its target of attaining the so-called Q ≥ 10, where power output is ten times input or more.

ITER, which will be the world’s largest tokamak thermonuclear reactor (see ‘A fusion of ideas’), is being built in St-Paul-lez-Durance in southern France by the European Union, China, India, Japan, South Korea, Russia and the United States at a cost of €15 billion (US$20.3 billion). Q ≥ 10 is seen as its raison d’être, and achieving it would be likely to revitalize public and political interest in fusion. Crucial to that is getting to the point, scheduled for 2027, when the first nuclear fuel would be injected into the reactor. The fuel will be a plasma of two heavy hydrogen isotopes, deuterium and tritium (DT).

The original 2010 research plan foresaw the entire reactor being built by 2020, when ITER was also scheduled to produce its first plasma, using hydrogen as a test fuel. But cost-cutting and cash-flow problems in member states mean that while the reactor is likely to be operating by then, the delivery of some parts is being deferred until several years later. These include some diagnostics devices for analysing the physics of plasmas at the very large scales of ITER, and elements of the heating system that will eventually take the plasmas to 150,000,000 °C.

“The plan was that everything would be procured and installed before first plasma, and then we would go straight into operation with a full set of systems,” says David Campbell, head of ITER’s plasma directorate. Instead, researchers will start with an initial set of instruments and systems, with others added later as upgrades. One of the main aims of the STAC meeting was for ITER to learn what elements of the research programme were essential to keeping it on track to reach DT phase and Q ≥ 10 on schedule. A local plant that will produce tritium, for example, is one key element.

The outcome of the review is also expected to influence ITER member states’ deferral plans, which will be modified to meet the key scientific priorities identified in the review. By fixing a timetable, Campbell says, STAC “will match up delivery schedules to the research plan, so that the research plan is not waiting for stuff to be delivered”.

The likely consequence of capping costs is that some parts of the research plan will be postponed until after 2028. ITER initially aims to produce a Q ≥ 10 for a few seconds, and then for pulses of 300–500 seconds, and work up over the following decade to output ratios of 30 times more power out than in, with pulses lasting almost an hour. Eventually the aim is to develop steady-state plasmas, which will yield information relevant to industrial-scale fusion-power generation. It is experiments relating to the understanding of longer-pulse and steady-state ITER plasmas that are most likely to be delayed beyond 2028.

Research into better plasma performance, and with it greater energy output, may also be held back, along with experiments investigating how to control turbulence, which can damage the reactor wall, and the stability and energy characteristics of plasmas.

Olivier Sauter at the Swiss Federal Institute of Technology in Lausanne, Switzerland, one of the reviewers of ITER’s research plan, says that months or more might be cut from the time needed to reach DT. But ITER’s decision to take shortcuts also carries risks, he adds. To help mitigate these, ITER is working closely with researchers at other tokamaks around the world, such as the Joint European Torus in Oxfordshire, UK, to address some of the uncertainties likely to be encountered in plasma energies and stability.

“It is somewhat unfortunate that the compression of the ITER schedule will limit interesting research opportunities during the early stages of ITER operation, but the mission of ITER is clear,” says Mickey Wade, director of the US national DIII-D fusion programme at General Atomics in San Diego, and a member of the review panel advising STAC. “The ITER physics team has done an admirable job of maintaining a single-minded focus on obtaining Q ≥ 10 operation as early as possible.”