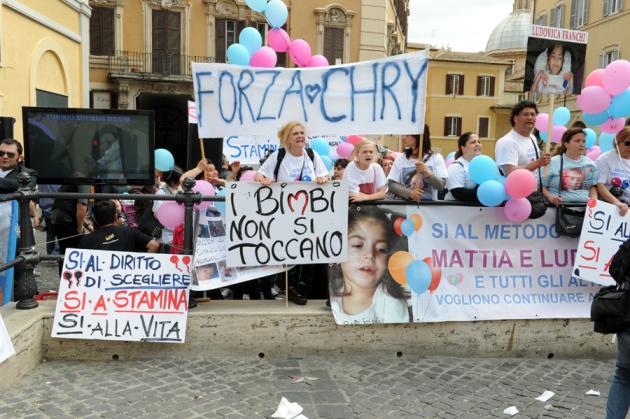 The controversial stem cell therapy has garnered fervent public support, while many scientists decry it as unproven.

Davide Vannoni, a psychologist turned medical entrepreneur, has polarized Italian society in the past year with a bid to get his special brand of stem-cell therapy authorized. He has gained fervent public support with his claims to cure fatal illnesses — and equally fervent opposition from many scientists who say that his treatment is unproven.

Now those scientists want the Italian government to pull out of a €3-million (US$3.9-million) clinical trial of the therapy that it promised to support in May, after bowing to patient pressure. They allege that Vannoni's method of preparing stem cells is based on flawed data.

And Nature's own investigation suggests that images used in the 2010 patent application, on which Vannoni says his method is based, are duplicated from previous, unrelated papers.

The trial is “a waste of money and gives false hope to desperate families”, says Paolo Bianco, a stem-cell researcher at the University of Rome and one of the scientists who says that Vannoni’s 2010 application to the US patent office does not stand up to scrutiny.

“I am not surprised to learn this,” says Luca Pani, director-general of the Italian Medicines Agency (AIFA), which suspended operations at the Brescia-based laboratories of Vannoni's Stamina Foundation in May 2012, after inspectors concluded that the labs would not be able to guarantee contamination-free preparations of stem cells. Inspectors were not shown systematic methodologies or protocols. “We saw such chaos there, I knew that a formal method wouldn’t exist,” he says.

But questions raised over the patent that underpins the methodology needed for the trial could be political dynamite.

Well over 100 people with conditions ranging from Parkinson's to motor neuron disease to coma — nearly half of them children — have already signed up to participate in the government-sponsored trial, despite there being no published evidence that the therapy could be effective.

The Stamina Foundation has been given permission to treat more than 80 people on compassionate grounds since 2007, and Vannoni — who has not published follow-up data on patients — says that hundreds more were lined up waiting for treatment when the lab's operations were suspended. Supporters held angry demonstrations up and down Italy earlier this year.

The therapy involves extracting cells from patients' bone marrow, manipulating them in vitro, and then injecting them back into the same patients. Vannoni has repeatedly avoided revealing details of his method beyond those available in his patent application, which he has referred to as complete.

Nature has independently confirmed that a key micrograph in that patent application, depicting two nerve cells that had apparently differentiated from bone-marrow stromal cells, is not original. A senior stem-cell expert contacted by Nature says that the micrograph shown in Figure 3 of Vannoni's patent is identical to one in Figure 2b of a research paper published by in 2003 by a Russian and Ukrainian team1. 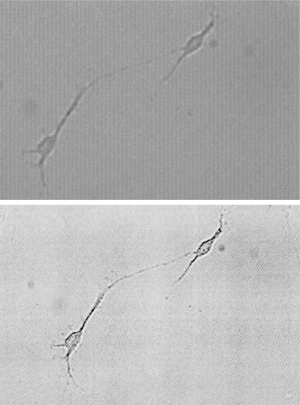 The micrograph in Figure 3 from Vannoni's 2010 US patent application (top) and Figure 2b from the 2003 Russian and Ukranian paper.

Elena Schegelskaya, a molecular biologist at the Kharkov National Medical University, and a co-author of the 2003 paper, told Nature that the micrograph under scrutiny had originated with her team.

Like Vannoni's patent, Schegelskaya's paper looked at coaxing bone-marrow cells to differentiate into nerve cells. But whereas Vannoni's patent says that the transformation involved incubating cultured bone-marrow cells for two hours in an 18-micromolar solution of retinoic acid dissolved in ethanol, Schegelskaya's paper uses a retinoic acid solution with only one-tenth of that concentration, and incubates the cells for several days. So the identical figures represent very different experimental conditions.

Schegelskaya also points out that Figure 4, a monochrome micrograph in the patent, is identical to a colour micrograph that she had published in the Ukrainian Neurosurgical Journal in 2006.

Bone-marrow cells can differentiate into only bone, fat or cartilage cells. The idea that they can be forced to turn into other cell types is the basis of the claimed therapeutic potential in Vannoni's patent.

“In fact no-one has ever been able to convincingly show that bone-marrow cells can be converted into nerve cells,” says Elena Cattaneo, a stem-cell researcher who studies Huntington's disease at the University of Milan, Italy.

Vannoni, along with other proponents of bone-marrow stromal-cell therapy, says that the cells in his treatment may work by homing in on any damaged tissue and reducing inflammation or promoting blood-vessel growth there.

Last year, the US Patent Office issued a ‘pre-final’ rejection of Vannoni's patent — one that allows re-submission, although Vannoni has not yet resubmitted. The rejection noted that the application included insufficient details on methodology, that differentiation was unlikely to occur during the very short incubation time described, and that the appearance of nerve-like cells in the culture is likely to “reflect cytotoxic changes”.

The government-sponsored Italian clinical trial was intended to begin on 1 July, but is now being delayed because Vannoni has three times postponed commitments to reveal his method to the government-appointed committee that will prepare the trial’s details.

That committee includes representatives from AIFA, the Italian health ministry and various scientific experts. It is led by the Superior Health Institute in Rome, Italy’s leading biomedical-research body. The institute's president, Fabrizio Oleari, declined to comment.

Nature made repeated attempts to contact Vannoni by e-mail and telephone for comment, since last Wednesday, 26 June, but received no response. The Stamina Foundation did not respond to emails.

Irving Weissman, director of the Stanford Institute for Stem Cell Biology and Regenerative Medicine in California, says that the Italian government would be unwise to support a trial with so little evidence of efficacy.