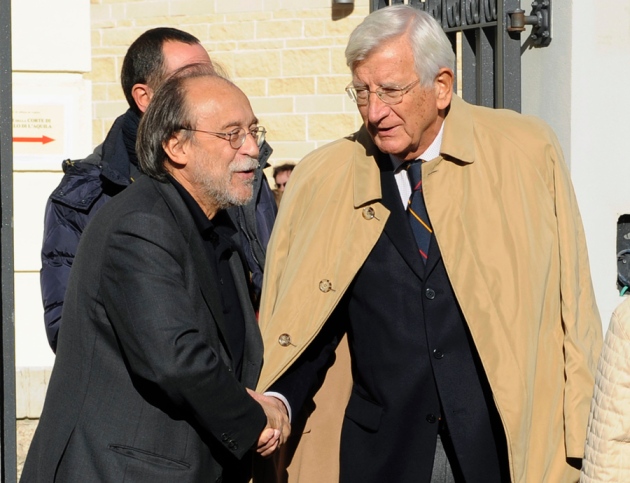 Bernardo De Bernardinis (left) and Claudio Eva, two of the defendants in the L'Aquila trial, on 31 October.

Six seismologists accused of misleading the public about the risk of an earthquake in Italy were cleared of manslaughter on 10 November. An appeals court overturned their six-year prison sentences and reduced to two years the sentence for a government official who had been convicted with them.

The magnitude-6.3 earthquake struck the historic town of L’Aquila in the early hours of 6 April 2009, killing more than 300 people.

The finding by a three-judge appeals court prompted many L’Aquila citizens who were waiting outside the courtroom to react with rage, shouting “shame” and saying that the Italian state had just acquitted itself, local media reported. But it comes as a relief to scientists around the world who had been following the unprecedented case with alarm.

“We don’t want to have to be worried about the possibility of being prosecuted if we give advice on earthquakes,” says seismologist Ian Main of the University of Edinburgh, UK. “That would discourage giving honest opinion.”

The defendants themselves have mixed feelings. Giulio Selvaggi, former director of the National Earthquake Centre in Rome, says that although he is happy to be acquitted, “there is nothing to celebrate — because the pain of the people of L’Aquila remains”.

The scientists had ended up in court as a consequence of botched communication in a highly stressed environment. In the months before the major earthquake struck, the region around L’Aquila had been subject to frequent, mostly low-magnitude tremors, known as seismic swarms. Residents were confused and increasingly alarmed by public statements made by a local amateur earthquake predictor, who said that he had evidence of an impending quake — although geologists dismissed his methods as unsound.

A commission of experts met on 31 March 2009 to assess the scientific evidence and advise the government. According to the prosecution, a press conference after that meeting — attended by the acting president of the commission, volcanologist Franco Barberi of the University of Rome ‘Roma Tre’, and by government official Bernardo De Bernardinis, then deputy director of the Italian Civil Protection Department — conveyed a reassuring message that a major earthquake was not on the cards.

Moreover, in a television interview recorded shortly before the meeting but aired after it, De Bernardinis, who is now president of the Institute for Environmental Research and Protection in Rome, said that “the scientific community tells me there is no danger because there is an ongoing discharge of energy” during the seismic swarms.

As a consequence, according to the prosecution, when the earthquake struck on 6 April, 29 people chose to stay indoors instead of stepping outside as they otherwise would have done, and died as their homes collapsed. All seven members of the expert commission were found guilty of manslaughter in October 2012, after a 13-month trial that transfixed the international scientific community. (A Nature editorial criticized that verdict.)

In addition to De Bernardinis, Selvaggi and Barberi, the other defendants were Enzo Boschi, former president of the National Institute of Geophysics and Volcanology in Rome; Claudio Eva, an Earth physicist at the University of Genoa; Mauro Dolce, head of the seismic-risk office of the Civil Protection Department in Rome; and Gian Michele Calvi, director of the European Centre for Training and Research in Earthquake Engineering in Pavia.

The appeal ruling was the result of a 30-day trial that started on 10 October in the L’Aquila courtroom, before a three-judge court. Over the course of six hearings before the appellate court in L’Aquila, the scientists’ attorneys argued that no clear causal link had been proved between the meeting and the behaviour of the people of L’Aquila. They also argued that the scientists could not be held accountable for De Bernardinis’s reassuring statements, and that the seismologists’ scientific opinions were ultimately correct.

“The only useful thing that can protect us from earthquakes is the seismic hazard map of a country,” said Selvaggi in a spontaneous statement he made during the final hearing. “We showed a map where L’Aquila is purple, which means the highest hazard. That is what I said on 31 March 2009, and I would say the same thing today.”

The reasoning behind the verdict is not yet known, and the judges can take up to three months to publish it. Selvaggi says that the appeals judges agreed that the scientists had broken no law. But it is not clear why De Bernardinis was considered differently. He was acquitted of the manslaughter charges in 16 cases, but not for the other 13.

Public prosecutor Romolo Como told the press that he had expected the judges to reduce the sentences, but not to “put all the blame on De Bernardinis and the civil protection”.

The ruling of the appeals judge can still be overturned. Lawyers for the families of the deceased have announced that they will challenge the ruling in the Supreme Court of Cassation in Rome, the country’s court of last resort. That court could invalidate the findings and call for a retrial.