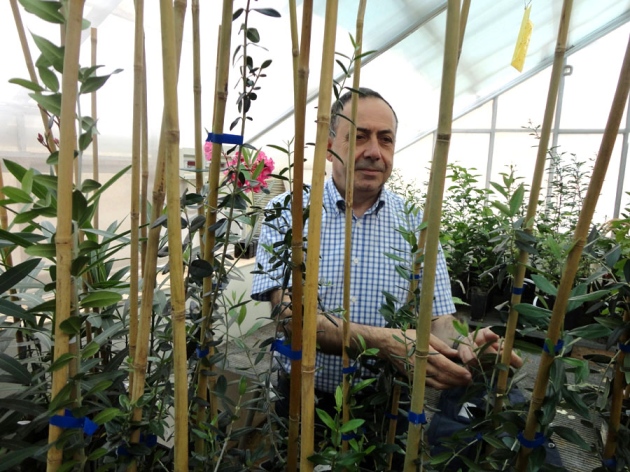 They did not expect to be hailed as heroes, say the scientists tasked with researching a deadly pathogen that is ravaging olive groves in Puglia, southern Italy. But they certainly did not predict that they would end up feeling like villains.

In the past year, plant scientists at various institutes in Bari, the capital of the Puglia region, have seen their work and their motivations criticized by local campaigners. Most recently, they have been subject to a police investigation about whether they are responsible for the introduction of the bacterium, Xylella fastidiosa, into Puglia, or for allowing its subsequent spread.

Police have called in several researchers involved in Xylella research for questioning and confiscated computers and documents from scientific institutes.

“We’d just like to be left to do our work without this suspicion and this stress,” says Donato Boscia, head of the Bari unit of the CNR Institute for Sustainable Plant Protection (IPSP), whom police questioned in April.

“The scientists in Puglia working on the Xylella outbreak have been working non-stop for two years,” adds Rodrigo Almeida, a Xylella expert at the University of California, Berkeley. “Their reward has been to get attacked constantly — I just can’t imagine how this would feel.”

Xylella is endemic in parts of the Americas, including Costa Rica, Brazil and California, but was not previously found in Europe. That changed in October 2013, when scientists at the IPSP and the University of Bari identified1 the bacterium as the cause of an unusual disease outbreak in olive trees. The outbreak immediately became subject to European Union (EU) regulations to limit its spread, and regional scientists began a systematic effort to understand the disease and contain it: the scientists went on to show that the bacterium was being carried by the spittlebug insect2.

From the start, farmers and environmentalists in Italy objected to containment measures, which involved uprooting trees and spraying the groves with pesticides. But trouble for the Puglian scientists began in April 2014, when individuals told police that they suspected that the epidemic was caused by bacteria that scientists had brought in from California for a European training course on Xylella at the Mediterranean Agronomic Institute of Bari (IAMB) in 2010. 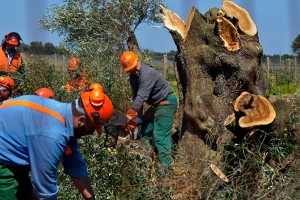 Workers in southern Italy cut down an olive tree infected with the deadly Xylella fastidiosa bacteria.

Scientists say that this suggestion is ludicrous because the Puglia strain is different from the strains used at the workshop; the widely accepted theory is that the infection was imported with ornamental plants from Costa Rica, where the endemic Xylella strain matches the Puglia strain.

However, the complaints spawned a much broader investigation by public prosecutors, including what role scientists may have had in the epidemic. On 4 May, police confiscated computers and documents from the University of Bari and the IPSP, as well as documents from the Centre for Agricultural Research Basile Caramia in Locorotondo, Puglia. Two weeks later, police also seized documents from the Italian ministry of agriculture in Rome. The IAMB has voluntarily passed documents to police.

The prosecutors declined Nature’s request for comment. But in March, one of them, Elsa Valeria Mignone, implied in an interview with Famiglia Cristiana magazine that they are looking into theories that the bacterium may have been deliberately introduced into the area, or became entrenched because agricultural scientists failed to monitor the region properly, either deliberately or through neglect. (Mignone also told the magazine that she was concerned about the possible corrupting influence of businesses, such as solar-energy companies, which might stand to gain from the clearing of olive groves.)

On 12 May, the Italian Association of Scientific Societies in Agriculture (AISSA), which represents 4,000 scientists in Italy, published a public letter defending the Puglian scientists and their work. “The claims do not have a scientific basis — that’s what has shocked the scientific community,” says Vincenzo Gerbi, AISSA president.

Puglian scientists have had to contend with public criticism too. Several popular blogs devoted to the Xylella emergency have cast doubt on scientists' ways of working and their results — saying, for example, that a remedy exists but is being suppressed. And Peacelink, an Italian non-governmental organization, wrote to the EU health commissioner in March saying that Xylella had not been proved to be the source of the outbreak and that the deaths were instead due to a fungus that could be eliminated without destroying trees. An expert panel of the European Food Safety Authority debunked these suggestions in a report published in April.

“It’s frustrating to hear all these complaints when you think you are doing a public service,” says Anna Maria D’Onghia, head of the pest-management division at the IAMB, who has been questioned by police. “We are always being attacked for doing too little, or the wrong things.”

Boscia says that the “attempts to delegitimize the results of scientific research” have been worse than the police investigations. But it is not all bad news for Puglian scientists. On 27 May, the regional government announced a €2-million (US$2.2-million) fund for projects that might aid the diagnosis, epidemiology and monitoring of the bacterium. It said that a ‘containment area’ in the province of Lecce — where the bacterium is now endemic, making complete eradication impossible — will be used as an open-air Xylella laboratory. National and European research agencies have also promised money, says Boscia. “The outdoor laboratory would be perfect for all of us — and also allow critics to put their own theories to the test.”