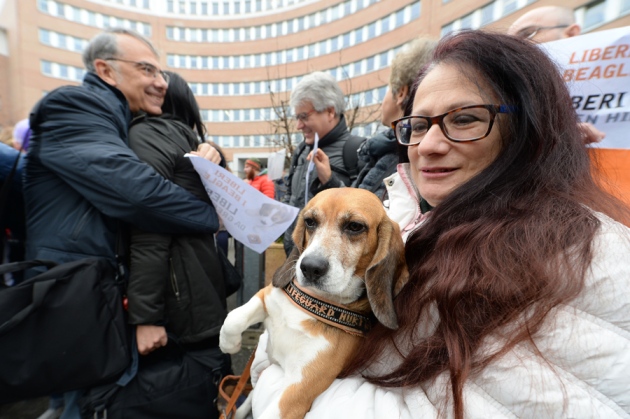 Animal-rights activists cheered outside the tribunal building in Brescia, Italy.

A criminal court in the northern Italian city of Brescia has handed down jail sentences to three employees of a company that breeds beagle dogs for scientific research. The three have been charged with cruelty to animals in their care, and with unjustifiably putting down some of the dogs. The court found a fourth defendant innocent.

Roberto Bravi, director of the Green Hill facility in Montichiari near Brescia — which belongs to the US-based animal-breeding company Marshall BioResources — was given a one-year jail sentence. Renzo Graziosi, a veterinary surgeon at the facility, and Ghislaine Rondot, who manages Marshall’s activities in Europe, each received one and a half years.

The judgement was announced on 23 January, but the reasoning behind the verdict will not be made known for another two months.

Italy's Anti-Vivisection League (LAV) proclaimed the rulings a major victory, but said that the sentences were too light. Pro-research groups, by contrast, expressed surprise and concern. Dario Padovan, president of the scientific-research defense group Pro-Test Italia, which has been following the court case closely, says that he had expected the defendants to win. “We were shocked,” he says. “It is another attack on Italian biomedical research, which is becoming increasingly vulnerable.”

Dogs are used in the testing of new drugs and in some types of basic biomedical research, particularly cardiovascular and diabetes studies. But they make up less than 0.25% of the animals used for scientific purposes in the European Union, according to 2011 statistics.

The Green Hill facility was temporarily closed in 2012 after the LAV and Legambiente, an organization that campaigns for the environment and cultural heritage, made allegations of animal mistreatment. A local court allowed the activist groups immediately to distribute the animals to foster homes, and an investigation began.

In May 2013, the Brescia court declared Green Hill innocent of all charges. But a week later, public prosecutors brought the same charges against four individuals.

The three who were convicted will be able to appeal. If the sentences are confirmed, however, the defendants will be unlikely to serve jail time because in Italy sentences of less than three years are generally converted to fines or to a probation period.