Israel has just nudged ahead of South Korea as the world’s most research-intensive economy, according to figures released on 7 February by the Paris-based Organisation for Economic Co-operation and Development (OECD).

Last year, the OECD reported that South Korea was opening up a clear lead — but its latest data, which reveal 2015 investments and make revisions to earlier years, suggest that the two countries are still neck and neck. In 2015, Israel invested 4.25% of its gross domestic product (GDP) in research and development (R&D), marginally more than South Korea, which dipped to 4.23%. 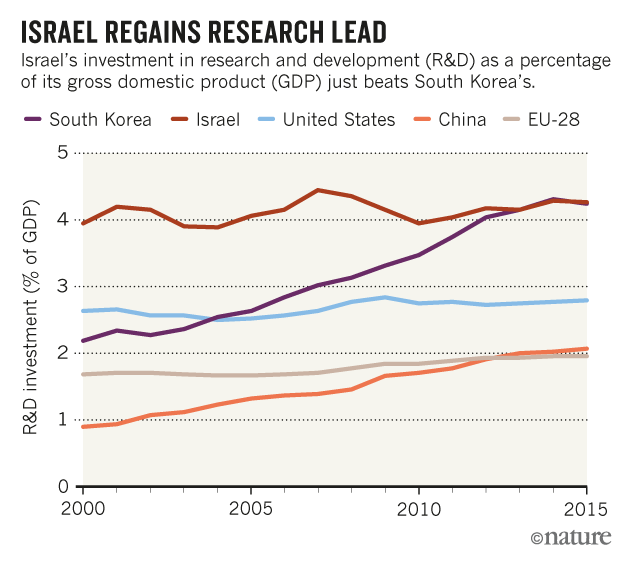 In both countries, industry accounts for much R&D spending. When it comes to the intensity given to “basic” research — which the OECD defines as work undertaken primarily to acquire new knowledge without any particular application in view — South Korea holds a clear lead, with 0.73% of its economy invested in the practice, a larger proportion than anywhere else in the world. (Israel, with 0.39% investment in 2014, is ninth on this measure.)

In OECD nations (which include Japan, the United States and Germany), the balance between government- and industry-financed R&D is slowly shifting. The fraction of R&D funded by domestic governments has been falling steadily since 2010, the OECD shows, dropping from 31% to 27% over 5 years. Industry-financed investment, which had dipped during the global financial crisis beginning in 2008, is back up to around 61% — aided by rising tax incentives for business R&D. Separately, cross-border research funding — not accounted for in the government and industry financing figures — is also on the rise.