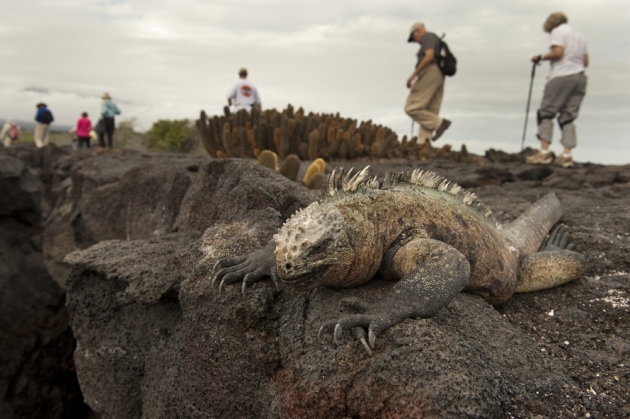 A marine iguana (Amblyrhynchus cristatus) at the Galapagos Islands National Park rests calmly as tourists walk by — a behaviour that may have evolved because of a lack of predators.

When Charles Darwin visited the Galapagos Islands, he noted that many of its animal inhabitants were so unafraid of people that “a gun is here almost superfluous”. He swatted birds with his hat, pulled the tails of iguanas and sat on giant tortoises.

These antics fuelled his famous idea that animals become tame when they live on remote, predator-free islands. Now, William Cooper Jr of Indiana University–Purdue University in Fort Wayne has tested Darwin's hypothesis on 66 species of lizards from around the world and found that island dwellers tended to be more docile than their continental relatives — the strongest evidence yet for this classic idea. The results are published this week in Proceedings of the Royal Society B1.

Several studies and unpublished reports have shown that particular species are more approachable on islands where there are fewer predators, or quicker to flee on islands that contain introduced hunters such as feral cats. But despite this largely anecdotal evidence for island tameness, “no one has ever established that it’s a general phenomenon in any group”, says Cooper. “We showed that for a large prey group — lizards — there really is a significant decline in wariness on islands.”

Taming of the few

“Island tameness is an old idea, but there have been few tests of it,” says Dan Blumstein, a behavioural biologist at the University of California, Los Angeles. “This is a needed paper that convincingly shows some of the drivers of island tameness in lizards.”

Cooper and his colleagues scoured past studies and collated data on the distance at which lizards start to flee when approached by a researcher. They took a conservative approach, discarding studies in which researchers had pointed at the lizards, walked towards the animals faster or slower than a particular fixed speed, or studied populations that were habituated to humans.

Cooper and his team ended up with data for 66 species, from the Eurasian common lizard (Zootoca vivipara) to the Galapagos marine iguana (Amblyrhynchus cristatus). The results clearly showed that humans can get closer to island-dwelling lizards than to mainland ones, and that lizards become more approachable on islands that are farther from the mainland.

Island ecology is so important that it overrides any effect of evolutionary history, Cooper and his co-authors say. They also showed that even closely related lizard species have different escape behaviours depending on where they live, and that their evolutionary relationships were mostly irrelevant.

The results do not explain why island lizards are tamer than those on the mainland, although the relative lack of island predators is the most likely reason. Animals with skittish dispositions can needlessly abandon valuable resources, and natural selection would be expected to weed out such responses if predators are rare or absent.

Cooper wants to test this idea, but says that it is hard to get decent data on the numbers, densities and types of predators on different islands.