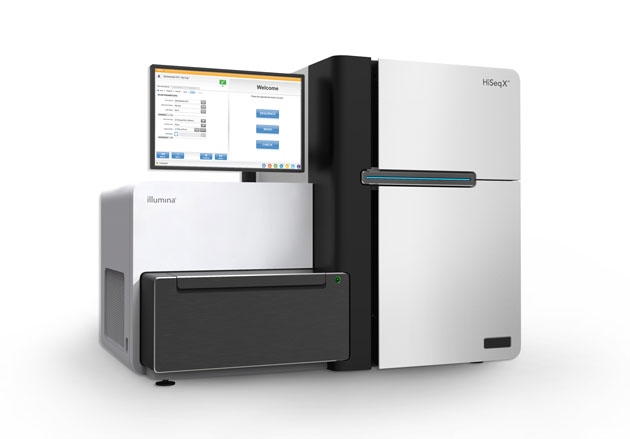 The HiSeq X Ten is composed of ten HiSeq X machines, and sells for at least $10 million.

The US$1,000 genome is here. Or so says sequencing-technology company Illumina, based in San Diego, California. At a healthcare investors' conference on 14 January, Illumina CEO Jay Flatley announced that his company will begin producing a new system this year called the HiSeq X Ten, one that can deliver “full coverage human genomes for less than $1,000”. Here Nature assesses the claim.

We've heard claims of the $1,000 genome before. Aren't we there already?

Other companies — such as Life Technologies, in Carlsbad, California, maker of the Ion Torrent sequencing platforms, and UK-based Oxford Nanopore — have said before that they will sell technologies capable of sequencing genomes for $1,000 or less. Neither technology is there yet, and pushing the cost of sequencing under $1,000 has proven to be a tough nut to crack.

The first sequenced human genome cost nearly $3 billion, but as sequencing costs have dropped substantially, doctors have begun using some patients' genome sequences to improve their care. But scientists think that they will need to sequence hundreds of thousands or even millions of people to truly understand how genes influence disease so that better drugs and treatments can be developed. They say that $1,000 genomes are needed to enable the huge sequencing studies that could lead to breakthroughs in personalized medicine.

What has Illumina said the HiSeq X Ten will do?

The HiSeq X is capable of producing up to 1.8 terabases of data — 16 human genomes' worth — per three-day run. Illumina says that each HiSeq X Ten will therefore be capable of sequencing 18,000 human genomes per year. Each genome will be sequenced to the gold standard of 30x, which means that each base will be read by the machine an average of thirty times. And these are whole human genomes we're talking about here — not solely the protein-coding regions, or exomes.

How big a deal is this?

Some genomics researchers say that it is a milestone. “It is a major human accomplishment on par with the development of the telescope or the microprocessor,” says quantitative biologist Michael Schatz of Cold Spring Harbor Laboratory in New York. “If there was any doubt to if genomics would ever be able to reach the everyday man, at this price point and efficiencies it is absolute certainty.”

So, genomes for everyone, right?

Well, no. The HiSeq X Ten system is available only as a combination of at least 10 HiSeq X systems, for a total cost of at least $10 million. And few customers have the volume of samples necessary to make that investment worthwhile. “It's a good deal if you can play in this game,” says Chad Nusbaum, co-director of the sequencing program at The Broad Institute of Massachusetts Institute of Technology and Harvard in Cambridge, Massachusetts, one of the world's sequencing heavyweights and one of the three customers already signed up for the HiSeq X Ten. “It's like the high-stakes poker table: if  you're playing $200 a chip, people who can't afford those chips don't care.”

So why should we believe that Illumina will deliver?

How did they do it?

Christian Henry, a senior vice president at Illumina, said that the HiSeq X contains four main improvements to Illumina's existing HiSeq 2500 system. The workhorse of the HiSeq 2500 is the flow cell, which houses hundreds of millions to billions of individual DNA templates copied from a sample to be sequenced. The DNA in these templates is labelledusing flourescent dyes that are photographed by a camera, and the resulting images are analysed to detect the identity of each base.

But while the HiSeq 2500 contains a random smattering of DNA templates all across the flow cell, the HiSeq X contains an ordered array of 'nanowells' to house these DNA templates. This means that the templates can be packed in more densely on the flow cell, enabling the machine to read data out more data per run of the machine. Illumina has also figured out a way to enhance clustering of identical DNA templates in most of the nanowells, further boosting speed. Finally, the company added a faster camera and new polymerase enzymes to carry out faster sequencing reactions on the DNA templates.

How will this affect the sequencing market?

The HiSeq X Ten seems squarely aimed at undermining the Chinese sequencing powerhouse BGI-Shenzhen, formerly the Beijing Genomics Institute, which is trying to establish itself as a sequencing service provider and which last year bought the company Complete Genomics with an eye towards providing outsourced genome sequences. Nusbaum estimates that the genomes produced by BGI will cost customers in the low thousands of dollars.

Flatley also announced yesterday a new desktop sequencer, the NextSeq 500. It costs $250,000 — comparable to Ion Torrent's desktop sequencer, the Ion Proton — and seems designed to compete with it. But so far Illumina does not have a riposte to technology promised from Oxford Nanopore, which if it lives up to its billing will be fast and cheap not just for human-genome sequencing but also for other applications, such as sequencing microbes in metagenomics. So although the new machines may consolidate Illumina's hold on the mid to high ends of the sequencing market, scientists are still hungry for a machine that can do fast, cheap sequencing on everything — and for everyone.