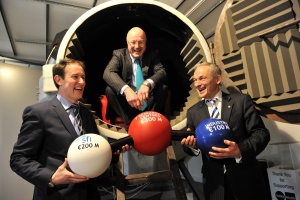 The Irish government has outlined details of a €300-million (US$392-million) package of research funding that will establish seven new hubs through which industry will collaborate with academic researchers.

Roughly one-third of the funding for the new centres, which are to run for six years, is expected to come from around 150 industry partners through cash and in-kind contributions.

“This is the largest single research announcement to date in Ireland in terms of people and projects,” says Mark Ferguson, director general of Science Foundation Ireland (SFI), which will distribute the state funding. “As a small country we cannot do everything well, and these are areas where we see Ireland has the capability to build scale and excellence and have an economic and societal impact.”

Many of the new centres — including Ireland’s Big Data and Analytics Research Centre (INSIGHT) — bring pre-existing SFI centres together. “INSIGHT is all about the idea that nearly everything we are doing is creating a data record that is stored somewhere,” says the centre's lead principal investigator, Barry Smyth, who is based at University College Dublin. “There are huge opportunities to analyse the data so we can make better decisions about where to live, what food to eat, where to send our kids to school and help governments make better decisions about policy and infrastructure.”

Other groupings include the Irish Centre for Fetal and Neonatal Translational Research (INFANT), led by University College Cork, which will focus on perinatal issues such as pre-term birth, neonatal brain seizures and remote monitoring of maternal blood pressure.

Some proposals were shortlisted for the funding but were unsuccessful. "Our science was rated as outstanding, but sadly it appears that there wasn't enough money to fund everything," says immunologist Luke O'Neill, academic head of the Trinity Biomedical Sciences Institute at Trinity College Dublin, who was involved in the shortlisted consortium on immunology.

The SFI is supporting immunology under other funding mechanisms, according to O'Neill, and he hopes that the new initiative's focus on economic impact will not lead the agency to neglect basic science. “If you lessen funding for the really basic stuff — the research where scientists are asking questions without the need to map it onto creating jobs or short-term revenue — then what happens later?” he asks. “The well of discovery dries up and that then no longer feeds the more applied research over time. The best scientists are trained in labs where fundamental science is being carried out,” he says.

Ferguson says that he does not believe that establishing the new centres will adversely affect funding of basic research. “I don’t think you can say basic science is being abandoned,” he says. “I think what you can say is that for the first time there is strategic alignment in Ireland — we are moving from capacity building through to alignment of the research.”

One of the challenges now will be to coordinate existing funding mechanisms such as the SFI's Principal Investigator Awards with the new centres, according to Diarmuid O’Brien, executive director of the Centre for Research on Adaptive Nanostructures and Nanodevices in Dublin. The centre is involved in one of the new hubs, the Advanced Materials and BioEngineering Research Centre, or AMBER, which will develop biomaterials for novel medical devices.

“Investigators need to be able to generate new ideas by themselves; then the centre brings them into collaborative environments,” says O’Brien. "If you don’t connect the [Principal Investigator] Awards with the centre you are going to lose the life-blood of discovery.”