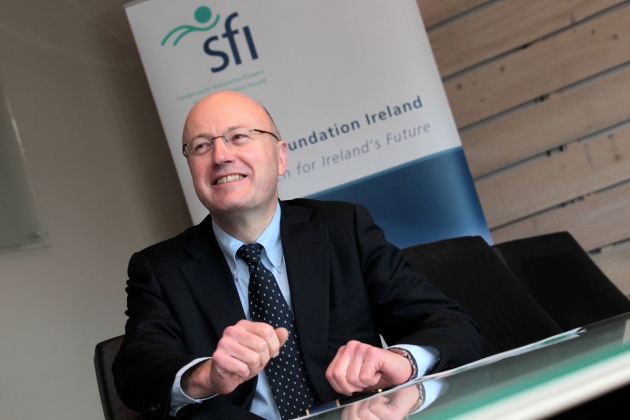 Researchers in Ireland, one of the European economies hit hardest by the recession, fear that they have lost a strong defender of science. When Ireland embraced austerity after the financial crisis struck in 2008, the country’s chief science adviser (CSA) helped to persuade the government to spare science, and urged it not to neglect longer-term investments in research capacity. Now, however, the government has abolished the CSA’s office and transferred its responsibilities to the head of Science Foundation Ireland (SFI), the country’s largest research-funding agency.

The last CSA, Patrick Cunningham, an internationally renowned animal geneticist at Trinity College Dublin, ended his term in August. On 26 October, the government announced that the CSA’s role would be taken over by Mark Ferguson, director general of SFI, and that the CSA’s office — with just two support staff seconded from elsewhere — would be axed as part of sweeping public-service reforms. The move has alarmed researchers, who are sceptical that Ferguson can devote adequate time to the role, given his demanding post at SFI. And they question whether the head of a national research-funding agency, charged with implementing government policy, can be seen to provide truly independent advice. “Many of us are mesmerized by this. It’s bewildering and illogical,” says Peter Gallagher, an astrophysicist at Trinity College. “It’s a complete conflict of interest.”

There is “self-evidently” a potential for conflicts of interest, agrees Cunningham, not least because SFI is one of many competing interests in the Irish research and funding space. “I have great respect for Mark’s credentials, capacity and personality, and I’m sure he will act with the greatest integrity,” he says. “It’s more a problem of outside perception. That’s a real challenge to somebody who has to be seen to act as an independent adviser.”

Ferguson, who has led SFI since January, acknowledges the potential for conflicts of interest. Ideally, the roles of the CSA and head of SFI should be separate, he says, but under the current economic conditions he found the government’s plan to be “perfectly reasonable”. He adds that any conflict would be mitigated by his intention to act mainly as an arms-length facilitator in generating opinions and advice. As to finding the time, he says that he will “just have to work harder”. 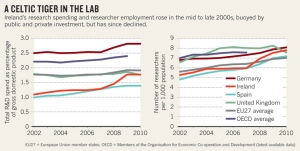 Researchers say that science in Ireland needs more of the kind of analysis and advice that Cunningham provided. R&D funding from all sources rose significantly in the mid to late 2000s (see ‘A Celtic tiger in the lab’), and although government research spending declined in 2010 and 2011 to pre-2007 levels, it has so far escaped the savage cuts that have hit other sectors of public spending in Ireland. But with Irish public finances under intense pressure, bigger cuts in science spending may be inevitable in the coming years. “There’s a very big job ahead to defend the science budget,” says David McConnell, a geneticist at Trinity College. “The financial pressures on Ireland are ferocious.”

In March, the government also announced that it would refocus public research spending on just 14 areas with the greatest potential for creating jobs and wealth. Ferguson has prominently supported the move, and says that it will bring more “balance” to the foundation’s portfolio, which he believes has been too skewed towards blue-skies research at the expense of targeted research.

Many Irish researchers accept that at a time of economic crisis the government has to prioritize research spending to some extent. “We have to show that researchers are collectively as concerned as anyone else about the huge crisis that we face nationally,” says McConnell, arguing that it is up to researchers to put forward good proposals within the priority headings. But some worry for the future of fields that don’t fit these pigeonholes. “This is a death knell for many of us in frontier or basic research, such as pure mathematics, evolutionary biology, astrophysics or particle physics,” laments Gallagher. Many also argue that the government is focusing too much on illusory short-term pay-offs from research. Long-term investments, such as building research infrastructure and training the best scientists, are crucial to attract the international high-tech investments that remain Ireland’s main driver of growth, says Cunningham. Similar investments in education and research underpinned the country’s economic boom from the mid-1990s until 2007.

Researchers say that the research-prioritization exercise is itself one example of why an independent CSA is preferable, arguing that the head of SFI can hardly be asked to assess a policy that his agency is promoting. McConnell wonders why the government didn’t instead draw upon the pool of recently retired leading Irish researchers, many of whom, he says, would have been “honoured” to do the job with a minimum of remuneration and support. As another scientist comments: “Closing the office entirely sends negative signals to our international colleagues, who will ask the question: ‘Just how serious is Ireland about its science?’”