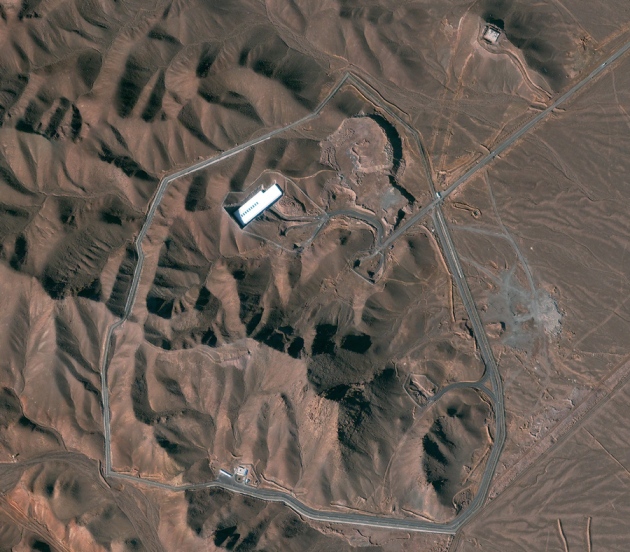 Iran’s Fordow nuclear-enrichment plant could be converted into an international physics laboratory.

The preliminary deal agreed between six world powers and Iran over its nuclear programme has been hailed as an opportunity to end years of global tension, prevent a nuclear arms race in the Middle East and ease sanctions that have crippled Iran’s economy. Iranian science may also be a winner.

Negotiators must still resolve many outstanding issues before the 30 June deadline for a formal, written deal (see ‘Challenges to a formal deal’). But researchers in and outside Iran are cautiously optimistic about an intriguing spin-off of the agreement — a proposal to convert the Fordow uranium-enrichment plant into an international physics laboratory, as well as opportunities for collaborations that will arise if sanctions are eased.

“The option that Fordow may be transferred into a physics-research facility is certainly exciting to the physics community of Iran,” says Shahin Rouhani, a physicist at the Institute for Research in Fundamental Sciences (IPM) in Tehran and president of the Physics Society of Iran. “What will actually happen is, of course, dependent on the final agreement in a few months’ time, and the exact infrastructure available in Fordow,” he adds.

Buried beneath a mountain, the Fordow facility concerns the United States and its allies because it would be difficult to destroy, so the proposal to turn it into a lab seems above all a diplomatic device. “I think that this is primarily a way to bridge over the Ayatollah’s requirement that no Iranian nuclear facility be shut down and the US requirement that enrichment of uranium stop there,” says Frank von Hippel, a nuclear-weapons and non-proliferation physicist at Princeton University in New Jersey.

According to the proposed deal, some of the uranium-enrichment centrifuges at the Fordow site would be repurposed to produce isotopes such as molybdenum-99, which is widely required for medical imaging (see go.nature.com/jafnpt). Rüdiger Voss, head of inter­national relations at CERN, Europe’s particle-physics laboratory near Geneva, Switzerland, says that such a capability could help to stem a global shortage of these isotopes.

Challenges to a formal deal

US and Soviet leaders relied on physicists to work out nuclear-weapons reductions and verification procedures during the cold war. Similarly, negotiators now working on a formal deal on Iran’s nuclear programme are looking to scientists to provide confidence in its technical underpinnings. Here are three nuclear capabilities that a final agreement will need to address.

BREAKOUT Central to the deal is the concern that Iran could quickly divert its nuclear programme — which it claims is for peaceful purposes — to produce the highly enriched uranium or weapons-grade plutonium needed to build a bomb, an event known as ‘breakout’. The preliminary deal requires that Iran reduce the number of operating centrifuges from 19,000 to 5,060 and its stockpile of low-enriched uranium from 10,000 kilograms to 300 kg. Under this scenario, it would take at least a year after a breakout to produce the uranium needed for a bomb, enough time for intervention. The framework agreement also stipulates that the core of a heavy-water nuclear reactor at Arak be replaced with one that generates less plutonium in its spent fuel — and that all spent fuel be sent out of the country.

SNEAK-OUT Under the framework agreement, for the next 25 years the International Atomic Energy Agency (IAEA), headquartered in Vienna, would be given unprecedented powers to inspect any part of Iran’s nuclear-fuel cycle. It would also have the right to investigate the possibility of ‘sneak-out’ — undeclared sites carrying out uranium enrichment or other activities that could result in nuclear weapons. The agency’s inspections would use satellite imagery, searches for equipment and environmental sampling to check whether highly enriched uranium has been used at a site. But the agreement is currently much less detailed when it comes to sneak-out than for breakout, and Iran has in the past hidden enrichment plants from the IAEA.

WEAPONS RESEARCH Perhaps the thorniest issue is military nuclear research. If inspectors had access to the nation’s Parchin military site, where work on the development of nuclear weapons is alleged to have taken place, they could look for evidence of the testing of nuclear-weapons components. But the deal as laid out does not touch on what powers the IAEA would have to inspect military sites, and, unsurprisingly, Iran has in the past refused the IAEA access to Parchin. Satellite images suggest that Iran has tried to conceal previous nuclear-weapons research at the sitefrom any future IAEA inspection.

Other parts of the underground site would house experimental physics facilities; the usefulness of this would depend heavily on the nature of the facilities, which are vague right now, says Voss. Physicist Ernest Moniz, the US energy secretary who is the nation’s lead scientific negotiator on the agreement, has mentioned the possibility of installing a particle accelerator there. Iranian physicists are already on the case too, says Reza Mansouri, an astronomer at the IPM and a former deputy science minister. The Physics Society of Iran intends to write to politicians to ask to be involved in the choice of any future projects, he says, and Rouhani plans for the society to set up a working group to examine the possibilities for exploiting Fordow. He cites the construction of a neutrino detector as a possibility; Mansouri suggests research on cosmic rays.

Iran has a vibrant physics community and is already home to facilities such as the Iranian Light Source Facility in Qazvin, northwest of Tehran, which provides intense beams of X-rays for research in many fields. Iranian physicists also have many international collaborators, for example through the country’s participation in experiments at CERN, and so are well poised to discuss any plans with colleagues abroad. “I can only be open to the initiative,” says Patrick Fassnacht, who is in charge of international relations with Iran at CERN.

The negotiations also include easing nuclear-related sanctions, which have affected Iran’s ability to do research and to collaborate with foreign scientists, says Hamid Javadi. He is a member of the council of the Iranian-American Physicists group, a body set up in 2007 to represent Iranian members of the American Physical Society. Foreign scientists often avoid contact with their Iranian peers for fear of falling foul of the tough sanction laws, he says. Iranian scientists wishing to travel abroad have also had difficulty obtaining visas.

Furthermore, the sanctions have made experimental equipment and journal subscriptions expensive for Iranian researchers, says Warren Pickett, a physicist at the University of California, Davis, who has promoted science diplomacy with Iran through visits (W. E. Pickett et al. Nature Phys. 10, 465–467; 2014), and whose university last year agreed to collaborate with Sharif University of Technology in Tehran. More perniciously, international tensions have often driven a wedge between foreign and Iranian researchers, he says: “When I described my visit to Iran, some colleagues would seem to roll their eyes in a ‘why would you go there?’ fashion.”

He adds: “Introducing a large country of 75 million people back into the international community would be a great breakthrough.”

Eased sanctions would free up Iran’s existing collaborations, too. “Life is not easy for our Iranian friends,” says Fassnacht. CERN itself has had to be careful not to inadvertently contravene sanctions when dealing with Iran, he says, such as working with people blacklisted for their links to the country’s nuclear programme. Swiss banks have also been reluctant to accept Iran’s payment of dues to CERN, although CERN finally found a bank willing to do so, he adds.

The SESAME synchrotron being built near Amman, Jordan, with a goal of promoting peace between Middle Eastern nations, as well as particle physics, has faced similar bank problems, says Christopher Llewellyn-Smith, director of energy research at the University of Oxford, UK, and president of the SESAME council. “It will be a real shot in the arm for SESAME, as it will allow Iran to start paying again and pay debts which have accumulated since sanctions began,” he says.

Even more broadly, the negotiations signal a readiness for dialogue. “It’s immensely important,” says Mansouri, “that Iran, the US and other countries have learnt to talk with each other with rationality.”

An earlier version of the story stated that Iran found a bank willing to accept its payment of dues to CERN. It was CERN, not Iran, that found the bank. In addition, the text implied that Iran is a full member of CERN — it is involved in specific projects at the lab. The text has been corrected to reflect this.