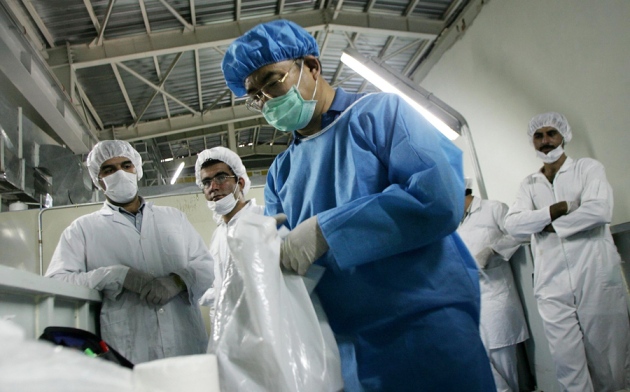 An inspector from the International Atomic Energy Agency works at the Isfahan Uranium Conversion Facilities in Iran back in 2005.

The nuclear agreement thrashed out between Iran and six world powers last week represents a landmark piece of diplomacy, with science at its heart.

The ‘framework’ deal is designed to ensure that Iran’s nuclear programme is used for peaceful means. In exchange, the country will obtain some relief from sanctions that have crippled its economy. The result of eight days of intense negotiation in Lausanne, Switzerland, the deal is still preliminary and does not exist in written form, though it has been outlined in a document released by the United States. On 6 April, 30 leading nuclear-security experts, mostly from the US, voiced support for the accord. However, crucial details and issues must still be resolved before 30 June, the deadline for reaching a final, written agreement.

Much as US and Soviet leaders relied on physicists to work out nuclear-weapons reductions and reliable verification procedures during the cold war, those negotiating the Iran deal are looking to scientists for confidence in its technical underpinnings. Here are three nuclear capabilities that a written agreement will need to address, ranked in increasing order of difficulty.

Driving last week’s negotiations was the long-standing concern that Iran could quickly divert its nuclear programme — which it claims is for civilian and peaceful purposes — to produce the highly enriched uranium or weapons-grade plutonium needed to build a bomb, a process known as ‘break-out’.

Complex calculations that take account of the number of centrifuges, the rate of uranium enrichment, the size of the existing enriched-uranium stockpiles and their level of enrichment are behind the stipulation in the preliminary deal that Iran reduce the number of operating centrifuges from 19,000 to 5,060 and its stockpile of low-enriched uranium from 10,000 kg to 300 kg (the rest of the stockpile must be blended down or sent overseas). This combination of figures means it would take Iran at least a year from breakout to produce enough fissile material for a bomb, leaving time for international intervention.

The framework deal also says that Fordow, one of Iran's two confirmed enrichment plants, which is located deep under a mountain, be barred from processing uranium altogether. On 6 April, Ernest Moniz, the US secretary of energy and a physicist, added that any centrifuges to be left at the plant would be repurposed to produce medical isotopes as part of an international centre that would also be dedicated to experimental physics research.

Enriched uranium is not Iran’s only pathway to an atomic bomb: a heavy-water nuclear reactor at Arak contains plutonium in its spent fuel — although it is thought that Iran does not yet have the means to separate out and purify the element. Under the framework agreement, the reactor core would be replaced with one that generates much less plutonium, with all spent fuel sent out of the country.

Assuming that these details can be formally agreed on, the next problem will be to ensure that Iran complies with the restrictions imposed on it.

Under the framework agreement, for the next 25 years the International Atomic Energy Agency (IAEA), headquartered in Vienna, would be given unprecedented powers to access and inspect at short notice any part of Iran’s fuel cycle, from uranium mines to reactors, and to continuously monitor enrichment facilities. Importantly, the agency would be given powers to investigate any undeclared sites suspected of carrying out uranium enrichment or other nuclear activities that could allow nuclear material to be secretly diverted to make nuclear weapons — a scenario known as ‘sneak-out’.

The agency’s inspections would include the use of satellite imagery, on-site searches for specialized equipment, analysing documents, interviewing people, and carrying out environmental sampling to check, for example, whether highly enriched uranium has been used at a site. The inspection team could also use ground-penetrating radar to search for hidden equipment.

The proposal is much less detailed when it comes to preventing sneak-out, and Iran has in the past repeatedly hidden enrichment plants and other nuclear facilities from the IAEA, and has often been uncooperative about inspections.

There is also the issue of how the IAEA would monitor Iran’s nuclear programme once restrictions on it are lifted, since the accord stipulates that restrictions on centrifuges must be binding for 10 years, those on the stockpile for 15 years and those on new heavy-water reactors for 15 years. Other signatories to the 1970 nuclear non-proliferation treaty, including Japan and Brazil, have large domestic enrichment programmes, which are subject to IAEA safeguards and inspections. The accord would postpone for more than a decade any decisions about what enrichment capacities Iran might ultimately be allowed.

Perhaps the thorniest issue left to be resolved is what military nuclear research Iran has carried out in the past and what, if any, might still be going on. Such research could include the testing of nuclear-weapons components such as detonators, the development of a nuclear payload for missiles, and modelling weapon behaviour.

On this, the preliminary deal is vague, stating only that: “Iran will implement an agreed set of measures to address the IAEA’s concerns regarding the Possible Military Dimensions (PMD) of its program.”

If inspectors had access to the Parchin site, where work on the development of nuclear weapons is alleged to have taken place, they could look for evidence of past military nuclear research. Such detective work relies heavily on scientific and technical expertise in nuclear-weapons engineering. Only with such expertise would it be possible to tell, for example, whether the details obtained of tests on missile payload ruled out any use other than for a nuclear weapon, or whether high-explosive testing of materials was related to trying to predict how a nuclear weapon design might perform.

But the deal as laid out does not touch on what powers the IAEA would have to inspect military sites, and Iran has previously refused the IAEA access to Parchin.

Complicating matters is evidence that Iran has tried to conceal previous nuclear-weapons-related research at the site from any eventual IAEA inspection. For example, in February, the Institute for Science and International Security, a non-profit, non-partisan nuclear watchdog based in Washington DC, published satellite images of the site showing extensive demolition and reconstruction and the disturbance of earth, suggesting that the country might have been trying to cover up evidence in the event of an inspection.