A goldfish swims inside an array of prisms that bend light to make it 'disappear'.

A fish swims into an enclosure and disappears, while the pondweed behind remains perfectly visible. A cat climbs into a glass box and vanishes, and again the scene behind the box remains visible through the glass. This latest addition to the science of invisibility cloaks is one of the simplest implementations so far, but there’s no denying its striking impact.

The ‘box of invisibility’ has been designed by a team of researchers at Zhejiang University in Hangzhou, China, led by Hongsheng Chen, and their coworkers. The box is basically a set of prisms made from high-quality optical glass that bend light around any object in the enclosure around which the prisms are arrayed, the researchers describe in a paper posted on the online repository arXiv1.

Chen and his coworker Bin Zheng first unveiled the principle last year with a six wedge-shaped prisms arranged to form a hexagon that could hide small objects5. The researchers now used a similar but larger hexagon of prisms placed in a fish tank. As a fish swims through the central hole, it disappears while the pondweed behind the cloak remains perfectly visible.

A second demonstration uses a square arrangement of eight prisms with a central cavity large enough for a cat to climb inside. The researchers project a movie through the cloak and onto a screen behind it. Seen from the front, parts of the cat vanish as it sits in the cavity or pokes its head inside, while the scene behind — a field of flowers, with a butterfly flitting between them — can be seen through the glass (see figure below and video at bottom). 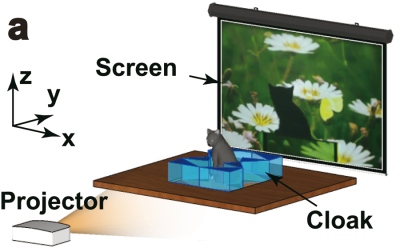 An arrangement of glass prisms routes light around the space inside the cloak, so that an observer sees the scene on the screen as if the cat were not there.

As well as being visible themselves, these cloaks only work for certain viewing directions. A sophisticated observer would also be able to measure that different rays of light have travelled different distances inside the device.

As such, the trick is arguably closer to ‘disappearances’ staged in Victorian music hall using arrangements of slanted mirrors than to the modern use of substances called metamaterials to achieve invisibility by guiding light rays in unnatural ways. These are materials made from arrays of electrically conducting components that interact with light so as to create exotic optical effects such as negative refractive index.

In principle, metamaterials can create ‘perfect’ cloaking — which makes the cloak itself invisible as well as its contents2. Metamaterials that work at the wavelengths of visible light are very hard to make, however. Chen’s coworker Baile Zhang of Nanyang Technological University in Singapore3, as well as John Pendry at Imperial College London4, and their coworkers have shown that a compromise of partial visible-light cloaking of macroscopic objects can be attained using blocks of transparent materials such as calcite crystal, in which light propagates at different speeds in different directions.

These partial cloaks will hide objects but remain visible themselves. “Everyone would like to have a cloak that hides big, real-world objects from visible light, but achieving this demands some compromises of the ideal theory”, Pendry explains.

He says that Chen and colleagues have now gone “further than most” with such compromises by abandoning any concern to preserve phase relationships in the transmitted light, Pendry says. “As a result the authors can report quite a large cloak that operates over most of the visible spectrum.”

Chen and colleagues write that such a simplification is warranted for many applications, for example in security and surveillance, where one might imagine hiding an observer in a glass compartment that looks empty.

A cat climbs inside a rectangular arrangement of prisms that form an invisibility cloak.