A prominent developer of drugs that use RNA interference (RNAi) has abandoned one of its leading candidates amid safety concerns — sending a fresh wave of worry through a field that has long struggled to bring treatments to market.

The news, released on 5 October, sent stock in Alnylam Pharmaceuticals of Cambridge, Massachusetts, plummeting by about 50%, reducing the value of the company by nearly US$3 billion in one day. 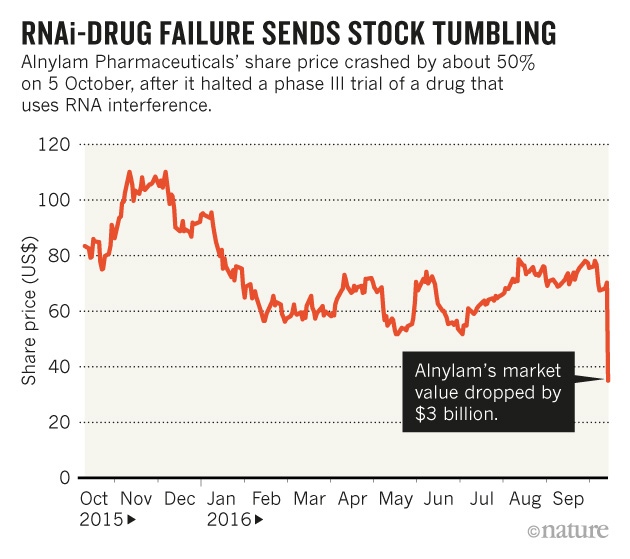 The scrapped experimental drug, called revusiran, was in advanced clinical trials in people with a rare and devastating disorder called ATTR-amyloidosis with cardiomyopathy, a condition that has no treatment and is often fatal within five years of diagnosis. It was one of Alnylam’s most mature drug candidates.

But investors are worried about more than just the loss of one experimental drug, says analyst Alan Carr of the investment bank Needham & Company in New York City. “They’re concerned that this safety signal may be an issue for the rest of the platform,” he says. “That’s why we’ve had such a strong reaction.”

Alnylam chief executive John Maraganore quickly responded to counter those fears. “It is important to emphasize that the discontinuation of revusiran does not affect any other Alnylam investigational RNAi therapeutic programme in development,” he said during a presentation to investors on 5 October.

Yet Maraganore’s assurances fell on investors who were already feeling skittish about biotechnology companies, says Carr. A biotechnology investment boom over the last four years pumped cash into the sector, but began to cool off late last year, he notes.

First discovered in nematode worms in the late 1990s, RNAi is the process in which small strands of RNA bind to the RNA that a cell uses to translate genes into proteins, thereby interfering with gene expression. Researchers have harnessed it to study gene function. Alnylam’s revusiran announcement came just three days after the field had celebrated the tenth anniversary of the 2006 Nobel Prize for Physiology or Medicine, which was awarded for the discovery of RNAi.

Although experts immediately saw medical potential in RNAi, drug developers have struggled to translate the technique into a therapy, and none has yet reached the clinic. In particular, they have wrestled with delivering RNA molecules — notoriously prone to degradation — safely to their target.

Alnylam has become a pioneer in that field, developing methods for shuttling RNAi around the body. The company’s lead compound, called patisiran, is also in late-stage clinical trials to treat another form of ATTR-amyloidosis. Data from that trial are expected to be released next year, and several other RNAi drug candidates are in early clinical testing.

Concerns about revusiran were first raised when several trial participants reported severe nerve pain. Alnylam called for a committee to review the clinical-trial data; it found that the nerve pain was not likely a result of the treatment. But it also discovered that more participants had died in the treatment arm than in the placebo arm of the trial.

On reviewing the data, Alnylam decided to scrap the programme altogether. A few days before the revusiran announcement, on 28 September, the firm had announced that it had dropped another drug candidate after early tests showed that it elevated liver enzymes — a possible sign of liver toxicity.

But a search through the company’s safety database — which contains data from more than 800 people treated with Alnylam’s RNAi drug candidates — has revealed no broader safety concerns, says Akshay Vaishnaw, Alynylam’s vice-president of research and development.

And revusiran, Carr notes, used an older technology to stabilize the RNA in the body. As a result, it required higher and more frequent doses than would many of Alnylam’s newer drug candidates.

“My view is that this reaction is overblown,” he says. “But at this point, I’m obviously in the minority.”