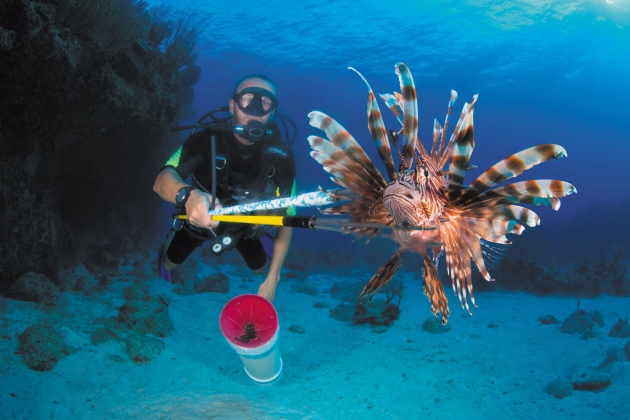 Stephanie Green plunged her hands, sheathed in thick black gloves, into a cooler full of lionfish. Skilfully avoiding its 18 venomous spines, she plucked one out and laid it on a table to record its length. Nearby, volunteers were chopping up the brown, red and white striped fish to make ceviche and passing the dish into the crowd.

As they nibbled on the food, teams of scuba divers milled around the scoring area. They checked out each other’s catches and argued over who would be taking home the more than US$3,500 worth of prizes from the 2013 lionfish hunting derby in Key Largo, Florida.

“At the check-in time it’s a mad rush, with teams coming in with coolers of fish, trying to beat the clock,” says Green, the chief scientist of the contest and a marine ecologist at Oregon State University in Corvallis. By the end of that day last September, Green and the other scorekeepers had counted 707 lionfish, from one smaller than a golf ball to one that stretched nearly two soccer balls long.

The hunting competition is part of an effort to tackle an invasive species that has been identified as one of the world’s greatest conservation issues1. Since lionfish (Pterois volitans) first appeared on the eastern seaboard of the United States in the 1980s, the voracious predators have gobbled up coral-reef fish from North Carolina to Venezuela. Officials responsible for protecting reefs have struggled to find ways to control populations, and managers are embracing these fishing contests in a handful of coastal communities.

The strategy is a bit of a gamble, given that competitions to catch other invasive species — such as pythons in Florida — have had limited success. But the data collected by Green show that even one-day contests can effectively knock down local populations. Her findings and those from other hunting efforts offer lessons on how a little bit of reward money — coupled with science and outreach — can help to keep invasive species in check. “We can’t control lionfish in the entire ocean, but derbies can have high impacts locally,” says James Morris, an ecologist with the US National Oceanic and Atmospheric Administration in Beaufort, North Carolina.

Like many invasions, the lionfish conquest started small. The fish are normally found in the western Pacific Ocean, Indian Ocean and Red Sea, where predators and competitors keep the populations under control. Genetic analysis2 suggests that roughly a dozen fish were first introduced off the Florida coast, either accidentally or intentionally released from aquariums. From there, the population exploded. Lionfish spawn almost continuously, releasing 2 million eggs a year, and they have few predators or competitors in their new home.

“At first people thought they were funny, beautiful,” says Mark Vermeij, a conservation biologist at the Caribbean Marine Biological Institute on the island of Curaçao. But opinions changed as the lionfish took over, he says. “Quite quickly they were everywhere. They were like cockroaches.”

Since they were first spotted near Fort Lauderdale, Florida, in 1985, lionfish have colonized more than 4 million square kilometres — throughout the Caribbean Sea, the Gulf of Mexico and all along the Atlantic coastline of the southern United States — and show no signs of relenting. Marine ecologists worry that the invasion will eventually extend to Uruguay, stopped only by winter water temperatures. It could become one of the most ecologically harmful fish introductions in the western Atlantic, says Mark Hixon, a marine ecologist now at the University of Hawaii at Manoa, and Green’s supervisor at Oregon State. At some sites off the coast of North Carolina and in the Bahamas, the populations are 5–15 times denser than in the fish’s natural range, sometimes even reaching 400 fish per hectare.

The conquest could have profound effects on the biodiversity of coral-reef ecosystems. Lionfish consume whatever fits in their maws — and a lot of it. A DNA analysis3 of the stomach contents of 157 lionfish caught in the Mexican Caribbean identified 43 crustacean and 34 fish species, including parrotfish, French grunt and graysby — important sources of food for local people. Without natural predators, a lionfish can gobble up 79% of the juvenile fish on a reef in as little as five weeks. 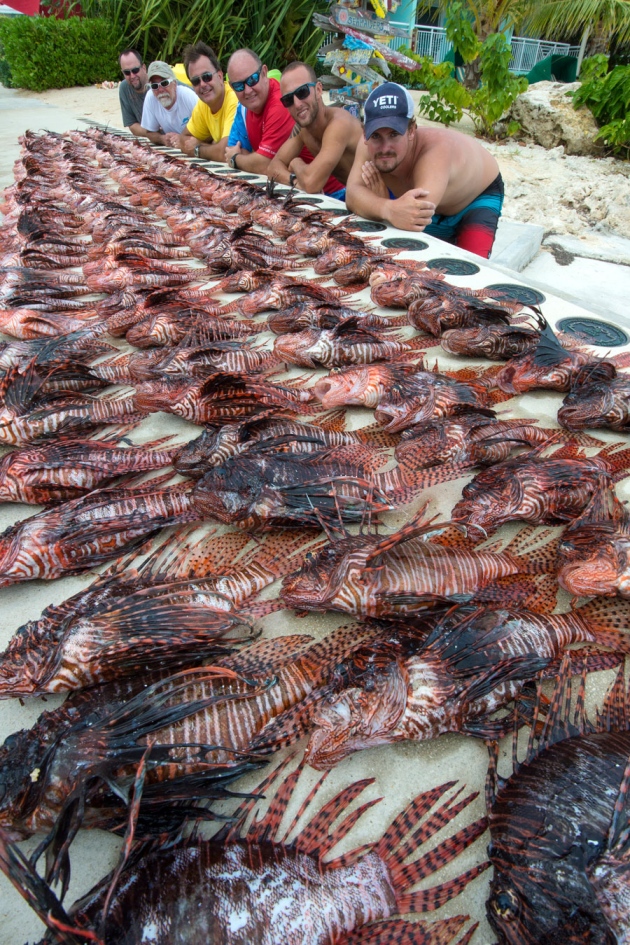 Divers lay out their haul from a single-day culling effort intended to drive down lionfish populations around the Cayman Islands.

The feeding frenzy could also lead to larger problems. Some of the fish they prey on clean algae off coral reefs and are already overfished in the Caribbean. Without these essential species, algae could outcompete the corals. Simulations by Jesús Ernesto Arias-Gonzàlez at the Center for Research and Advanced Studies of the National Polytechnic Institute, in Mérida, Mexico, have shown that a lionfish invasion would decrease the biomass of corals in a Caribbean reef by about 10% within ten years4.

Green did not set out to study lionfish. She had just started a doctorate in conservation biology when she travelled to the Bahamas in 2008 with her adviser Isabelle Côté, a biologist at Simon Fraser University in Burnaby, Canada. A student they visited was seeing lionfish all over her study sites. “Nobody knew anything about them, the basics of where they were, or what they ate,” says Green.

Green and Côté wondered whether the native fish would return if they removed the lionfish. In December 2009, they staked out 24 patches of reef and arranged for scuba divers to prune the population of lionfish at the sites every month for 18 months. They predicted that the culling effort would need to remove 25–92% of the predators, depending on the site, to keep them from consuming too much of the prey species. By the end of the experiment, the native fish had rebounded by 50–70% in the reefs that reached the targeted level of protection5. 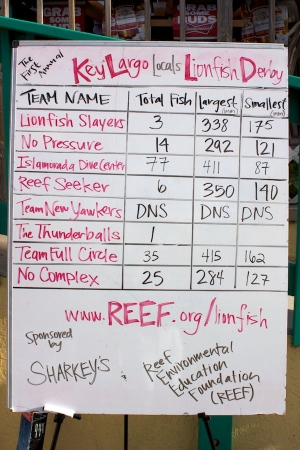 A scoreboard tallies some of the catches by rival groups at the first lionfish derby in Key Largo, Florida.

Green and Côté were not the only ones to hunt down lionfish. Earlier that year, the Reef Environmental Education Foundation (REEF) in Key Largo, Florida, had started running derbies in the Bahamas to increase local awareness of the invasion. Green, who had been collaborating with the foundation during her PhD, got involved in planning the first hunts.

She later decided to use the competitions to test whether limited hunts could have an impact. With the help of volunteers outfitted in scuba and snorkels, Green counted lionfish at 60 sites before and after the derbies in Key Largo and the Bahamas in 2012 and 2013. On the basis of a preliminary analysis of the derbies, she says, “there were dramatic drops in the densities of lionfish in the sites where people fish.” After the competitions, lionfish densities were slashed by more than 60% over a 100–150 km2 area compared with pre-derby levels. “It’s like pulling weeds from your garden,” she says. “You’re not going to completely get rid of them, but below a certain level, they won’t cause problems.”

Lionfish recolonized the sites within six months, but the animals were significantly smaller, which helped to reduce pressure on the reef. Smaller lionfish eat less, prey on smaller fish and produce fewer young.

Ted Grosholz, a marine ecologist at the University of California, Davis, says that the data collected by Green and REEF support the idea that derbies can effectively control lionfish populations in selected areas. They also dovetail with results from other lionfish control efforts. When the fish invaded the Dutch Caribbean in 2009, volunteers immediately began to use spear guns to remove lionfish from the island of Bonaire, but did nothing in neighbouring Curaçao. After two years of spearfishing, Vermeij and his colleagues found that the lionfish biomass in the treated areas of Bonaire was just one-third of that in the unfished areas, and about one-quarter of what was seen in Curaçao6.

The lionfish contests have been much more successful than some other efforts that have used hunters to control invasive species. In 2013, for example, the Florida Fish and Wildlife Conservation Commission organized the first Python Challenge, a month-long event with cash prizes that enlisted professional and amateur hunters to remove Burmese pythons (Python bivittatus). But the pythons proved tough to catch because they are hard to spot in the Florida brush; the hunters caught just 68 snakes from a population that is estimated at 30,000–100,000.

“Quite quickly they were everywhere. They were like cockroaches.”

Jason Goldberg, a biologist at the US Fish and Wildlife Service in Arlington, Virginia, says that derbies could be improved by incorporating the results of research. Organizers need to calculate how many individuals to remove, whether it is better to cull older or larger individuals and how their density affects the health of the population. That information can then be used to set hunting targets  — and prevent the kinds of problems that arose when Australia culled red foxes (Vulpes vulpes). The 2002–03 Victorian Fox Bounty Trial removed one-fifth of the state’s red foxes but ended up boosting the population because the survivors thrived when they had less competition for food7.

Cash incentives can help by drawing amateurs into efforts to control invasives. In the Pacific northwest, for example, anglers are offered $4–8 for every northern pike minnow (Ptychocheilus oregonensis) they capture to deter the fish from preying on young salmon. The programme has removed more than 3.9 million fish and slashed predation by 40%.

Goldberg says that research on lionfish derbies should offer insight into how often — and when — they should take place at each location. He adds that new steps might be needed, such as encouraging commercial fishing of lionfish to make the species more common in restaurants. 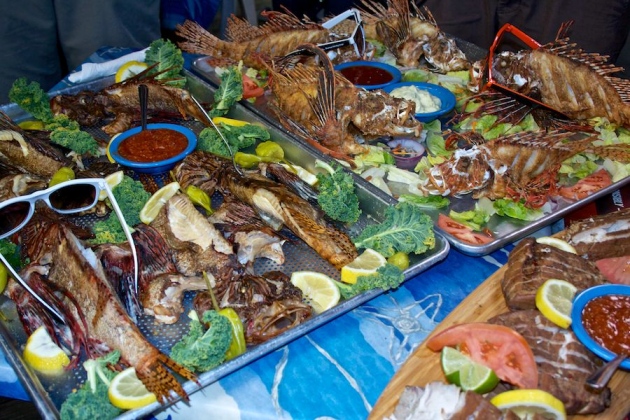 Fish captured during derbies are cut up and cooked for the contestants. Efforts to get lionfish onto restaurant menus could help control the populations.

The lionfish invasion and the success of the derbies has led to policy changes in Florida. In August, wildlife regulators relaxed hunting restrictions in the state to allow divers wearing rebreathers — devices that allow them to remain in the water for longer — to harvest lionfish. It will also now allow derby participants to spear lionfish in areas where spearfishing is otherwise prohibited. “For marine protected areas to function as conservation areas, it’s important that the biology and ecology be conserved to the highest level possible, and that now requires lionfish control,” says Morris.

With her results pointing in a positive direction, Green intends to continue analysing data from lionfish derbies, including an event in Key Largo on 13 September. When she shares her research findings with the divers, it tends to fire them up, she says. “There’s this good community feeling at the derbies that this is a tool that can have a positive effect and help to suppress the invasion.”