When police officers, scientists and doctors launched an investigation into the scourge of counterfeit medicines in South East Asia, they were shocked to find that nearly half of the anti-malarials that they seized were fakes. Even more alarming was the discovery that many of the blister packs presumed to contain life-saving tablets were tainted with safrole, a carcinogenic compound used to make the illicit party drug ecstasy.

The presence of safrole underscored the link between bogus pharmaceuticals and criminal syndicates, which flourish in a legal grey zone that rewards counterfeiters with high profits at low risk. 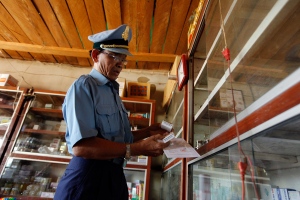 “For a criminal interested in making money, it’s less dangerous to traffic in counterfeits than to traffic in illegal drugs,” says Susanne Keitel, director of the European Directorate for the Quality of Medicines and HealthCare (EDQM) in Strasbourg, France. That is because, although counterfeits endanger patients, diminish public faith in essential care and hamper economic growth, their deliberate manufacture is classified not as criminal activity, but as patent infringement.

That may now change, as cross-border collaborations try to criminalize counterfeit drugs and coordinate global enforcement. Public-health authorities welcome the development, but say that years of inattention have turned the problem into a crisis.

In a week-long raid last year, the international police agency INTERPOL, based in Lyons, France, confiscated 2.4 million pills in dozens of countries. However, seized contraband provides only a crude indicator of the trade's true scope. The global counterfeit drug economy has been valued at US$75 billion a year, and is projected to grow by up to 13% annually.

Danny Lee-Frost, head of operations at the Medicines and Healthcare Products Regulatory Agency in London, says that in developed countries, border agencies intercept most illicit trade before it reaches markets. But poorer nations lack equivalent protection. The World Health Organization (WHO) reports that in developing economies, nearly one-third of drugs are either fakes or substandard.

Paul Newton, a doctor of infectious disease from Oxford University, working in Vientiane, Laos, says that regulating drug quality “requires political will, scientific expertise and solid data” — all of which are scarce in countries ravaged by poverty and infectious diseases.

But the most formidable barrier has been the lack of consensus on how to classify counterfeits. Efforts to establish a universal definition are caught in a tug of war between safeguarding public health and protecting intellectual property. Bryan Liang, a physician and lawyer at the California Western School of Law in San Diego and vice-president of the Partnership for Safe Medicines, argues that prevailing definitions “prioritize private interests at the expense of health” by treating fake drugs mainly as an intellectual-property issue.

The medical community insists that counterfeit medicines should not be placed in the same penal class as other imitation goods. “The main people affected are patients and their families, not pharmaceutical companies and their traders,” says Newton. “Fake antimalarials cause more harm than fake Rolexes. They should be treated differently.”

Last October, the Council of Europe invited countries to become signatories of the MEDICRIME Convention, the first international treaty to establish counterfeit medicines as a criminal threat. So far, 15 countries have signed on. Although none has yet ratified the document, Keitel is “absolutely confident” that it will become law in the signatory countries. The legal department of the EDQM, which oversees the convention, anticipates that the treaty will be fully ratified by the end of 2013.

In late 2011, US policy-makers made a similar move, introducing the Counterfeit Drug Penalty Enhancement Act, which distinguishes fake drugs from other sham goods and increases the prison sentences and fines associated with prosecution for their manufacture and trade. The act is now under deliberation in Congress.

Furthermore, the WHO is set to propose a mechanism for harmonizing global enforcement in May, at the World Health Assembly in Geneva, Switzerland. The scheme will exclude trade and intellectual-property considerations and focus solely on counterfeits as a humanitarian crime.

But even with new definitions in place, limited resources and inadequate infrastructure may continue to impede quality assurance. “Most emerging-market countries don’t have the capacity to regulate drug quality,” says Liang.

To improve enforcement, researchers are developing new ways to detect fakes. For example, the pharmaceutical company Merck, based in Darmstadt, Germany, has sponsored the Global Pharma Health Fund Minilab, which can assess the quality of 57 different compounds. According to Merck, nearly 500 kits have been distributed in 80 countries. However, independent assessments suggest that although the kit provides quick and relatively cheap results, it detects a fake only if the product is grossly substandard.

Harparkash Kaur, a chemist at the London School of Hygiene & Tropical Medicine, and her colleagues at the US Centers for Disease Control and Prevention in Atlanta, Georgia, are developing an assay to gauge the level of the active ingredient artemisinin in antimalarial medicines. They plan soon to make it available as a field kit simple enough for a lay person to use and interpret.

But poverty and profit remain at the heart of the problem. Newton says that as long as money can be made off vulnerable people, counterfeiters will persist. “Part of the solution is to make drugs more affordable and more accessible,” he says. Increasing drug availability, adds Newton, will reduce counterfeiters’ profit margins and protect global health.