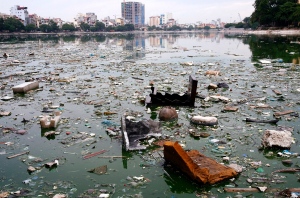 Research into the supply and vulnerability of fresh water is a priority of the Future Earth project.

An international, interdisciplinary research partnership that was announced yesterday at the Planet Under Pressure conference in London could shake up research on global environmental change.

The Future Earth initiative aims to bring together the practitioners, funders and users of research to develop programmes to address environmental, societal and economic challenges such as access to water and food, and vulnerability to extreme weather. It will run for 10 years, and hopes to help attract several billion euros in research funding each year.

“This initiative will link global environmental change and fundamental human development questions,” said Diana Liverman, a geographer at the University of Arizona in Tucson and co-chair of the team that designed the initiative, in a statement. “Only by actively engaging natural sciences, social sciences and humanities can we provide a full understanding of global change and its impact on societies and ecosystems.”

The partnership is sponsored by the International Council for Science (ICSU), a non-governmental organization based in Paris that works to strengthen international research on issues affecting society. Future Earth will integrate four ICSU-led programmes: the International Geosphere–Biosphere Programme, based in Stockholm; DIVERSITAS, a biodiversity initiative in Paris; the World Climate Research Project in Geneva, Switzerland; and the International Human Dimensions Programme on Global Environmental Change, based in Bonn, Germany.

Future Earth's initial focus will include coastal vulnerability, freshwater security, ecosystem services and vulnerable societies. Its partners, which include the United Nations Environment Programme in Nairobi, will help to define research priorities and develop research programmes.

Future Earth aims to establish a secretariat in 2013 with a budget of around €10 million (US$13 million), roughly double the combined budgets of the four existing programmes that it will absorb.

The initiative will not have a central budget for research. Instead, participants will seek money from funders including research and international development agencies.

Liverman says that the arrangement will make it easier for projects to win funding, because the research programmes are designed in partnership with research funders and users.

But not everyone is convinced that the change is for the better. One concerned biodiversity researcher at Planet Under Pressure said that Future Earth seemed to focus too much on biophysical issues and not enough on biodiversity. He was concerned that the DIVERSITAS programme would suffer under the new arrangement.

On 28 March, one of the Future Earth partners, the Belmont Forum, made a €20-million joint call for proposals to study the health, function and environmental vulnerability of freshwater and coastal systems. The forum, based in Washington DC, is an alliance of international research funders and science councils including the French National Research Agency and the US National Science Foundation. Projects will be co-funded by research councils from the G8 group of the world's wealthiest countries.

Proposals should be for projects lasting up to three years and costing up to €2 million. They must include natural and social scientists from at least three participating countries, and show links to research users such as policy-makers and regulators. Participating countries will fund their own researchers, but proposals will be judged in a single peer-review process.

The call will open on 15 April and close on 20 July. Funding decisions are set to be announced in April 2013.