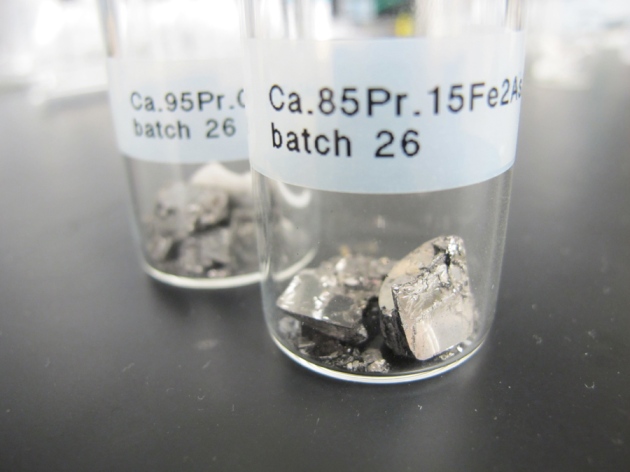 Crystals of an iron compound may contain regions that superconduct at higher temperatures than the bulk.

It is one of the more counter-intuitive stunts in the repertoire of scientists who study superconductivity. Stack two mat­erials, even insulators, on top of one another and voilà: a dramatic drop in electrical resistance can emerge between them. The negligible resistance of superconducting materials, sought for applications such as highly efficient electric grids, typically emerges at temperatures close to absolute zero — and only in certain materials. But physicists have shown that the stacking effect, called interface superconductivity, can occur at temperatures up to almost 80 kelvin. 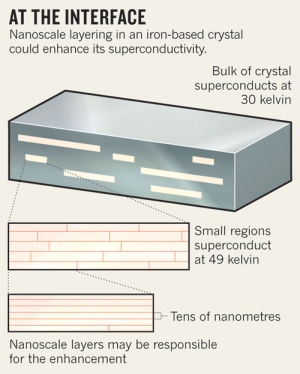 Now, a researcher says that interface superconductivity can exist in a single crystal of an iron-based superconductor. The discovery will rejuvenate work on a family of compounds that first showed high-temperature superconductivity in 2008, but in recent years had seemed to disappoint.

“This is something conceptually very new,” says Anvar Zakhidov, a physicist at the University of Texas at Dallas. “It raises fundamental questions that people will jump on.”

The provocative result comes from a superconducting pioneer: Paul Chu of the University of Houston in Texas. In the 1980s, he helped to discover the first high-temperature superconductors, a family of copper-containing compounds (see ‘All in the family’). In a paper posted on the arXiv preprint server on 30 August1, Chu and his colleagues now report their work on an iron-based crystal that generally superconducts at 30 kelvin — but that contains small regions that superconduct at 49 kelvin. Chu proposes that the effect is the result of many interfaces forming tens of nanometres apart within these regions (see ‘At the interface’).

Superconducting temperatures have risen as new classes of material have been found. 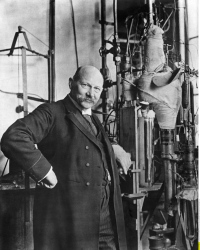 2008
50 kelvin: Layered insulating and metallic copper oxide. One of the first interface-enhanced superconductors.

If that is the case, it would be the first time that interface superconductivity has been detected in a stable, stand-alone crystal, instead of at the interface between separate materials that often deteriorate on heating.

Physicists searching for a material that superconducts at room temperature (290 kelvin or more) have been disappointed before: almost three decades of work with the copper compounds have failed to produce one. After iron-based superconductors burst onto the scene in 2008, chemists began tweaking them, and quickly brought superconducting temperatures above 50 kelvin. But then progress plateaued.

That changed in February last year2, when physicists at Tsinghua University in Beijing reported interface superconductivity at about 80 kelvin — above the temperature of liquid nitrogen. They had layered iron selenide, the simplest iron-based superconductor, with strontium titanate, a well-known insulator. “This was stunning — the fact that we are able to construct new superconductors artificially,” says Jean-Marc Triscone, a condensed-matter physicist at the University of Geneva in Switzerland.

But Chu’s result goes further. He has reported the effect in a single crystal of a calcium–iron–arsenide compound doped with rare-earth elements, and suggests that the interfaces sit between regions that are enriched and depleted with arsenic.

Superconductivity is a field with a long history of mistaken claims and false hopes, and so it is unsurprising that Chu’s result is provoking controversy. Critics say that it is difficult to measure superconductivity along narrow interfaces, let alone inside a crystal. And Johnpierre Paglione, a condensed-matter physicist at the University of Maryland in College Park, is dubious for a different reason. In 2012, he and his team reported3 a higher-than-expected superconducting temperature for regions within the same material. But in a paper posted on arXiv on 13 September4, the researchers say that what they saw is a bulk property of these regions, caused by the doping with rare-earth elements, rather than an interface effect.

If the superconductivity was related to interfaces, Paglione says, he would not expect it to disappear when the doping is reduced — which it does. Instead, Paglione suggests that strain in certain regions of the crystal enhances superconductivity. Chu responds that doping above a certain level helps to create interfaces by pushing arsenic atoms out of the structure.

Ivan Bozovic, a physicist at Brookhaven National Laboratory in Upton, New York, who in 2008 created one of the first interfaced superconductors, raises another possibility. He says that the superconductivity might not be an interface effect; instead, it could be attributable to a structural change inherent to the arsenic-depleted regions. He would like to see whether Chu can isolate these regions to study them further — and perhaps use them to create other interfaces. “We’ve been looking for new superconductors for 100 years and interface superconductivity is a new trick,” says Bozovic, “so there’s a lot of room for new combinations.”