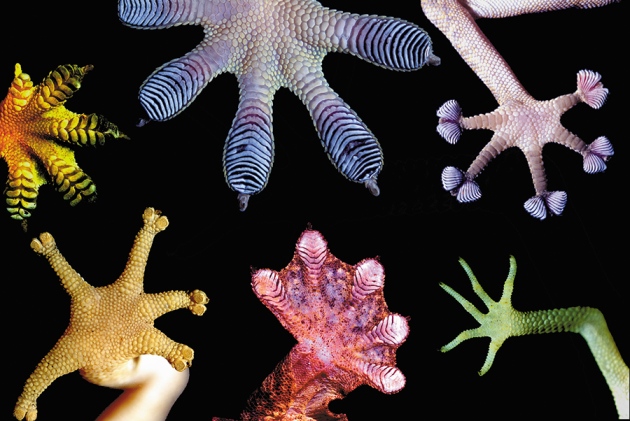 Studying the feet of a variety of gecko species would help scientists to design of a richer variety of dry adhesives.

In the late 1940s, Swiss engineer George de Mestral was inspired to invent Velcro after picking burrs from the fur of his dog. Five decades later, Japanese engineer Eiji Nakatsu, who had a passion for bird watching, designed a high-speed train with an aerodynamic front shaped like a kingfisher's beak.

Over the past decade, there has been a surge of interest in such bioinspiration and biomimicry — the imitation of biological traits or systems in applications ranging from architectural design and materials to robotics and engineered tissues1, 2 (see 'Trends in biomimetics'). The fervour is likely to be amplified by the emergence of the cheap and easy-to-use genome-editing tool CRISPR–Cas9, which has dramatically opened up the possibilities of altering organisms or their products.

Biomimicry successes in recent years include the mimicking of aquaporin molecules — proteins that form pores in the membranes of cells — for desalinization; the production of spider silk (which has a unique combination of strength and elasticity) from genetically engineered silkworms3; and the development of catalysts akin to components used in photosynthesis to improve the efficiency of solar power4.

Bioinspiration is poised to play a major part in efforts to solve problems relating to health, energy efficiency and food security. To realize this promise, researchers exploring such approaches need to take much greater advantage of the knowledge and expertise of biologists — be they ecologists, microbiologists or specialists in evolution, organisms, cells or molecules.

The field of biomimicry mostly involves chemists, engineers and materials scientists. Fewer than 8% of the nearly 300 studies on biomimetics published in the past 3 months and indexed in the Thomson Reuters Web of Science had an author working in a biology department — a crude proxy for 'a biologist'. And in most papers on biomimetics, the relevant biodiversity gets short shrift. In more than 80% of papers published on biomimetics in the past year, for instance, researchers consider only one species or refer to a biological element such as a 'cell' or 'enzyme' in only a generalized way. Moreover, across studies that explore diverse processes and systems, many of the same players come up: geckos, spiders and butterflies. 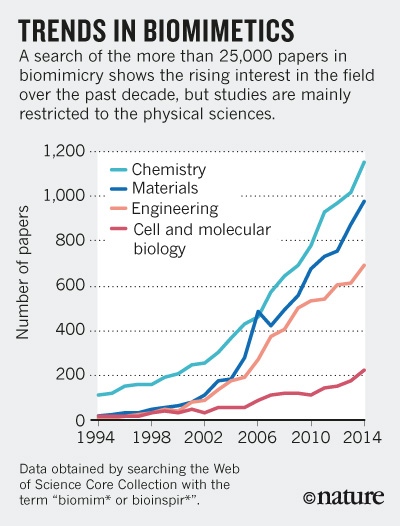 With around 1.5 million described species, and probably some 9 million eukaryotic species in existence, researchers pursuing biomimetic approaches have barely scratched the surface of biological inspiration. Biologists from all sorts of disciplines have an extraordinary store of knowledge that could guide forays into a much richer diversity of natural systems. Such knowledge could also help to steer experimental approaches.

On the one hand, an understanding of a particular organism's biology can inspire specific applications. Naked mole rats, for instance, which can live up to about 30 years — an order of magnitude longer than related rodents — may have adaptations that are relevant to the treatment of age-related diseases such as cancer. Indeed, experiments have revealed that an extracellular substance makes the cells of naked mole rats remarkably tumour-resistant5.

On the other hand, biologists can match a problem that a researcher may be trying to tackle to a specific species, environment or suite of evolutionary conditions. For example, an understanding of the general conditions that favour the evolution of altruism — such as a high probability of repeated encounters with recognizable individuals — may offer insights into how to design architectures and cityscapes that promote cooperation between people.

Evolutionary biologists, in particular, could help biomimicry researchers to use entire lineages of species to test general principles about how form and function relate to the environment. For instance, comparative studies of spiders indicate that different structural properties of silks have evolved as species have adapted to different environments6.

Comparative studies may also suggest ways around the limitations of copying a particular trait. Traits that have arisen through evolutionary processes, which depend on myriad factors such as the availability of genetic variation, are rarely perfect from an engineering perspective. A robotics engineer would not include a blind spot in a visual system, for instance. So researchers should draw inspiration from multiple systems; the camera-type eyes (like those of humans) that have evolved independently in octopuses do not have a blind spot. Many of the traits of interest in biomimetics — such as the dry adhesion of gecko toe pads or the iridescent coloration of butterfly wings7 — have evolved many times independently. This offers researchers different ways to produce a trait of interest.

Finally, biologists can help biomimicry researchers to explore processes that could make applications more feasible. Reproducing the dry adhesion of a gecko toe pad or the strength of a composite material such as abalone shell is difficult because of the complex nature of the structures involved2. To produce such materials economically at scale, some in biomimetics have turned to investigating how structures are built as well as the structures themselves. For example, photonics researchers, interested in manipulating light, have begun trying to understand the developmental processes that produce butterfly-wing scales8. And directed evolution is being used in the laboratory to produce new biocatalysts from pre-existing enzymes9.

Various funding sources are increasingly supporting research that encompasses blue-sky biological research and more applied fields. Translational-research centres, such as the Engineering Research Centers programme funded by the US National Science Foundation, are being established to help to tie basic research to the development of applications in industry10.

First, changes to education could encourage budding biomimicry researchers to embrace more biology. Currently, undergraduates who end up pursuing work in biomimicry are trained in the 'application field' of their choice — be it engineering, architecture or chemistry. Such students should be required to take courses in the area of biology that is likely to be most relevant to them: perhaps molecular biology for those pursuing chemistry, or organismal or evolutionary biology for those pursuing materials science or architecture.

Second, we need textbooks that distil the essential principles of specific branches of biology for biomimetic approaches; existing texts focus more on the applications.

Third, matchmaking initiatives are needed to promote collaboration. Existing conferences on biomimetics — such as the International Conference on Bioinspired and Biobased Chemistry and Materials, or the International Conference on Bio-inspired Systems and Signal Processing — could offer symposia or incentives to attract biologists. Special events in the style of speed dating could allow biologists and those interested in bioinspired applications to partner up based on their probable ability to solve a problem together. Online matchmaking sites might serve a similar purpose.

Last, companies could bring in broadly trained evolutionary and other biologists, for instance through 'biologist-in-residence' programmes. Such collaboration would fast-track robust solutions, by enabling teams to explore innovations from across the tree of life.