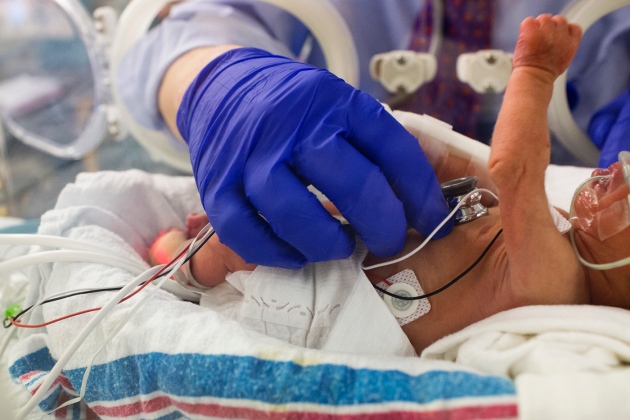 Babies born prematurely are at higher risk for some health problems.

Despite strides in maternal medicine, premature birth remains a vexing problem for obstetricians worldwide. But an analysis of medical records from almost 3 million pregnant women in California1 suggests that a surprisingly simple intervention — better sleep — might help to address the issue.

Researchers found that women who had been diagnosed with insomnia or sleep apnoea were about twice as likely as women without sleep disorders to deliver their babies more than six weeks early.

“It seems obvious, but strangely this study has not been done before,” says Laura Jelliffe-Pawlowski, an epidemiologist at the University of California, San Francisco (UCSF), and an author of the research, which was published on 8 August in the journal Obstetrics and Gynecology1. “Seeing this relationship is important because we are just starved for interventions that can make a difference.”

Public-health experts say that better treatment for pregnant women with serious sleep disorders could save babies' lives, and do so with approaches that avoid the use of medication. Every year, 15 million babies worldwide are born prematurely — more than three weeks before the typical full-term pregnancy of 40 weeks. These children have less time to develop in the womb, and 1.1 million will die from birth-related complications. Many others are left with hearing impairment, learning disabilities, cerebral palsy and other health issues.

The new study is part of the UCSF Preterm Birth Initiative, an ambitious US$100-million effort to study prematurity, focusing on California and East Africa. The researchers working on the effort plan to mine large quantities of historical data, ensuring that any findings are statistically significant. They hope to use these findings to identify medical and social interventions that could reduce preterm births, and test them in trials of pregnant women.The programme is funded by the Bill and Melinda Gates Foundation and philanthropists Lynne and Marc Benioff.

Jennifer Felder, a postdoctoral researcher in clinical psychology at UCSF who led the study, says that she had been troubled by the lack of research on sleep and pregnancy. Because pregnant women often have some difficulty sleeping, she suspects that doctors and researchers had not thought to examine the consequences of sleep disorders more closely.

Felder and her colleagues acquired the records of almost three million births that took place in California between 2007 and 2012, which were scrubbed of identifying information but linked to hospital-discharge papers from the women who had given birth. Each record contained a medical history of the mother and notes taken throughout her pregnancy and baby's delivery. Doctors had diagnosed about 2,300 of the women with a sleep disorder during their pregnancy. Insomnia and sleep apnoea were the main problems, although narcolepsy, excessive sleepiness and restless leg syndrome were also seen.

Insomnia, the researchers found, increased a woman's risk of preterm birth by 30%, while sleep apnoea increased the risk by 40%. Sleep disorders also increased the risk of very premature births: 5.3% of women with sleep issues delivered their babies at less than 34 weeks' pregnancy, compared to 2.9% for women without such a diagnosis.

Felder says that a lack of sleep is unlikely to be a direct cause of early births. But it could trigger other processes, such as inflammation, that eventually result in prematurity. A 2010 review of studies linked premature birth to the presence of the inflammatory proteins C-reactive protein and interleukin-6, in amniotic fluid2. To explore the idea, the UCSF initiative will soon begin to examine immune-system proteins in pregnant women using blood stored in a repository associated with California’s department of public health. The scientists will compare samples with an attention to premature birth and insomnia.

And in the meantime, sleep troubles in expectant mothers can alert doctors to potential danger. “I counsel women on how to have the best pregnancy outcome,” says Louis Muglia, the director of the Center for Prevention of Preterm Birth at Cincinnati Children’s Hospital Medical Center in Ohio. “Now I might start asking, 'do you get a good night’s sleep?'.”