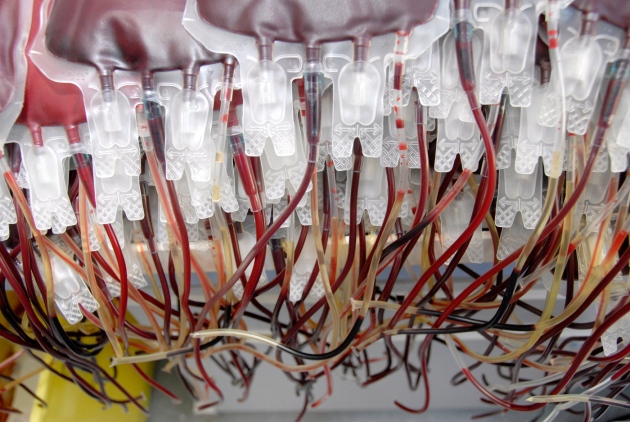 Donor blood from young people has been transfused into people with dementia.

The first controlled, but controversial and small, clinical trial of giving young blood to people with dementia has reported that the procedure appears safe. It has also hinted that it may even produce modest improvements in the daily lives of people who have Alzheimer’s disease.

Researchers who conducted the trial and others caution that the results are based on just 18 people and therefore are only a first step in exploring this type of treatment. “This is a really very small trial and the results should not be over-interpreted,” says Tony Wyss-Coray, a neuroscientist at Stanford University in California. The trial was conducted by his start-up company Alkahest, which is based in San Carlos, California, and was led by Stanford neurologist Sharon Sha.

The results suggest the procedure is safe and hint that it could even boost the ability of people with dementia to undertake everyday skills, such as shopping or preparing a meal. The team announced the results on 1 November and plans to present them on 4 November at the 10th Clinical Trials on Alzheimer’s Disease conference in Boston, Massachusetts.

The team tested people aged between 54 and 86 with mild to moderate Alzheimer’s disease. The team gave the 18 subjects weekly infusions for four weeks. They received either a saline placebo or plasma — blood from which the red cells have been removed — from blood donors aged 18–30. During the study, the team monitored the patients to assess their cognitive skills, mood and general abilities to manage their lives independently.

The human trial grew out of earlier ‘parabiosis’ experiments, in which the blood systems of two rodents are surgically joined together to see what happens when molecules circulating in one animal enter another animal.

Alkahest now plans to conduct a second, larger trial using plasma from which many proteins and other molecules have been removed. Wyss-Coray, whose group did most of the mouse studies that inspired the clinical trial1 told Nature that his experiments suggest that such a treatment could be more effective than using whole plasma.

Blood-transfusion trials are controversial because the active molecules in plasma that seem to lead to the purported effects are unknown.

Irina Conboy, a neurologist at the University of California, Berkeley, and her colleagues have performed extensive parabiosis experiments stitching together young and old mice that have been genetically matched. She has found that young blood clearly rejuvenates mouse tissues such as the heart and the brain2. But she says that the effects are probably coordinated by a complex orchestration of factors in the blood that needs to be understood more fully before moving to the clinic.

“The scientific basis for the trial is simply not there,” she says. “The effects of young blood on cognition have not been replicated by an independent group, and there has never been a test with a mouse model of Alzheimer’s.” She says that frequently exposing older people to foreign plasma may be unsafe, because hyperactivation of their immune systems could lead to autoimmune or inflammatory disease.

But, Wyss-Coray says, “Alzheimer’s patients don’t want to wait until the exact mode of action is discovered.”

He says that it is the first new approach for Alzheimer’s disease that is not based on the prevailing theory that the disease is caused by rogue amyloid-β or tau molecules in the brain, which has so far failed to result in any treatments.

Blood transfusions used for this purpose do not require approval by the US Food and Drug Administration, and some American companies are already charging hefty fees for transfusions of blood from young people.