Informing clinical-trial participants of the risks they face is a cornerstone of modern medical research, and it is enshrined as a human right in international codes of ethics. But an influential group of ethicists and medical researchers warned at a meeting in Brussels last week that the process has become a box-ticking exercise focused more on offering legal protection to a trial’s organizer than actually protecting patients.

“We clearly identified there is an urgent need to do informed consent better,” says Ingrid Klingmann, chairman of the European Forum for Good Clinical Practice, a think tank based in Brussels and the organizer of the meeting. “The pressure is really huge on all those involved to better enable patients to understand the implications of their study participation, their benefits, risks and obligations.”

The European Clinical Trials Directive, which sets minimum standards for clinical trials conducted in the European Union’s member states, says that trial participants must be duly informed of the “nature, significance, implications and risks” of the clinical trial. Yet delegates at the meeting detailed a host of ways in which the system fails to meet those criteria.

Denis Lacombe, director of the Brussels headquarters of the European Organisation for Research and Treatment of Cancer, presented data showing that the median length of consent forms used in the organization’s trials tripled between 1995 and 2009 (see ‘Fatter forms’). In many cases “the informed consent is 20 pages of nothing”, says Harry Bleiberg, an oncologist formerly at the Jules Bordet Institute in Brussels who is now a medical consultant for the pharmaceutical industry. 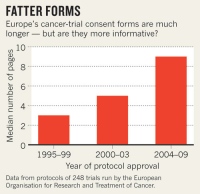 Other speakers showed that warnings of possible side effects are often vague, and jumble potentially serious problems among minor concerns. Details of the prognosis of the disease and the likely outcome of the treatment are often scarce.

Long, jargony forms mean that many patients have little idea what they are actually signing up to, says Dominique Sprumont, a health lawyer at the University of Neuchâtel in Switzerland. In a study of about 200 patients involved in cancer clinical trials in the United States who responded to a questionnaire, 63% were unaware of the additional risk associated with participating, and 70% did not realize that the treatments being offered were unproven (S. Joffe et al. Lancet 358, 1772–1777; 2001).

One solution presented at the meeting was to base forms on those used in Norway, where a short summary of the main aspects of a trial precedes more detailed information. And many delegates advocated a greater use of graphics and charts. “We will certainly work on a proposal for a template that includes a one- or two-page summary,” says Klingmann, who hopes to circulate the document to clinical-trial organizers around the world.

Some ethicists advocate digital consent forms, delivered by computer or smart phone. Interactive forms could lead participants through the consent process, and keep them more informed during the trial. They could also make it easier for researchers to obtain new consent if they need to change a study once it is under way.

Concern over the issue is not unique to Europe. Trials are increasingly ‘off-shored’ to less-developed countries, and several investigations have found poor consent procedures there. Last month, for example, GlaxoSmithKline was fined in Argentina over what the company describes as “administrative irregularities in the process of obtaining informed consent from a small proportion of patients” in a trial in which 14 children had died (the company is appealing the ruling).

The US Department of Health and Human Services is currently consulting about revising clinical-trial regulations, and looks likely to demand shorter, more understandable consent forms, although there is no specific deadline for a decision. “Our effort is to enable a patient who is contemplating enrolling in a clinical trial to have clear and full information to use in making a decision,” says Ann Bradley, a spokeswoman for the department’s Office for Human Research Protections. A number of US medical groups are backing the effort: the American Society of Hematology in Washington DC, for example, says that in addition to making the process less burdensome for researchers, shorter forms could help to increase the number of patients recruited to clinical trials.

Sprumont argues that the scientists involved in clinical trials should also work to improve the system. “Scientists must assume more responsibility,” he says.